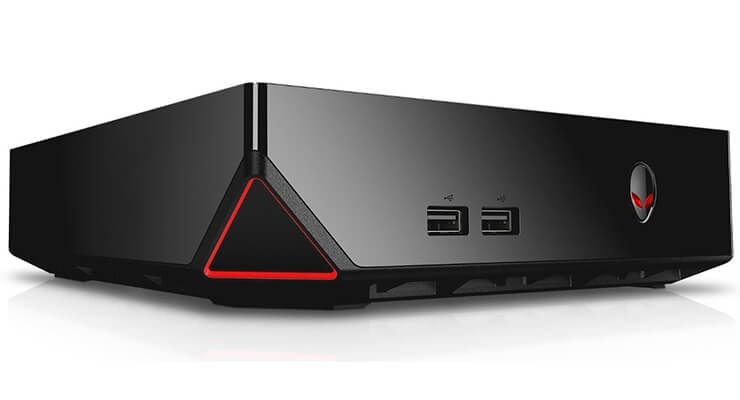 There seems to be a gap between gaming consoles, personal computers, and HTPC devices that, luckily, is starting to blur out as new devices come out. Devices like the NVIDIA SHIELD TV; Android media players with enhanced gaming capabilities, or even software alternatives such as the 10 best gaming addons for Kodi, that bring entertainment from these two -apparently distant- worlds into one single device, one single setup, for the ultimate goal of comfort and usability from your couch, which is made possible by devices such as wireless HTPC keyboards and other peripherals. To this myriad of devices bridging said gap, we add the most recent device from the guys at Alienware, in this Alienware Alpha review. [Read: Quick Lynec C120 review: great air mouse for your HTPC]

In this Alienware Alpha review we will take a look at a device that could receive many names, depending on what you want to analyze. You could say it's easily a candidate to the title of "Best HTPC Computer" or even the most amazing of the gaming computers on sale in the market right now. Whatever the name you use; the Alienware Alpha is a great HTPC Gaming PC option, which blurs the line almost unrecognizably between gaming and media, by doing things such as using a Kodi-based interface on its console mode -Kodi Hivemind, which by the way, looks awesome-. Being Kodi-based means you can install addons on it, so technically you could install Genesis addon to watch movies, or take your pick from the 10 best live TV addons for Kodi and bring the Alienware Alpha to even greater heights. Would its hardware support it?

We noticed in our Alienware Alpha review that it runs Windows 8.1 right out of the box, giving you the option to upgrade to Windows 10 at no cost. This enables you to get applications like Plex on Windows 10 or any other you might want to run in a Windows environment. This is the core of the gaming aspect of the Alienware Alpha, since you can pretty much play any game that runs on Windows and is supported by its hardware. Let's take a look at the technical specs of one of its models, the i3 one:

By connecting a wireless keyboard and mouse to this computer, you are able to turn on desktop mode; though at first it will only boot in console mode; which is the one powered by Kodi Hivemind. Since you can dedicate all the processing power to booting directly into the modified interface, you could expect a greater performance if you want to use this as a Kodi machine; and since this machine comes in different versions with i3 or i7 Intel processors, and you could get it with an SSD instead of an HD, the possibilities seem to be endless and only limited by your resourcefulness and, of course, budget. These computers are quiet and don't overheat, which makes the HD Storage version ideal to set up a home server as well. [Read: Gigabyte Brix Pro review: A powerhouse for your HTPC]

Alienware Alpha review: do you recommend it?

Personally, I have always thought that one of the most demanding tasks for computers is gaming; and machines optimized for this bring a great performance in every other field. If you want a computer you can use for multiple things, from gaming to media viewing, then this is a great option for you. Fast (except on booting from a hard drive), quiet and reliable, and with a Kodi-based interface such as Kodi Hivemind the Alienware Alpha is sure to bring hours of joy and entertainment to your setup.