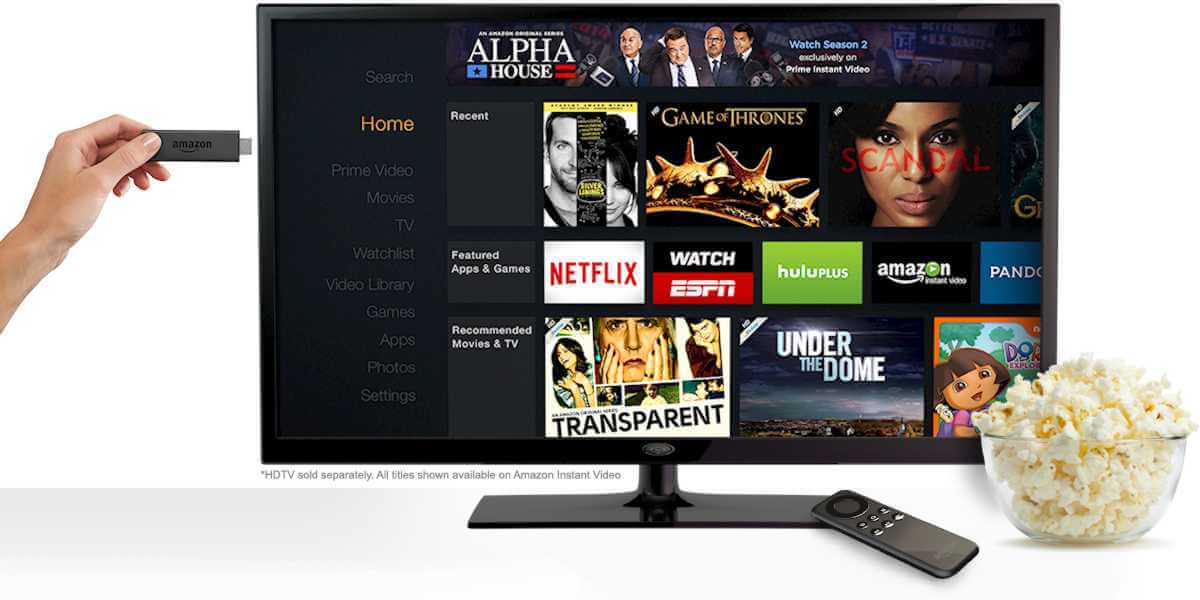 Amazon introduced the Amazon FireTV stick yesterday that connects to the TV directly through HDMI and streams high definition content from the internet or a local server. This in some ways makes it a viable Chromecast alternative or competitor to the Roku streaming stick. But in my opinion, the Amazon Fire TV streaming stick can be a game changer in some ways because of not only its hardware but also what might be possible on it (hint: low power XBMC media center?). It retails at $39 (unless you were lucky enough to get the $19 deal), and takes Amazon Prime membership experience to another level. Personally, I am already in for what it offers for a measly $19 (Yes, I got in!). [Read: Send media stored on your Android device to your TV using AllCast]

The Amazon Fire TV stick comes with a dual core process, 1 GB RAM, 8 GB storage, dual-band MIMI Wifi, and HDMI out. This clearly makes it a winner among existing comparable products such as Google Chromecast. Actually it could be a better Roku streaming stick alternative. [Read: 3 Best Raspberry Pi Alternatives in 2014]

Amazon has never hesitated to publish a comparison of how their product stands up against its peers, in this case the Chrome cast and the Roku streaming device. Take a look at the comparison yourself.

Let us keep in mind though that the Chromecast, compared to Amazon Fire TV Stick, functions in a different. While Chromecast casts your screen (from compatible apps) on your TV, the Amazon Fire streaming stick mainly streams content directly. Screen-casting is possible to a certain extent and may improve more in future. It is basically the miniature version of the full-blown Amazon FireTV that sells for $80 to $90. If I had $40 to spend today for a wireless streaming device, I would spend it on Amazon FireTV stick than a chromecast. [Read: Chromecast vs Apple TV – Which is worth your money?]

In my opinion, the Amazon FireTV HDMI stick is better than Chromecast not only because of hardware but also what it is capable of doing. Once again let us keep in mind that I am a person who likes direct media streaming devices and find it a hassle to screencast from mobile devices. If you you like screencasting then at least at this point you will find the FireTV HDMI Stick from Amazon to be a bit limiting compared to Chromecast. [Read: How to setup Chromecast using your phone or tablet?]

I might have sounded like an Amazon fanboy but I assure you that it is just my excitement around what might be possible with Amazon FireTV stick in the coming days (Plus, no wires = high WAF[Wife Approval Factor]). After some of the awesome developers hack into the device and find a way to root it, it could be turned into a full-blown Kodi Media Center. The hardware is more than capable of handling streaming from local network. In it is original form it definitely stands up to the Roku Streaming Stick but after rooting and installing custom ROM it could be even better. If you like voice commands though you will have to shell out extra $30 to get the capable Amazon FireTV voice remote. If you are not a fan of Kodi then no issues, you will still have a ton of use for the Amazon FireTV Stick.