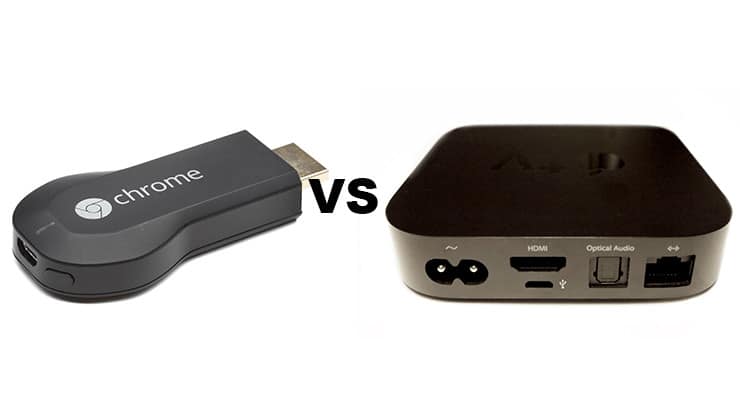 At first glance, this topic of Chromecast vs Apple TV seems straightforward. Android users tend to be drawn toward Chromecast while iPhone users look into Apple TV. It's actually a bit more involved than that. Both devices have their own strengths and weaknesses. Purely from a sales perspective it seems that Chromecast has a clear lead over Apple TV with nearly double the sales in 2013.

We're going to go category-by-category in this article. You'll have to choose which categories are most important to you. For some people this will mean price, for others it may be app support.

If you're looking for a simple media streaming solution, either one of these can be a good choice. Design, price, app support, and specs will be the main things to cover here. [Read: 3 Best Raspberry Pi Alternatives in 2014]

The place where Chromecast and Apple TV are the most dissimilar is design. There is a very noticeable difference in design, but the preference tends to come down to personal taste.

The Chromecast device is very similar in design to that of a normal USB memory stick. This makes it very compact - which would normally make it the winner in design for most people - unfortunately, it can't actually draw power from the HDMI port and instead needs to plug into a USB port as well as the HDMI port. While this isn't a big deal, it's a slight encumbrance. Overall, the Chromecast setup is extremely painless. On the upside... unlike the Apple TV, Chromecast does not need to be in view since it is controlled via smartphone. [Read: How to setup Chromecast using your phone or tablet?]

Apple TV's design is quite different. Aesthetically it looks quite nice. The device is a small rounded black box that is very reminiscent of other Apple products. Included with the Apple TV is a remote - which means you'll need to find a place to put the Apple TV in order for the remote to be within line of sight.

Quite possibly the most important difference between Apple TV and Google's Chromecast for many consumers is the price. The Chromecast comes in at a very affordable $35 while the Apple TV is $99. While it's hard to argue against Chromecast's low price-point, it's more of a dumb receiver that simply streams content from a mobile device. Apple TV on the other hand, is a dedicated media device with a remote control that doesn't require a smartphone or tablet.

Neither of these are particularly bad, but should be kept in mind when making a decision.

Apps on Apple TV vs Chromecast

This is where these two devices are most evenly matched.

Apple TV apps are included on the device itself. This includes almost all of the big names such as: YouTube, Netflix, Flickr, Hulu, etc. Of the Apple TV apps though, there is one missing, which is Amazon Instant Video.

Chromecast apps are a bit different. Since the device is a simple receiver, it has no interface at all - it requires a smartphone or tablet to function. You then send your content from your mobile device and it plays through Chromecast. This is called 'casting' and is basically the same as Apple's 'AirPlay'. Chromecast apps include: Google Play, Hulu, Netflix, Pandora, YouTube, and more. For more about casting with Chromecast read our guide on how to send media stored on your Android device to your TV using AllCast

On Chromecast vs Apple TV streaming, both 'casting' and 'AirPlay' involve streaming content from a mobile device through the receiver. The difference is that Apple TV doesn't require that you use AirPlay apps while Chromecast won't work without casting.

Now, the real question Chromecast or Apple TV? It's difficult to simply tell you which device you should pick. The biggest dealbreaker for most people - apart from price - is that Chromecast apps are centered on a mobile device while Apple TV apps can be on the device itself. If you don't have a compatible device to stream into Chromecast, you may want to go with Apple TV. Not only are most of the Apple TV apps integrated into it, but some people prefer having the remote control for Apple TV rather than using their smartphones or tablets. [Read: A simple yet awesome IR Raspberry Pi remote control for $5]

If you have a compatible device to cast to Chromecast and don't mind not having a remote - it might be the better choice, simply because of the price difference. Keep in mind that an Android device won't be able to connect to Apple TV. Finally, the list of Chromecast supported apps is currently a little bit wider than that of Apple TV.