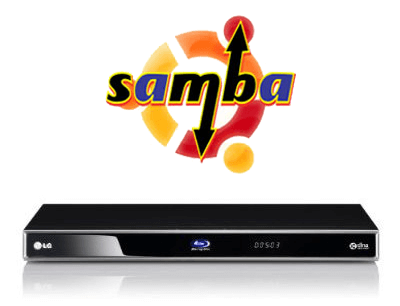 I recently purchased the LG 42LE5400 LED-LCD 42 inch TV and the LG BD570 Network Bluray player basically to stream movies from my Ubuntu Lucid Lynx 10.04 Home Server. Recently, I described how to stream content from network server on these devices using MiniDLNA. In this post, I will describe how to configure LG Bluray Player Samba Share.

Initially, I was disappointed that the LG BD570 cannot could not connect to my SMB share on my Linux Home Server. However, today I fixed this problem. Note that this might work on other LG bluray players such as BD590 and BD390 as well. So here is how I did it.

The bluray player failed to recognize the SMB share on my Linux server. While the DLNA server appeared on the server list, the SMB / CIFS server did not.

Today, I identified that the problem was due to Linux firewall. Even though incoming connections on SMB ports TCP/UDP 137-139 and 445 were allowed the share did not appear on the player's server list. So I disabled my firewall as follows:

Now there were two media servers on the list: 1) My-MiniDLNA Server and 2) My-SAMBA Server. My smb.conf file looks like this:

Thats it. You should now be able to browse your folders and play content. I am not able to videos with subtitles.