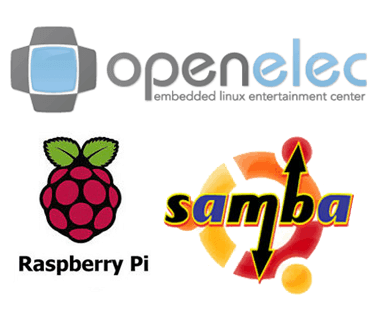 Configuring OpenELEC Samba share allows you to remotely access your Raspberry Pi's SD card and any attached USB drives over the network on other computers. This can come in handy if you want to transfer files between the devices over the network and without having to physically connect the drives. This can also be of help if you want to edit configuration files or XBMC files using a GUI text editor instead of over SSH and commandline. Almost all current media center distros, such as OpenELEC, Xbian, and Raspbmc, for Raspberry Pi come with SAMBA pre-installed. In this post, I will show you how to enable and configure OpenELEC Samba share on Raspberry Pi. While the enabling part can vary based on the distro, the SAMBA configuration part very similar in the 3 distros.

There are two ways to enable OpenELEC SAMBA share. First way is to enable it during the OpenELEC first boot when you go through the initial setup wizard. Check the enable box in the wizard screen, as shown in the picture below, to enable SAMBA.

If you did not enable SAMBA on OpenELEC for Raspberry Pi during the initial setup, don't worry. Just visit the OpenELEC settings and you will find the option to enable OpenELEC SAMBA server under services, as shown in the picture below.

If you would like to securely access your SAMBA shares on Raspberry Pi, you may enable password authentication for SAMBA in the above screen. The default username and password are both "openelec" (case-sensitive), which you may change to anything of your choice. In this example, I am just going to leave password protection off as I do not have anything sensitive on my Raspberry Pi. I generally do a quick reboot after enabling any service just to be sure. Hey! OpenELEC boots in less than 30 seconds anyways.

While you can pop in your OpenELEC SD card into another Linux machine and create a Samba configuration file, I recommend accessing OpenELEC Raspberry Pi using SSH. After you have logged into your Raspberry Pi through SSH, issue the commands numbered 1 through 5 in the picture below.

Copy and paste the following contents to the "samba.conf" file in the SSH window.

If you are editing using nano editor, press Ctrl X and then W to save and exit. Reboot your Raspberry Pi by issuing "reboot" command in the SSH window. Your OpenELEC Samba Share should be up and running after the reboot.

Mounting SAMBA shares differ with each OS or file explorer. A good reference guide for various OpenELEC Samba share mounting options is available here. You will need to know the following:

On Ubuntu and other Linux systems you may follow what is described in this post. On Windows you can mount OpenELEC Samba share as network drive as shown in the picture below.

Provide the folder in the format "\\ipaddress\sharename". If you enabled password authentication for Samba, then check "Connect using different credentials" and type in the username and password. That is it. Enjoy remotely accessing folder and drives on your Raspberry Pi by enabling OpenELEC Samba share.