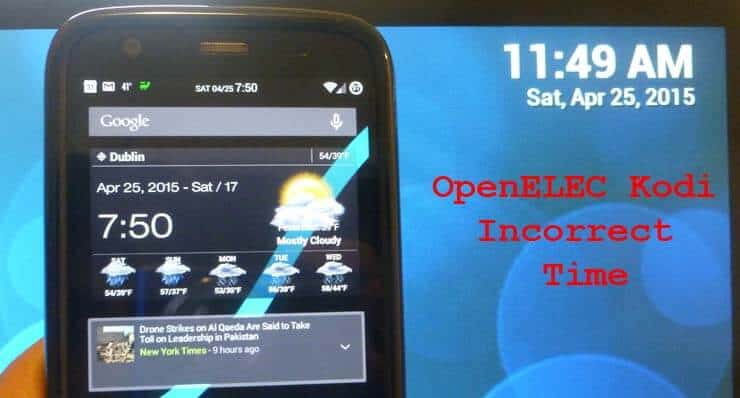 The first way is using commandline and SSH. While some may find this inconvenient many have found this to be sure-shot. To fix OpenELEC's time problem, SSH into your Raspberry Pi running OpenELEC (ensure that SSH is enabled on your Raspberry Pi. If you do not know how to SSH into Raspberry Pi, then check this guide.

SSH into your OpenELEC using the username "root" and password "openelec" and edit /storage/.config/autostart.sh file.

Save and exit. Assign execute privileges to the file using the following command:

Your OpenELEC incorrect time issue should be fixed after the next reboot. You may have to wait 30 seconds before time updates after booting. What the autostart script does is it automatically sets the time from the timeserver everytime during boot. [Read: How to run OpenELEC from USB Stick?]

Upadate (4/25/2015): This method has been confirmed to work on Raspberry Pi 2 running OpenELEC.

For many novice Linux / commandline users this might be an easier method as everything is done through the XBMC interface. Navigate to Settings -> Appearance -> International and set Kodi / XBMC time zone for your location as shown in the picture below.

In addition, you may have to set the time server in OpenELEC settings (as shown in the video below, I did not have to do this). Go to System -> OpenELEC -> Network and click on Timeserver #1. Enter pool.ntp.org and click Done. As soon as you set it, time should automatically correct itself. Watch this method in action in the video below.

After setting the correct time on OpenELEC, I have rebooted my Raspberry Pi multiple times and the Kodi timezone stayed intact. This may or may not work for you but you will lose nothing but a couple minutes in trying this out.

So there you go. If this or some other method worked for you please leave a comment and share with others. Hopefully, one of these methods fixes your OpenELEC incorrect time issue.