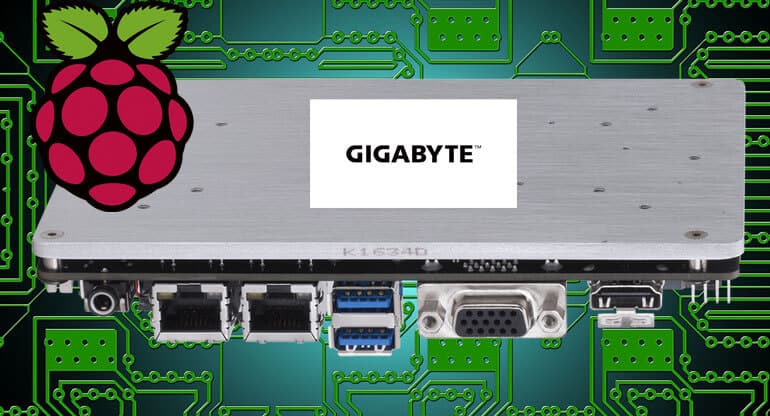 The Raspberry Pi is one of the top devices for tinkerers. Catering to the do-it-yourself (DIY) crowd, the Raspberry Pi is a single-board PC perfect for tons of projects. Among its many applications, Pi boards offer functionality as home theatre PC (HTPC) devices with distros like OpenELEC, low-power servers, and even DIY gaming machines. However, there's a Gigabyte Raspberry Pi alternative. Gigabyte's forthcoming GA-SBCAP3350 is an energy efficient, upgradable Raspberry Pi competitor. [Read: 15 most used SSH commands for Raspberry Pi - SSH for Raspberry Pi]

As CNX-Software reports, it's unclear whether the GA-SBCAP3350 targets the consumer market. Based on its form factor, the Gigabyte Raspberry Pi alternative may instead focus on the enterprise sector. As for operating system support, Windows 10 64-bit compatibility is confirmed. It's not specifically stated if there's Linux compatibility, but as ZDNet reports, that should be fine. [Read: Setup OwnCloud server with Raspberry Pi 3 - Private cloud storage]

Gigabyte's GA-SBCAP3350 isn't the most powerful single-board computer. However, it's a solid potential competitor to the Raspberry Pi. With its SSD storage, Windows 10 64-bit compatibility, and upgradable RAM, this Gigabyte Raspberry Pi alternative carries loads of potential. Yet it remains to be seen how Gigabyte releases the GA-SBCAP3350. If it's solely on the enterprise and embedded systems market, it's possible for consumers to obtain. Though pricing and availability might deter wider adoption. Additionally, real-world benchmarks will determine its applicability to the consumer market.

What this proves though is that manufacturers like Gigabyte should continue offering single-board PCs which offer additional features over the Pi. I use my Raspberry Pi as a retro gaming console and lightweight HTPC. But my biggest qualm is the lack of upgradability. Whereas I appreciate its small form factor, I'd like an upgradable RAM and CPU slot. Therefore, rather than buying a new Pi I can simply upgrade mine. Granted, at its low price point buying a new Raspberry Pi every few years isn't a major issue. Nevertheless, I'm excited to learn more about the Gigabyte Raspberry Pi alternative.

Your turn: What are your thoughts on the GA-SBCAP3350 Gigabyte Raspberry Pi alternative?