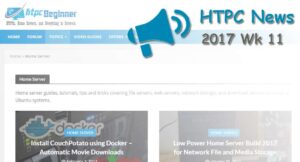 How to Watch Every March Madness Game on SHIELD

It's March, and with it comes March Madness. The NCAA basketball tournament remains revered among sports fans. While cord cutters benefit from a myriad of streaming options, most of these boast strong film and TV show content but lack sports coverage. NVIDIA features an excellent guide to watching stream March Madness games. Although it's aimed at the NVIDIA SHIELD Android TV, these options are compatible with most Android devices and even iOS and Roku streamers. The official March Madness app hosts every game. Premium subscription service CBS All Access airs every CBS March Madness match. SlingTV and PlayStation Vue paid streaming video providers also show March Madness games. [Read: 10 best Kodi sports addons in 2015 for your HTPC]

Nintendo Will Soon Have Netflix on Switch; Why it Wouldn't be a Game-Changer

Nintendo's Switch launched in March, 2017. Oddly, the gaming console debuted sans-video streaming options. Although the majority of game consoles since the Xbox 360 and PlayStation 3 allowed streaming from the likes of Netflix, Hulu, Amazon, Plex, and Emby, the Switch lacked streaming services at the onset. However Nintendo is in talks to usher video streaming to the Switch as reported by Polygon. Strangely, even handheld consoles like the PlayStation Vita and Nintendo 3DS sport Netflix support yet the Switch lacks streaming platforms. Moreover it doesn't even include a web browser.

While most users likely have at least a few other devices suited to streaming, Netflix compatibility is a basic functionality many consumers expect. At its core, the Switch is a game console first and media center second. However to fulfill user needs, the Switch will eventually see streaming apps.

Stremio Circle: A set-top box for all of your Stremio content

We have reviewed Stremio in detail and it is in on our list of top media server apps. Stremio continues to hone its streaming video platform. This week, Stremio kicked off a revamped iOS app. Additionally, Stremio made its foray into the hardware space. In a March 10, 2017 blog post Stremio announced its forthcoming set top box, the Stremio Circle. The tiny, spherical device runs the Stremio platform. It's configured so you can use your iOS or Android mobile device as a remote. Specs include an HDMI port, USB ports, a microSD card slot, and dual-band AC wi-fi. It's a system on a chip (SoC) S905X that's capable of 4K streaming and can handle VP9 and H265 content. While there's no release date announced, Stremio will offer progressive updates and you can sign up on the preorder list as well. Like OSMC with its Vero, Stremio too seeks to get into the set top box game. [Read: Guide: How to install Stremio on Linux, Windows, and Mac]

In its heyday, Kickass Torrents (KAT) ranked among the most used torrent sites. While it was shut down, and its owner Artem Vaulin arrested, KAT persists. It's back with a revamped look and feel at Katcr.co. Additionally, KickassTorrents plans to continues its tradition of a “Happy Torrents Day.” Torrent Day originated in 2011 and continues into the [resent. It's a celebration where uploaders opt to upload their torrents on that given day, March 30. So coming up at the end of this month is the sixth annual Happy Torrents Day. What's also important is that KAT's resurgence exhibits growing traffic and has yet to be taken down permanently.

Btw, ‘Get Out' isn't a Redbox, Vod, itunes movie. If you don't see it with the theater energy, you'll miss the full intended experience. ??

TorrentFreak reports weekly data on the most pirated movies. Its list offers a glimpse into download popularity. As a PC Mag write up points out, one of the films Logan is at the time of this writing, still in theatres. Does watching an HDCam rip of a massive blockbuster such as Logan do the film a disservice? As streaming, both legal a la the likes of Netflix, and less than legal continue to rise in popularity, the film watching experience migrates from the big screen to the home. Yet even if you've got a solid audio and visual set up, an HDCam video lacks the same quality as its original source, or even a Blu-ray or DVD rip. It's certainly a different dynamic. Even directors have begin weighing in on how viewers should experience their material. Jordan Peele commented that “Get Out isn't a Rexbox, Vod, itunes movie.” Rather, Peele implored viewers to watch Get Out in theatres.

7 Must have Addons for Kodi Maintenance 2017 – Backup, Library Update