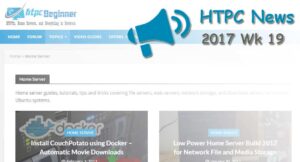 Welcome to the htpcBeginner HTPC News Roundup, May 12, 2017 edition! This week saw announcements of a Facebook video streaming service, an expanded Pluto TV channel lineup, additional Bash on Windows choices, and more. Read on for the latest in HTPC news and updates!

Pluto TV is an essential app for cord cutters. The streaming service announced more than 100 channels added to its lineup. As Bubbleblabber reports, it's a varied lineup including animation content as well as international offerings from the likes of Sky and Al Jazeera. Pluto TV does include a guide with information on what's available to stream. [Read: 20 best Kodi addons 2017: Movies, TV Shows, Live TV and More]

As an increasing number of cord cutters emerge, streaming services abound. Tech giant Facebook is reportedly poised to make the foray into the streaming spec. In June 2017, Facebook is slated to debut a series of TV-like shows. Differing from traditional television and streaming, these will clock in around 5-30 minutes. One of the confirmed shows is a virtual reality (VR) dating show.

After the Court of Appeals ruled in favor of Giganews, the RIAA and MPAA offered their support for Perfect 10. Thus, the MPAA and RIAA requested another hearing. According to them, this ruling contradicts current law by not ruling in favor of the copyright holder. It's an important ruling which could shape the future of filesharing court cases. Want to learn more about Usenet? Here's how to select the best Usenet provider. [Read: 5 Best Usenet Search providers for Sick Beard and CouchPotato]

Microsoft will offer 3 flavors of Linux in the Windows Store

Microsoft's partnership with Ubuntu for Bash on Windows was revolutionary. Further expanding its relationship with Linux, Microsoft announced its plans to include OpenSUSE and Fedora in its Bash for Windows offering. What this feature does is install a full Linux subsystem for Linux. Therefore, users may run Linux programs on Windows. This eschews a need for dual booting or virtual machines. [Read: Minimal desktop environment for Linux servers]

Notably, to install OpenSUSE or Fedora Bash for Windows still requires enabling Developer Mode. Additionally, these features are designed for command line access, not for desktop environments. So Bash on Windows is a fantastic tool for Linux server monitoring. [Read: 10 Best Linux Home Server Distros - Stability, Performance, Ease of Use]

When selecting a home theatre PC (HTPC), size matters. Especially when considering entertainment centers, many HTPCs come in compact form factors. ECS debuted a small form factor desktop in its x86 desktop. The ECS PB01CF is an ultra-compact desktop sporting an Apollo Lake CPU. While it's an Intel Celeron N3350 processor and a mobile system on a chip (SoC), the ECS PB01CF is a capable media center PC. With its Intel HD Graphics 500 integrated GPU (iGPU), the new ECS ultra compact PC offering is suitable for streaming. Outfitted with 2GB DDR4 and 32GB of eMMC storage, you won't win any benchmarking tests. But this is a fantastic device for streaming media. [Read: Cheap 4K HTPC build for Kodi, OpenELEC, and LibreELEC 2017]

While it's an Intel Celeron N3350 processor and a mobile system on a chip (SoC), the ECS PB01CF is a capable media center PC. With its Intel HD Graphics 500 integrated GPU (iGPU), the new ECS ultra compact PC offering is suitable for streaming. Outfitted with 2GB DDR4 and 32GB of eMMC storage, you won't win any benchmarking tests. Additionally, there's not much for local media storage. But with a microSD card slot and dual USB inputs, there's plenty of room for external storage. Notably, the 4K capable HDMI output makes this an excellent HTPC option for streaming needs. As an alternative, you may consider one of these 5 best legal Kodi streaming boxes for media streaming needs.