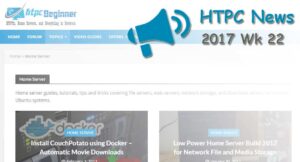 Welcome to the htpcBeginner HTPC News Roundup 2017 Wk 22! This week saw the release of LibreELEC v8.0.2 with an update to Kodi v17.3, the best game emulators for Nvidia Shield TV, and Kodi released as a snap app. Read on for the latest in HTPC news and updates!

Kodi, the popular media center, is now available as a snap app

Snaps on Ubuntu are universal Linux packages. These function on any devices and distributions (distros). As such, they're simple to install and create as well as safe to run. Massively popular open-source media center Kodi recently gained a snap app. Kodi team member DaVu allowed that with a rise in snap use, Kodi opted to debut its own snap app for Ubuntu. Installation is pretty simple with a mere few bash commands. [Read: Guide: Easy Kodi VPN Ubuntu setup with IPVanish]

What's important about this latest update is a growing trend of breakthrough features on Kodi. From adopting one of the latest installation methods in creating a snap app to forthcoming Kodi v18 features like Leanback suggestions, voice search and typing, as well as potential DRM compatibility, the Kodi development team proved its dedication to offering continual advancements. [Read: 10 Best Linux media center distros – Linux HTPC distros]

With streaming media, torrenting, and Usenet, the movie and television landscape drastically shifted. But as a report from Nielsen explains, 92.4 percent of video watching by US-based adults remains on TV screens. This may appear surprising considering the rise of cord cutters. But survey data reveals that 82.1 percent of the time Stateside adults consume content on a television. Plus, 10.3 percent of that time users reported watching video via streaming devices such as the Amazon Fire TV, Apple TV, or Nvidia Shield TV. [Read: WeTek Play 2 Android streaming box review: Streaming plus live TV]

Intel's Core i9 Extreme Edition CPU is an 18-core beast

Although the average consumer PC likely won't utilize the Intel X-Series i9 chips just yet, it's a taste as to what's available on the enthusiast market. Clocking in at just shy of $2,000, that's pretty hefty for a CPU alone. For under $500, it's possible to cobble together a more than competent HTPC and server build. Notably, the i9 should be perfect for transcoding though likely overkill for the average consumer build. [Read: Medium budget 4K HTPC build 2017 for Kodi, Plex, and gaming]

Copyright trolls appeared throughout Europe, not infiltrating Denmark. As TorrentFreak reports, 2015 saw over 6,000 purported BitTorrent pirates revealed via their IP addresses. But Internet search providers (ISPs) are not siding with copyright trolls. [Read: VPN vs DNS: Which one should you choose and why?]

Rather, ISPs including Telenor instead feel invested in protecting the legal security of the general public. It's refreshing to see ISPs standing up for the privacy of their subscribers. But this isn't the first instance of ISPs like Telenor defending subscribers and combating anti-piracy efforts. Telenor took similar action in Norway in April 2017. Additionally, ISP Telia joined Telenor in its fight against trolling.