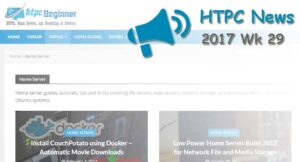 Welcome to the htpcBeginner HTPC News Roundup 2017 Wk 29. Game of Thrones pirates were targeted by HBO with the release of its latest season, pay TV continues to suffer, and Pandora ceases operations in Australia and New Zeland. Read on for the latest in HTPC news and updates!

Game of Thrones pirates being monitored by HBO, warnings on the way

Pirating content is risky. But for content backed by major companies, it's even riskier. Consider the Kodi illegal streaming addon takedown which was exacerbated by support for the Premier League. Game of Thrones ranks as one of the most popular current TV series. As such, it's pretty popular among pirates. In addition to the latest episode, many GoT pirates reeived letters from Internet service providers (ISPs). HBO sent letters to ISPs, and while ISPs aren't obliged to forward these on to perpetrators, many do.

As cord cutting rises with offerings from Sling TV, DirecTV Now, and PlayStation Vue, pay TV continues to suffer. As Market Watch uncovers, Q2 is typically a lull for media companies. Nevertheless, Q2 2017 has been particularly poor for pay TV companies. Evercore analyst Vijay Jayant speculates that Q2 2017 will see around 1.09 million subscribers lost in the pay TV space. This would be a record setting loss and the first quarter where pay TV will net a loss over one million. With services such as Plex, Emby, and Kodi, as well as streaming services like Netflix and Hulu, there's ample opportunity to cut the cord.

In a major move, music streaming service Pandora is leaving Australia and New Zeland. July 31, 2017, sees Pandora officially go under in the land down under. Premium users of Pandora will receive a refund for their subscription if their next billing date arrives after July 31. [Read: Setup Subsonic on Raspberry Pi 3 – Media streaming server]

However, as The Age notes, Spotify is the most popular music streaming service. Luckily, there are several alternatives such as Apple Music, Spotify, and Tidal. Of course, a VPN or DNS still grants access to services like Pandora from anywhere in the world. Or, why not create your own music streaming server using Madsonic or Subsonic? [Read: Setup Subsonic with Odroid C2 – Media streaming server]

What happened to Fling, Amazon's Chromecast clone on Fire TV?

In July 2015, Amazon announced a Chromecast-esque Fire TV feature. Dubbed Amazon Fling, it allowed phones and tablets to sling streaming content to nearby Amazon Fire TV devices. However, while a promising idea, it's since fizzled out. As TechHive reports, it's rare to find any apps which support Fling.

Casting is a major feature which appears pretty much standard in most apps and on almost any hardware. However, it's odd as TechHive comments that both developers and Amazon itself seem to have forgotten about Fling. You can sideload Kodi on the Fire TV Kodi in Fire TV using AGK Fire, sideloading apps on Fire TV with Downloader, adbLink for installing Kodi on Amazon Fire TV, the ES File Explorer method, and AppStarter.

Now, Canonical will focus on 17.10 for its short term release distro. While you can continue using Ubuntu 16.10, lack of future updates and critical security patches, and bug fixes means it's best to update. Usually, third-party developers with PPAs hit end of life for support on older releases as well. The best upgrade from 16.10 is to Ubuntu 17.04 the current LTS iteration. This is supported with current bug fixes and security updates.