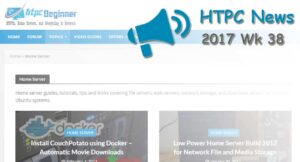 Welcome to the htpcBeginner HTPC News Roundup 2017 Wk 38. This week saw a drop in price on an Nvidia Shield TV bundle, an EU piracy report come to light, and news about TVAddons. Read on for the latest in HTPC news and updates!

Here at htpcBeginner, we don't condone piracy. But with the prevalence of pirate downloading and streaming, it's interesting to examine the dichotomy between piracy and legitimate sales. As Gizmodo reports, the European Union (EU) suppressed a whopping 300-page study which concluded that piracy, in fact, did not harm sales of copyrighted material. This included books, music, video games, and movies. However, the EU, despite spending around $428,000 USD didn't release its finding.

Perhaps that's because the study concluded that the impact of piracy failed to provide stats which suggested a “…displacement of sales by online copyright infringements.” Essentially, piracy does not harm legitimate sales. That's a major finding and seems counterintuitive. Even stranger, the report posited that illicit downloads may even bolster legal sales of games. The sole area where illegal downloading was found to have a negative impact was with blockbuster films.

There are tons of Linux distros for a variety of purposes, including Linux server operating systems and media center distros. Kali Linux is a specialized distro tailored to ethical hacking. For security-minded Linux users, it's totally worth trying. Especially if you run a home server. As Fossbyte reveals, Kali Linux 2017.2 is now available. It's got a ton of updates to package and new tools such as dbeaver, a GUI database manager, apt2 or automated penetration testing toolkit, and ssh-audit, an SSH server auditor. [Read: 8 best Linux media center software options – Linux media center 2017]

What's more, there are tons of use examples so that Kali Linux 2017.2 is great for seasoned users as well as new users. Anyone running a Linux server or who wants to maintain a secure home network and devices may consider using Kali Linux for penetration testing and ethical hacking. [Read: 8 best BitTorrent clients for Linux distros such as Ubuntu, Debian, and Fedora]

TVAddons: A law firm is not spying on our Kodi users

TVAddons once reigned supreme for third-party Kodi addons. TorrentFreak reveals that TVAddons benefitted from over 40 million unique users in March 2017. However, in June 2017 with the Kodi addon crackdown, news stories appeared which allowed that TVAddons was being sued and the site disappeared. Many users feared that a law firm was spying on TVAddons users, perpetuated by reports that the old TVAddons domain was given over to a Canadian law firm. But that's an important distinction: it's the old TVAddons domain. The law firm with that domain is actually a different one than the firm suing TVAddons, and moreover, TVAddons explains that:

So fear not, TVAddons users.

Look out Apple TV: A Roku 4K streaming stick may be coming

Apple announced its newest Apple TV iteration complete with 4K support. That's a major overhaul for the popular streaming device. Now, The Verge presents rumors of a 4K Roku streaming stick set to debut in Fall of 2017. This promises an affordable alternative to the Apple TV 4K. [Read: Chromecast vs Apple TV – Which is worth your money?]

DUbbed the 4K Roku Streaming Stick+, it's a stick form factor and will sport HDMI-CEC, voice control, and a new remote. It's clear that 4K is the future of streaming TV.

With 4K as the hottest evolution in the streaming space, Nvidia has dropped the price of its flagship streaming device the Nvidia Shield TV to $179. The Shield TV is hands down the top streaming device available with features like expandable USB storage, OTA DVR options, gaming and game streaming, plus you can even run a Plex server off of a Shield TV. Admittedly, it's a premium streaming device which caters to power users more than casual consumers. With its new pricing at $179 for the 16 GB variant, the Shield TV now clocks in around the same price as the Apple TV 4K. [Read: 5 Best Kodi skins for Nvidia Shield TV 2017 – Performance with looks]

Although, the cheaper version lacks the gamepad for gaming. Of course, you can always add your own third-party gamepad for the Shield TV. The 500 GB version retails for around $300, and it's well worth the price.