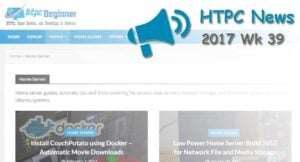 Welcome to the htpcBeginner HTPC News Roundup 2017 Wk 39. This week saw a Plex news feature, best legal anime Kodi addons, and more. Read on for the latest in HTPC news and updates!

As cord-cutting continues to thrive, pay-TV is on the decline. As Variety reports, losses in the pay-TV sector could rise to as high as 5 million U.S. households. For 2016, the space witnessed a dip of 2 million subscribers.

It's easier to dump cable with streaming services such as DirecTV Now, Sling TV, and PlayStation Vue. Plus, over-the-air (OTA) content delivery makes cord-cutting even easier. Then free, legal streaming addons for the likes of broadcast TV further posit cord cutting as a feasible venture.

How to watch NFL games on Nvidia Shield TV

The Nvidia Shield TV is arguably the best streaming device available. It's a solid device for gaming, can act as a Plex client and server, as well as boasts a massive library of 4K video content. For sports fans, there are several ways to watch NFL games live whether it's with Kodi, online, or via other means. Nvidia details the various means through which viewers may watch NFL games via the Shield TV. These include paid services such as PS Vue and FuboTV, an OTA antenna coupled with a Tablo USB tuner addon, and more. [Read: 5 different ways to watch ESPN live on any device using Kodi, OTT services, more]

All the news that's fit to Plex

Plex, one of the best media server software options, keeps improving. In 2017, Plex introduced a Live TV and DVR feature, virtual reality compatibility, and more. Now, after acquiring Watchup, Plex offers a News section. This allows Plex users to stream, for free, news content from a variety of sources including CNET and The Blaze. It's another element to Plex which makes it the ideal tool for cord cutters and media buffs.

There's been a lot of talk about Kodi and legality. The software itself is completely and totally legitimate, although some third-party addons may present pirate streams. Though there are plenty of legal Kodi boxes, a crackdown focused on "fully loaded" Kodi boxes which came pre-loaded with illicit streaming addons.

TV Addons returned and is championing the addon space. In a recent piece, TV Addons explored various misconceptions about Kodi which have been perpetuated by British tabloids. These include scare tactics ranging from assertions of prison time to suggestions that Kodi boxes may be fire hazards. While we here at htpcBeginner are big Kodi fans, we encourage our readers to only use legal Kodi addons. Moreover, regardless of what you're doing online, we recommend picking a VPN or DNS.

What could have been a historic case trickled off into oblivion. Brian "Tomo" Thompson was arrested for selling "Fully loaded" Kodi boxes. Initially, he plead not guilty to offenses of advertising and selling devices created for the goal os streaming illicit content. Now, Tomo pleads guilty to both counts.