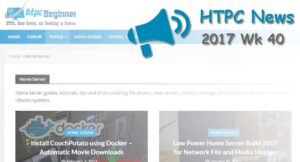 Welcome to the htpcBeginner HTPC News Roundup 2017 Wk 40. This week saw adaptive streaming from Plex, new Roku devices, and more. Read on for the latest in HTPC news and updates!

Plex makes its adaptive streaming tech available to all

Once again, Plex makes its streaming service even better. Among the superb features Plex rolled out recently, there's been VR support, a Plex for Kodi addon, live TV and DVR, plus streaming news. Now, Plex introduces its adaptive streaming tech for everyone. This greatly enhances the streaming experience, and makes it even easier to stream and maintain visible quality.

The war against pirate streaming continues, more specifically with a focus on the so-called "fully loaded Kodi boxes." Remember, Kodi itself is perfectly legal and there are tons of legitimate Kodi boxes available. Big TV may be losing subscribers to the likes of over-the-air TV and streaming services. However, these companies contnue to persist. This new set of lawsuits which targets Kodi software, as Motherboard Vice puts it, stretches the defintion of piracy.

Among the top streaming devices around, Roku makes some of the best. WIth the release of its Streaming Stick+ and an array of new hardware, Roku further takes hold of the streaming space. In fact, you're better off getting a Roku than a smart TV. These new devices are up to 5x as powerful as previous generation Roku hardware. That's a major plus for the new gadgets.

There's no shortage of streaming services, from PlayStation Vue, DirecTV Now, and Sling TV to Hulu and Funimation. But Netflix remains the top streaming service around. Although it may not have been the first of its kind, it certainly is the one which set the standard. As Business Insider reveals, Netflix rose to prominense as the leader of the pack. This is a trend which is set to continue, and moreover spans the globe.

Microsoft is finally shutting down its Groove Music streaming service

Goodnight, sweet prince. Microsoft has announced that its streaming servie, Groove Music, is shutting down. Although music streaming services such as Spotify and Pandora are inceaingly popular, Groove Music simply didn't take off. However, there are plenty of alternatives including do-it-yourself (DIY) music server options.