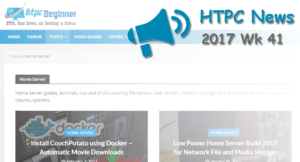 Welcome to the htpcBeginner HTPC News Roundup 2017 Wk 41. This week saw a new Fire TV device, Kodi admonishing pirate streaming on Twitter, and Plex live TV and DVR on Roku devices. Read on for the latest in HTPC news and updates!

e-commerce and tech giant Amazon now offers the Fire TV box. It's a streaming dongle which is a rapid departure from the previous generation Fire TV. Amazon's latest streaming device is engineered for ultra-HD and even looks different. This uses an HDMI port and is a square with a strap on it. What's excellent for cord cutters is that this device is available in a package with an antenna.

The Kodi landscape radically shifted. In recent months, there have been fines, bans, and addons going offline. Kodi maintains its neutral stance as developers, not the police. But on social media, Kodi keeps up its practice of warning against piracy. As Express reports, Kodi on Twitter seems to be telling users off for pirate streams. Thankfully, there are tons of legal Kodi addons for streaming and broadcast TV access.

Movies Anywhere is the Voltron of streaming services

Streaming services are on the rise including PS Vue, DirecTV Now, and Sling TV. A new service, Movies Anywhere, is an all-in-one which unites loads of streaming platforms. Using this site or app, you can connect and watch movies from all of those services. This is an awesome way to peruse your whole collection in a central hub. It reminds me of the concept behind Stremio. This service is really neat and solves a big pain point in the streaming space. [Read: Guide: How to install Stremio on Linux, Windows, and Mac]

Pirate Bay is mining cryptocurrency again, no opt out

Sorry torrent fans, The Pirate Bay is mining cryptocurrency and there's no opt out. But if you're not willing to pay for content, or pay to help TPB host servers, the least you can do is sacrifice a few system resources while you're onsite. Luckily, there are plenty of other torrent sites for use in 2017. Additionally, Linux users should check out the top Linux torrent client options. [Read: Best private torrenting sites 2017: Top private torrent sites]

Plex continues to debut awesome features. Now, its live TV and DVR services come to the Roku. This is a major win for the Roku, and further helps cord cutters to migrate to streaming plus over-the-air television.

Which amazon echo should I buy: Amazon Echo vs Dot vs Plus vs Spot vs Show