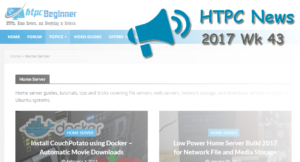 Welcome to the htpcBeginner HTPC News Roundup 2017 Wk 43. This week saw Original Xbox backward compatibility hit the Xbox One, Kodi v 17.5, and more. Read on for the latest in HTPC news and updates!

It's been around a while, so it's no surprise that The Pirate Bay is one of the best torrent sites for 2017. Although it's not a private torrent site, TPB is still a solid choice even in spite of cryptocurrency mining with user system resources. But as Torrent Freak reports, The Pirate Bay is difficult to find with Google in some countries. According to research, the UK featured tough access to TPB. Whereas using a VPN or DNS to mask an IP and make it seem like traffic was coming from a different country yielded differing results.

In the Netherlands for instance, The Pirate Bay appears as a first result. It's interesting, albeit frightening and slightly Orwellian, to see such search result-shaping. While this is supposedly to limit piracy, its applicability to other areas is not out of the realm of possibilities.

An Xbox One or PlayStation 4 offers the best Plex client experience for gamers.

The Xbox One is one of the best Plex client devices available. Microsoft's gaming console just got even better with its increased backwards compatibility. Backward compatibility for the Xbox One debuted in 2015 with support for Xbox 360 titles. Now, the Xbox One is able to play select Original Xbox games, either from disc or via (paid) downloads. This really makes it a console worth considering. [Read: How to install Plex on Xbox One – Use your Xbox One as a Plex client]

Kodi 17.5 update is now available to download, here's what is new

Over here at htpcBeginner, we're big fans of Kodi. But we only condone using legal Kodi addons. The latest iteration of the Kodi media center software, Kodi 17.5, is out. Largely, it's filled with fixes and minor tweaks. It's Apple users that will see the biggest changes. Now, with Kodi v 17.5, there's support for Retina Displays. [Read: 10 Best legal Kodi streaming boxes – Best Kodi box 2017]

Amazon is the third largest company in on-demand streaming music

Streaming has taken hold of the media industry, whether through legal means like Netflix and Hulu, or with illicit streaming sites. It's not just video content that's being streamed. Rather, music streaming is a major industry as well. Forbes reveals that eCommerce and tech giant Amazon is the third largest company in on-demand music streaming. Undoubtedly, its smart speakers are one prominent selling point in adopting Amazon music streaming. Alternatively, try creating your own music streaming service with server software.

The illegal streaming crackdown continues. In the UK, the High Court ruled that a British man is responsible for a whopping 16,000 pounds in legal costs after illegally streaming Sky Sports. PSA: Don't stream illegally.

Best PC for gaming and HTPC use 2017: Pre-built and DIY options