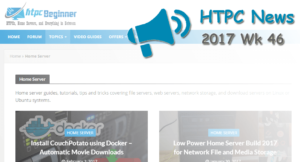 Welcome to the htpcBeginner HTPC News Roundup 2017 Wk 46. This week saw Hollywood strike back at illicit Kodi streaming addons, Plex gain Google Assistant, and more. Read on for the latest in HTPC news and updates!

Kodi has a storied history, although through no fault of the massively popular open-source media center. Rather, certain third-party addons offer pirated content. As Engadget reports, Hollywood has hit back, and this could be the last hurrah for addons such as Covenant, urlresolver, and metahandler. Thankfully, there's no shortage of legal Kodi addons for streaming TV, watching movies, viewing anime, perusing broadcast TV, and more. [Read: 10 best legal Kodi streaming boxes – Best Kodi box 2017]

Streaming services are all the rage. This includes offerings such as Sling TV, PS Vue, DirecTV Now, and more. The latest site for cord cutters may be…the library? Yep, you heard that right. Kanopy and Hoopla Digital are streaming services available to libraries across the United States. These boast ad-free movies, shows, and documentaries. It's a neat premise, and really makes cutting the cord more affordable and feasible.

Plex ranks among our favorite media server software options here at htpcBeginner. The latest update brings Google Assistant support to the Android TV version of Plex. As such, you can use Google Assistant for voice searching your library, skipping items, and more. This update truly unites the home theatre PC and smart home spaces. [Read: How to use Plex VR in Daydream: Watch Plex in VR using Daydream]

Looking for a sweet HTPC-server combo? The Modulus 4K is a neat device. The top of the line M1 rocks a 12 TB harddrive and supports 4K with HDR10 out of the box. There's an HDMI input and SPDIF optical input, as well as optical out, two HDMI outpits, and an RF input. It runs about $3K however. There's also the Mx1 mini client for just shy of $500. This is a small box for casting services from the M1 to remote displays.

Additionally, there's a Blu-Ray ripper for ripping physical discs, and even support for DVR with OTA tuners and cable cards. Plus, there's a bundled service similar to PlayOn which allows users to not only play back the likes of Hulu and Netflix, but also record from them. Note that legality of this is, questionable.

Make your Recalbox shine with Hyperion

Recalbox is similar to RetroPie in that it's a retro gaming operating system for the Raspberry Pi. The awesome gaming OS continues to improve, now adding Hyperion support. This allows users to sync ambilight clones with their Pi devices. Moreover, this isn't just compatible with video content. Instead, it's capable of changing lights based on games as well. It's a major update for the awesome gaming operating system, truly making it a consideration for your HTPC needs. [Read: Recalbox vs Retropie: Which retro gaming OS should you use?]