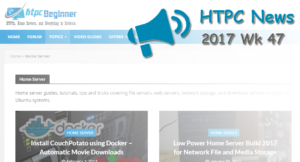 Welcome to the htpcBeginner HTPC News Roundup 2017 Wk 47. This week saw Kodi v18 features, Black Friday VPN and OSMC deals, and more. Read on for the latest in HTPC news and updates!

Kodi v18 is poised to release. With it comes a slew of enhancements, including Android leanback suggestions, as well as voice search and typing. It's interesting to see how Kodi will integrate into operating systems it runs on such as Android TV. Though v18 is in development, it's available to download at the moment.

Torrent fans, beware. Google and a smattering Russian search engines purges 786 pirate websites from search results. As TorrentFreak reports, these search engines removed entire domains. It's a rather controversial act, even if those domains are pirate sites. However, 2017 is ripe with excellent torrent sties, and private torrent websites.

Tivo wins one of its patent fights with Comcast

Comcast and Tivo were entangled in a patent battle. Recently, the International Trade Commission (ITC) ruled that the COmcast X1 set-top box violated two Tivo patents. This is a huge win for Tivo, and a major loss for Comcast. With more cable cutting and on-demand watching, Tivo has declined. As such, much of its profit derives from licensing and accordingly winning this patent war affords more profit to Tivo.

Netflix and chill, Netflix and...work? Yep, that's right, Netflix is binged all the time. And not merely at home in sweatpants. As data from Quartz reveals, 26% of survey respondents admitted to binge watching Netflix at work. 7% replied that they have watched Netflix in a public restroom. We here at htpcBeginner do not judge. The trend is clear: streaming services such as DirecTV Now, PS Vue, and Sling TV make streaming all the more feasible for end users.

Bad news for Stateside folks: FCC Chairman Pai revealed that he will reverse the Obama administrations' regulations. So what does that mean? Well, primarily, and unfortunately, net neutrality rules are poised to be revoked. Essentially, this transforms the Internet into the wild wild west.

Vero 4K will be discounted to £99 on Black Friday: Vero 4k on sale