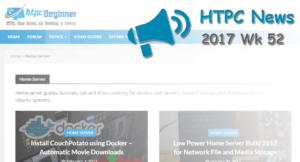 Welcome to the htpcBeginner HTPC News Roundup 2017 Wk 52. This week saw a Kodi come to the Xbox One, the Orange Pi boast its Android compatibility, and a slew of changes to the Netflix January 2018 lineup. Read on for the latest in HTPC news and updates!

Kodi for Xbox One

While it's now more common to find Kodi on devices like the Raspberry Pi or Vero 4K, Kodi originally launched as XBMC, or Xbox Media Center. Now, Kodi returns to its roots with an Xbox One app available in the Xbox app store. Additionally, there's now a 64-bit version of Kodi for Windows. These mark significant advancements for the Kodi platform which nears its Kod v18 launch. [Read: 6 Best legal Kodi TV show addons 2017 - TV show addons for Kodi]

Orange Pi One Plus single board computer with Android is here, Linux images are coming

Raspberry Pi devices are nifty single board PCs. Perfect for running media center operating systems, or use as a retro gaming console with Recalbox or RetroPie, they're awesome, utilitarian devices. But there are several competitor devices. The Orange Pi One Plus can run Android, and soon will boast Linux images. This is a fantastic option for makers and tech enthusiasts. Because it runs Android, this is a great board to snag in addition to a Raspberry Pi. [Read: Icecast Ices2 music server for Raspberry Pi: Raspberry Pi streaming audio server]

'Game of Thrones' most torrented TV show of 2017

"Game of Thrones" isn't merely one of the most popular TV shows. It's also one of the most pirated shows for 2017. Despite a crackdown on pirated content, torrenting or Usenet downloading remain top choices for home theatre PC enthusiasts (note: we here at htpcBeginner do not condone piracy). [Read: Best torrent websites 2017 - Torrenting sites 2017]

Cord cutters likely to have even more streaming choices in 2018

It's an excellent time to be alive for cord cutters. As USA Today reports, cord cutters have plenty of options to shed the shackles of traditional pay TV. From Sling, DirecTV Now, and PS Vue to Hulu TV and YouTube TV, there are tons of choices. Additionally, there's a lot of content freely available over-the-air with an OTA antenna.

While there are loads of streaming services, Netflix is one of the most popular. Each month, there's a shifting lineup of content available on Netflix. For January 2018, a slew of "Batman" movies, the "Lethal Weapon" series, and the "Godfather" trilogy come to Netflix. Prepare to lose a few classics, including "E.T." and "Gremlins." Check out the full change log, and get to prioritizing your binges.