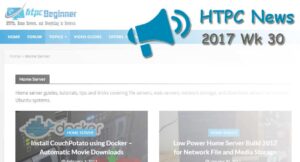 Welcome to the htpcBeginner HTPC News Roundup 2017 Wk 30! This week saw Gigabyte announce a Raspberry Pi rival, TVAddon vunerabilities, and Roku leading the streaming pack. Read on for the latest in HTPC news and updates!

In case you missed them, here is a recap of all our interesting articles published last week!

The Raspberry Pi is an awesome and useful device. This single-board PC is excellent for a gaming console running RetroPie or Recalbox. It's capable as a Plex client device or Plex server. You can lightweight Kodi operating systems and even make a personal cloud. The possibilities are endless. Motherboard manufacturer Gigabyte unveiled its single-board PC, the GA-SBCAP3350. This awesome device boasts an Intel Celeron N3350 clocked at 1.6 GHz. While it's similarly specced to a Raspberry Pi, the GA-SBCAP3350 features upgradeable RAM and storage. That's a huge feature, and Gigabyte is poised to revolutionize the single-board space. [Read: How to install XBian on Raspberry Pi 3 - Lightweight Kodi OS]

It was inevitable since the massive popularity surge of so-called "Kodi boxes." Again, Kodi itself is perfectly legal. Moreover, there are plenty of legal Kodi boxes. But many third-party addons for Kodi allow for illicitly streamed content. Recently, details emerged which revealed potential privacy issues stemming from illegal addons from TVAddons. Nathan Betzen, Kodi Product Manager, warned that anyone still ysing Kodi addons with TVAddon updates could receive unwanted attention. In my opinion, the Kodi crackdown has actually been beneficial. Pirate streams were pretty finicky, and moreover quality wasn't great. In cutting back on those, we'll witness an increase in addon quality, and hopefully additional addons providing legal content. [Read: 6 must-have legal Kodi addons for broadcast TV streaming]

Home theatre PCs (HTPCs) are awesome, and it's simple to cobble together a do-it-yourself (DIY) rig. SilverStone debuted its Raven RVZ03. This model boasts RGB. The RVZ03 arrives as the latest model in the RVZ lineup. It's a small form factor (SFF) case and sports RGB lighting. While this doesn't exactly add any functionality, it's an industry trend. Plus, it will spice up your HTPC. [Read: Best HTPC for Kodi with 4K on a medium budget 2017]

As cord cutting rises, so too does streaming. Surprisingly, eMarketer discovered that Roku trounces Amazon, Google, and Apple with its streaming user base. The tech company beats out juggernauts like Google and Apple with its whopping 38 million streaming device users for 2017. But as CNET reveals, the number of smart TV users is set to dominate that large number, clocking in at 81.2 million. Even game console streamers slide in around 62.8 million. Roku further expands its stellar streaming landscape with apps like BBC America, and a newly launched DirecTV Now app. Regardless of device, it's clear that streaming is the future of the HTPC space, legal or pirate. Services such as DirecTV Now, Sling TV, and PlayStation Vue make obtaining premium content sans cable or satellite incredibly easy. [Read: Roku 4 preview: Bigger, faster Roku device for your HTPC]

How to setup VNC server on Ubuntu for remote desktop access