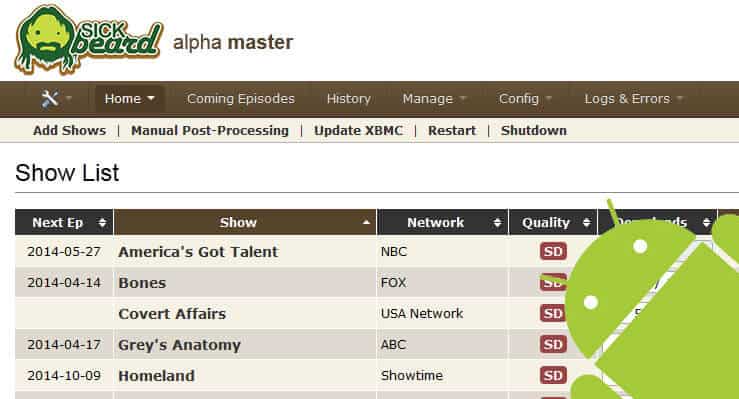 My tests were done on a Nexus 10 running Android KitKat 4.4.3 but this should work on devices running recent versions of Android. Most smartphones, tablets, Android TV sticks, Android streaming boxes, and even Amazon Fire TV should be able to run SickBeard without any issues. [Read: SickBeard alternative: NzbDrone vs SickBeard] 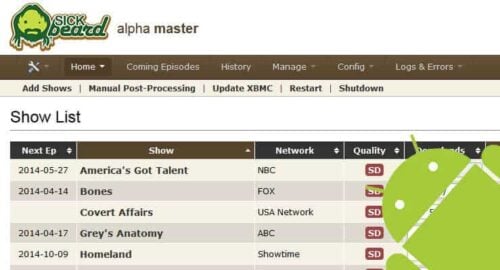 For SickBeard Android installation, all you have to do is to head over to the Google Play store and download SickBeard on Android app.

After you install Sick Beard on Android, starting it is just a matter of scrolling through your apps and opening the SickBeard app.

Sick Beard is now running on your device (unless you encounter any errors). SickBeard default port is 8081. You can either open SickBeard web interface using the button on in the Sick Beard app (shown above) or going directly to its webui at http://localhost:8081. [Read: Install NzbDrone on Ubuntu in a few simple steps]

If you want to access your SickBeard on Android device from other systems or devices on your internal network you can use its network IP address (see example below):

After you install SickBeard on Android, follow my other post to learn how to use Sick Beard and configure it. It explains all the settings in detail with screenshots. After configuring your Sick Beard, you may return to this post and continue. [Read: 5 Must have Android apps for HTPC or Home Server control]

In order to make Sick Beard function properly, you will have to install and configure newsgrabbers. On Windows and Ubuntu, we have shown how to install and configure SABnzbd+ to properly automate downloading TV Shows. SABnzbd+ does on run on Android, but you may use apps such as Nzb Leech or NZBGet Mobile as Usenet downloaders. As mentioned earlier, you also require a reliable Usenet account. You may get a free Usenet account as described in this post, or go with a reliable Usenet service from Astraweb or Newshosting.

Sick Beard should automatically download and organize your favorite TV shows in the folders that you want. Now the only thing you need is an awesome media player. While there are tons of players available, nothing comes close to the free VLC, or even better XBMC. So go ahead what are you waiting for, install Sick Beard on Android and convert your Android device to a mini media center.