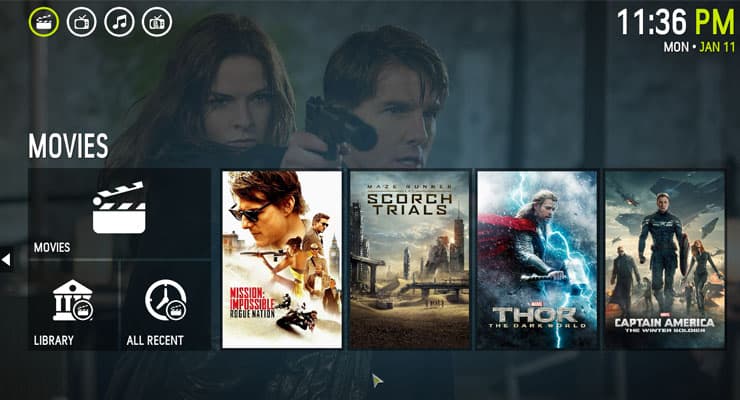 Sometimes you just want to get away from cluttered interfaces, specially with your Kodi HTPC. Maybe you want a cleaner looking screen, with fewer elements and easier to use. If you have tried the 6 best skins for Kodi we talked about some time ago, and you have tested the 10 best skins for touchscreens we recommended previously, yet still can't find a suitable plugin for your Kodi interface, then this might interest you. The Kodi BOX skin takes on minimalistic square elements and vibrant colors to make your interface step up to the next level; a level where you can find your media with fewer clicks, and customize several details to your liking. [Read: Kodi Maximinimalism Skin Review: a skin to keep it simple]

In this BOX skin review, we see an interface with stylized icons, big menu elements, and also big empty spaces, harmonized in such a way that they actually don't feel artificial nor forced. The BOX Kodi theme presents several visualizations you can use, although they are fewer than the ones present on interface plugins such as the Kodi Aeon Nox skin or the Kodi Metropolis Skin. These visualizations on the Kodi BOX skin get the job done and allow for enough variety on your browsing that you might use this skin for a fair amount of time. The BOX Kodi theme supports mouse usage, so it's ideal to browse your media with a wireless HTPC keyboard. In this BOX skin review, we saw that this interface addon was released on the Kodi Skin Forum, on the thread about the Kodi BOX skin plugin, and is still actively supported. We also noticed that it doesn't offer touch support, so it wouldn't make a good candidate to the best Kodi skin for phone or similar devices.

The best way to visualize menus with the Kodi BOX skin is the thumbnails visualization. The BOX Kodi theme brings out several rectangles with a visual depiction of what you're about to select. However, it needs special mention, because unlike other skins, the Kodi BOX skin uses rectangles confined to a rectangular area in the middle of the screen, and you actually scroll within that area, leaving empty spaces above and below. Scrolling with Kodi BOX skin is smooth and even snappy at all times, so the empty space makes this skin easier to render on low spec devices. [Read: 5 Best XBMC skins for Raspberry Pi]

Other visualizations are readily available when browsing media, with most of them keeping the empty space above and below, as well as a restricted scrolling area. This is a clever way in which the Kodi BOX skin reduces clutter, although it will play against you if you're someone who prefers a wall icon visualization to look at many movie or TV show options at once. You can appreciate more visualizations from the Kodi BOX skin below:

It is also possible to customize the main menu screen, and add widgets to the right. In this example, I customized a whole new menu tab, with the most used addons as shortcuts, and also a widget for the video addons installed on the system. As you can see, this adds up a whole new level of convenience to your Kodi interface, and could very well make the Kodi BOX skin the best KODI theme in terms of customization. You can appreciate the example below.

Do you recommend the Kodi BOX skin?

This skin is certainly a change from the ones we're used to, and could bring an interesting variation to your Kodi HTPC. It is also available from the official XBMC/Kodi addon repository, which is also a good Kodi skins repository, so if you decide to try the Kodi BOX skin, it's only a few clicks away from you. This is a colorful yet simple skin, with a good element distribution across all menus and visualizations and even a fully functional seeking bar during playback, as well as a playback menu with buttons for the most common tasks. You can modify many Kodi video options or Kodi audio options from playback, as well as performing other tasks like download Kodi subtitles for movies, so be sure to check the Kodi BOX skin today.