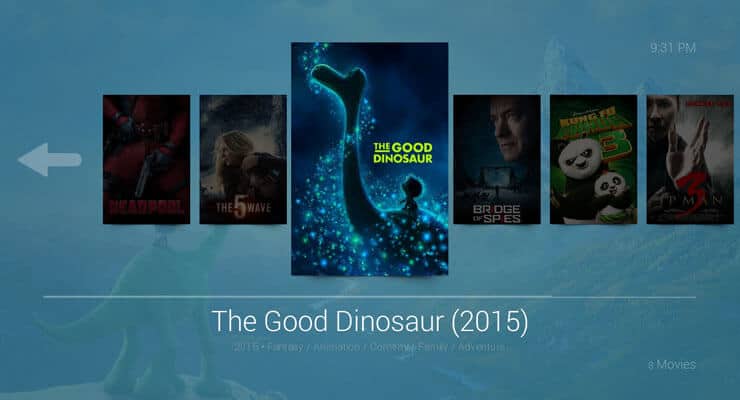 Choosing the right interface for your limited hardware device is always a difficult task. The few resources on hardware like the Raspberry Pi or similar devices like the Banana Pi Pro make it a priority to get rid of animations, transition effects and other things that might be taxing to your system while rendering the screen. If you want to see skins appropriate for these devices, you can read our best skins for Raspberry Pi post, where you can find 5 examples of lightweight interface plugins for Kodi. However, I had not seen a lighter skin, with so few elements than the Kodi Conq Skin, which is the one we will review today. [Read: 6 Raspberry Pi Kodi addons to take your Pi to the next level]

What makes the Kodi Conq skin so appropriate for low-end devices, instead of other themes for Kodi we might install? Well, the Kodi Conq skin seems to be only text-based at first. You can add widgets, such as weather forecast or video addons, which incidentally, bumps up the usability and functionality of the Kodi Conq theme, without actually pushing the technical capabilities of your system. This means, basically, that you can browse addons without having to enter a specific menu, which is amazing, and is possible without taking up a lot of resources. This feature goes well with movie addons such as the Kodi Velocity addon, or one of our 10 best movie addons for Kodi. Set your favorite addons as favorites, or simply list them all, and have a go at streaming with few keypresses. You will need a remote such as the Logitech Harmony Smart, or a wireless HTPC keyboard, since this skin does not offer mouse support.

For me, the Conq Skin plugin for Kodi was a shocking sight, because there are just so few elements on screen, that I had a hard time at first figuring out how it worked. The menus in the Conq skin for Kodi are simple, and consist almost entirely of text, which you can tweak, changing the font and even its color and background color. It does not have nearly as many visualizations as the Kodi Aeon Nox skin or the Kodi Metropolis skin, though. In fact, for menus you get only one visualization, a list based menu, and for movies and TV shows you get that one, and another one with movie covers. You can see the limited Kodi Conq skin visualizations with some tweaks below:

Kodi Conq Skin: do you recommend it?

If you are a fan of having several visualizations at your disposal and tweaking the way your HTPC interface looks, you might be better off with skins such as the Nebula Kodi Skin or any of the skins in our list with the 10 best skins for touchscreens. However, if you are the owner of a limited hardware device, and want a skin interface that gets the job done without lagging you, I cannot think of a skin more appropriate for the task than the Kodi Conq Skin. If this is your case, give it a try, install it and tweak it. Despite its simplicity, it still has many things to offer, like smooth transitions and comfortable add-on integration. And besides that, it's free!