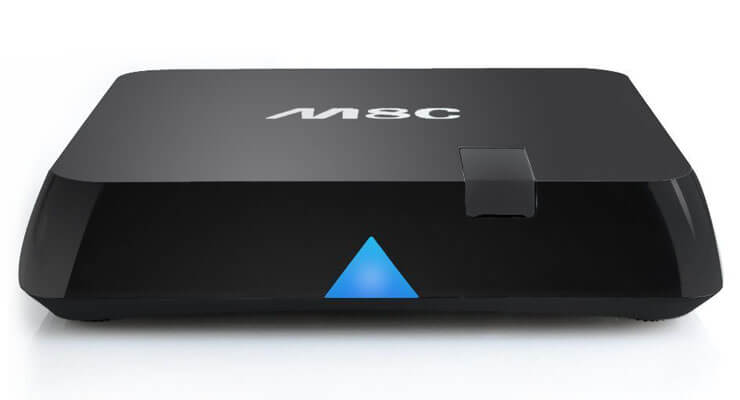 For less than 100 bucks you can put your hands on the M8C Android box; price tag that sets it among the likes of the cheapest Android TV boxes on the market. This device offers a good price-quality ratio, thanks to its Quad-Core processor capable of running Kodi for Android and supporting 1080p media. While writing this M8C Android TV box review, we were very surprised by a small detail that might be overlooked by the untrained -and trained- eye: this device includes a webcam. Why could you possibly want a webcam in your HTPC box? [Read: NVIDIA SHIELD TV: An amazing option for your media center]

Well, Android players are neat and all, but we must not forget that they are, above all else, computers. Android supports video chat experiences such as the one provided by Skype for Android, and other similar apps. So when you get word of an Android media player which also includes a 5-megapixel webcam, as the M8C Android box does, the options to use this device increase. Is this enough of a good selling point for the M8C Android box? Let's find out.

Performance wise, the M8C Android TV player compares to similar Android boxes such as the Tronfy MXQ, although it is possible to get some delays or stuttering, but nothing major. During our M8C review, we found out this player comes with Android 4.4 right out of the box, and an older version of XBMC/Kodi installed, though it is entirely possible to upgrade to the latest version of Kodi via the Google Play Store. There is an included remote that isn't really remarkable, but gets the job done, albeit at a short range and with IR technology, which might have you pointing at your device and having to get closer to it. If you decide to get this device, you might want to use a wireless HTPC keyboard with it, or a remote app such as Yatse for Android, since it will give you a better experience when browsing your media. [Read: Review: Logitech K830 Wireless Backlit HTPC Keyboard with TouchPad]

The included camera is a nice plus; however, it produces a dark and low quality image, which is fine for video chatting but not for any other purposes, such as recording video. A nice detail about this camera that we found out about on our M8C review is that you can flip it up whenever you want to use it, and close it back down when you are not sending video. In this way, you can protect it from accidental blows, as well as protecting your privacy, in case a webcam on your living room gets you a little bit paranoid.

Would you recommend buying the M8C Android box?

It's always a nice thing to see devices that are done with innovation in mind, such as the one we analyzed on this M8C Review. They may create situations or uses that we didn't know were possible, such as perhaps in the future watching a movie with someone who is far away, by being connected via chat and sharing facial expressions and comments, for a more complete communication experience. However, as promising as that sounds, I would say this device is still long ways away to offer that kind of usability. It is a decent media player, has a remote included and a nice extra in the form of a webcam, so if you're planning to get an Android media player, check out this option; however, I am almost certain it will not make it to the top of your list.