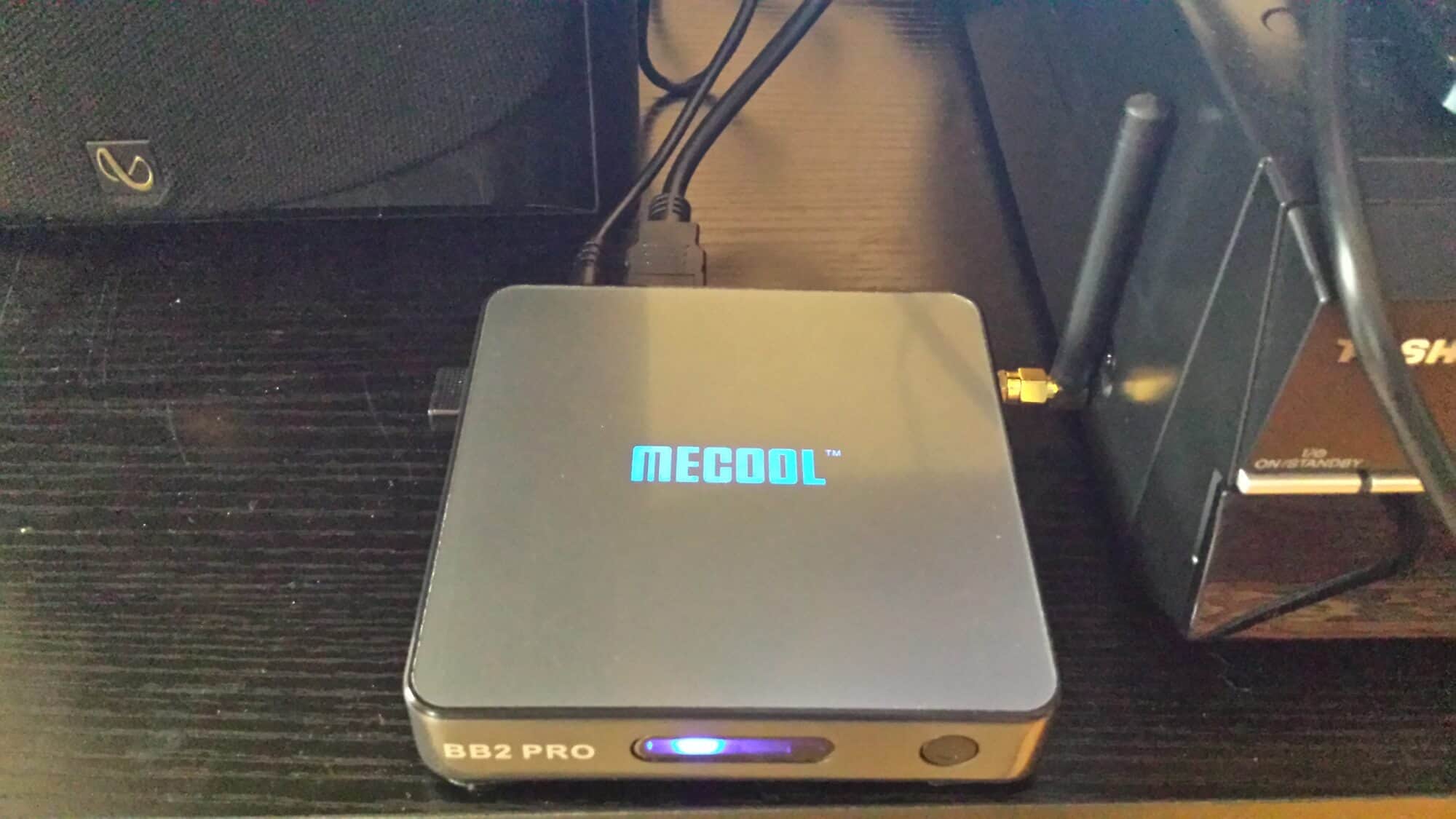 Unboxing the Mecool BB2 Pro Android media player, I was pleasantly surprised at its bundled accessories. The device and power supply come standard. Plus, there's an infrared (IR) remote. By opting for IR rather than Bluetooth, the Mecool BB2 Pro TV box remote delivers functionality with most television sets. The power supply includes two plugs: a 2 prong type A as seen in the USA, Canada, Mexico, and Japan, as well as a type C Europlug. Additionally, I was pleased to find an HDMI cable in the box.

On the sides, you'll find two USB ports and a microSF card slot. In back, there's an optical audio output, HDMI port, DC input, and Ethernet port. An antenna screws onto the side for Wi-Fi. The Mecool BB2 Pro TV box maintains both 2.4G and 5G ac Wi-Fi.  At the front, there's an IR port which is compatible with the bundled remote. You should be able to control the Mecool BB2 Pro Android streaming media player with IR universal remotes. However, I did not test this functionality. The Mecool BB2 Pro TV box carries a small footprint. It's larger than my Roku 2XS Angry Birds Edition. But it's smaller than my Nvidia Shield TV. [Read: Quick Nvidia Shield TV 2 Review: re-design worth looking at]

Unlike many Android streaming media players, the Mecool BB2 Pro TV box runs Android 6.0 Marshmallow. While Android-based devices such as the Nvidia Shield TV also run Android OS, many of these utilize Android TV. Although many apps function properly on Android TV, certain apps won't install on the Android TV operating system. Whereas the Funimation app, for example, runs magnificently on my SamgungGalaxy S4 phone and Galaxy Note 10.1 2014 Edition, it's incompatible on my Nvidia Shield TV. This was a limitation I was fully aware of going in.

Kodi ranks among the best open-source media players available. Because Kodi is cross-platform, many Android streaming media players offer an ideal environment for Kodi. Browsing the list of default BB2 Pro apps, you'll notice the generically-named "TV Center." Opening this up, you'll be prompted to install the app. Once it's loaded, TV Center is a skinned and pre-configured version of Kodi. You'll find many of the best Kodi addons for movies, as well as Kodi addons for TV shows pre-loaded. For instance, Phoenix and Genesis come pre-installed. [Read: 5 Best Legal Kodi Streaming Boxes - Best Kodi Box 2017]

The TV Center on the Mecool BB2 Pro TV box is a wonderful inclusion. I was able to forgo much of the initial Kodi set up. Rather than searching for Kodi, and then individually installing apps, I simply launched the TV Center and Kodi with its addons was ready to go. [Read: 20 Best Kodi addons 2017: Movies, TV Shows, Live TV and more]

There's a lot to like about the Mecool BB2 Pro streaming media player. The user interface (UI) is simple and intuitive. I appreciated the smattering of default apps. While it's not incredibly comprehensive, the BB2 Pro isn't laden down with bloatware. The hardware itself is quite capable. According to the packaging, the BB2 Pro can handle 4K ad 60Hz. I was unable to test this as I don't have a 4K TV, but I threw my largest H.264 and H.265 files at the Mecool and they played perfectly. I failed to find a file the BB2 Pro couldn't handle.

For further testing, I installed Plex. My server is a low power build with a Xeon CPU. It's more than able to tackle four simultaneous 1080p Plex transcodes. Therefore, any performance issues I encounter with Plex are typically client-related. I streamed several of my largest, and highest quality files over Plex. The Mecool BB2 Pro delivered performance on par with my Nvidia Shield TV. [Read: 5 Best Plex Client Devices 2017: Plex TV Boxes to Stream from Server]

Mecool BB2 Pro Android TV Box - What I Didn't Like

Unfortunately, the Mecool BB2 Pro TV box isn't perfect. Certain aspects of its strengths double as weaknesses. The included remote is fine for most functions. But the default Android operating system is catered to touchscreen devices. As a result, occasionally navigation is incredibly difficult. I was unable to play anything from Netflix using the bundled remote. Because of its keyboard, I'd planned to use my Rii i8+ Mini keyboard instead. This worked flawlessly. But it's still an inconvenience that the standard remote won't allow full navigation.

Similarly, the non-Android TV OS is a double edged sword. While there's broader app compatibility, a few apps displayed oddly. Funimation cut off the bottom of the screen while attempting to browse my queue. However, when playing videos, the full screen appeared as it should. Most of the other apps I tried including HBO GO, Showtime Anytime, Epix, Netflix, and The CW worked well. Of course, most of these didn't function with the default remote.

While the IR port is an awesome feature which allows for use with universal remotes, the front IR port emanates a blue light. When off, it's red. The blue light is brilliantly bright, and distractingly so. In a moderately to well-lit room, it's not that noticeable. But in a dark room, the glowing blue light on the front of the Mecool BB2 Pro Android media player is overpowering.

Ultimately, the Mecool BB2 Pro Android streaming media player is an awesome Amlogic device. I'm impressed by its performance and like the small stature which easily fits in a media center. IR and Bluetooth ensure compatibility with a bevy of accessories. While navigation can be challenging with its default remote, I appreciated the massive app compatibility. Including the pre-configured and skinned iteration of Kodi, TV Center, makes getting started out-of-the-box pretty simple. The Mecool BB2 Pro TV box is an excellent pick for 4K streaming with its HDR10 and HLG HDR support, beefy hardware, and large library of compatible apps. Plus, it's a solid choice for cord cutters with access to Kodi addons for movies and TV.

There's no shortage of Android media players available including these 5 Android boxes. The Tronify MXQ is a solid quad-core Android TV box for your HTPC. Cord cutters may appreciate the WeTek Play for its combination of apps and integrated TV tuner capabilities.

Have you tried the Mecool BB2 Pro TV box? Which Android streaming media players do you recommend?