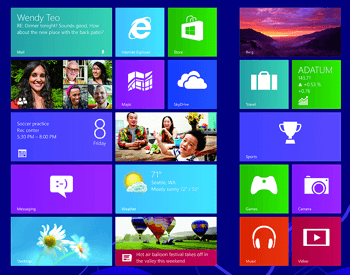 The computer giant, who largely depends on Windows license, has taken a humiliating U-turn after seeing Windows 8 face a struggle for some market share. Microsoft’s CEO, Steve Ballmer, first announced the release of Windows 8, for PC and tablets, in February 2012. He was so sure about its success that he was ready to ‘bet the company on it’. However, after its launch of Windows 8, in October, PC sales faced an uphill struggle.

The glitches in Windows 8

Even after seeing all the odds that Windows 8 has to fight before it reaches the success that Windows 7 held, Microsoft, rather optimistically, announced that more than 100 million licenses of Windows 8 have been sold. There’s no denying the fact that the new operating system has caused PC sales to drop. It’s hard to decide what is disturbing the people so much. Is it the Windows 8’s ‘Metro’ design that people find pretty but not as functional or it is the fact that Microsoft has eliminated its famous Start button? Are the people baffled by the Microsoft ‘ribbon’ that bags half the screen or is it the amount of effort, that one has to put in, to give a simple Shut Down command, that has cheesed off the customers?

In their effort to bring back some of the traditional, trademark Windows elements, millions of users have resorted to downloading Pokki, Start8, and Classic Shell. For most, it’s the drastic changes in the interface of Windows 8 that has brought them to this point of discontentment. For others it’s just the fear of change.

In the first three months of 2013, PC sales took the sharpest decline ever, falling almost 14%. Hence, Microsoft has, now, decided to take a U-turn. The company has sought to redesign Windows 8 to bring its customers back home.

How would Microsoft Redesign Windows 8?

The thing about Windows 8 that challenges experienced users is the absence of the famous Start button that has been there, since 1995. Windows 8 replaces the Start menu with an array of colorful tiles that look rather big in size. This has confused users to the extent that some have resorted to downloading Stardock. This allows them to have the Start button back while ModernMix allows tile apps to appear on the desktop.

Windows 8 is being blamed for a decline in the sales of PC’s. Tech pundits predict the redesigned Windows 8, codenamed Blue, to be released at the end of this year. A boot-to-desktop option might also be included to get around the interface of Windows 8.

The tech world now doubts Ballmer, who took the place of Bill Gates in 2000, as the man who the company can rely on. Despite the increasing popularity of computer monitoring software, Microsoft’s rivals have changed the map of the market with their touch based mobile computing devices. Microsoft is making weak attempts to retaliate.

It is interesting to note, how the success or failure of Windows follows an obscure but consistent pattern. Windows 3.1 was acclaimed by critics and masses, alike, while Windows 95 was not such a big success. Windows 98 got a thumbs-up while Windows ME didn’t. Windows XP did well in the market. Windows Vista wasn’t able to match its success. Windows 7 was praised worldwide by critics and as per the trend, Windows 8 has to go through a lot before it reaches the point where Windows 7 stands.