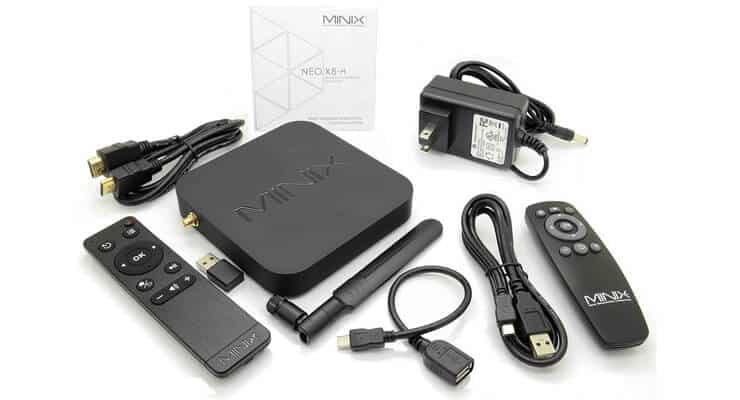 A small device with an eye-catching antenna, the MINIX X8 is actually a series of very similar devices with only little differences among them. For this MINIX X8 Review we will speak about the MINIX NEO X8-H, which offers a good price-value relationship, and although it is priced above $100, it is a solid option for people who want to grab the best HTPC mini PC for their Android TV box powered setup. In case you want to look at other Android TV boxes under $100, we also got you covered.

With such a big antenna in comparison with its main body, this device screams connectivity. It can be setup to grab content from a home network with no need to perform transcoding, by using Samba or NFS. This is a major point in favor of this device, when compared against alternatives like Roku or Apple TV, which is a huge advantage because you will not use processing time on your computer, other than the needed to transfer the files wirelessly to this device, and it will play them right away. The MINIX X8 doesn't require to be cast to, which is also a nice plus, when compared with alternatives like the Chromecast TV stick. But what makes this Android TV Box worth getting? We will delve into that in the following MINIX X8 Review. [Read: Chromecast vs Apple TV – Which is worth your money?]

MINIX X8 Review: What are its hardware and software features?

A great relief for the people who might not be tech-savvy and instead want to jump right away to watching their content in 1080p; this is an Android TV Box with XBMC, which means, it comes with Kodi for Android preinstalled. It actually has an older version, XBMC 13.2 Gotham; however, it enables you to go straight to watching your content without much fuss. You could also take a look at some of the most popular addons for XBMC/Kodi, in order to greatly enhance your experience with this device. The MINIX X8 is not only capable of outputting 1080p through its HDMI port, but also 4k; however, using this feature might cause a slight lag or stutter on your remote cursor movement, though this is fairly rare.

The MINIX X8 comes with Android 4.4 KitKat, and with it, you will be able to tweak tons of options to configure your media center to your liking, thanks to this Android TV Box Quad Core processor and 2GB RAM. You could even install some casual games to complete your entertainment options, if that interests you. Bear in mind, this is nothing like the NVIDIA SHIELD Pro in terms of gaming graphics, but that doesn't mean you can't kill some time on the big screen while deciding what to watch next. To this end, the device includes a useful remote, though some users seem to want more personalized interactions with their device, by choosing an appropriate keyboard and mouse combo, or installing either Kore or Yatse on an already owned Android mobile device.

The compact and powerful design we saw in our MINIX X8 Review, houses tons of connectivity options. The antenna makes it possible for you to connect wirelessly to your content and have it delivered to your TV. Although this device offers no HD support for apps like Netflix and HBO Go, the X8 models are capable of playing 4k/2k video with ease if you use other apps. A Gigabit Ethernet connector and 7.1 passthrough with optical output, frame the rest of connectivity options, with also 3 USB ports to connect all your peripherals into.

Would your MINIX X8 Review be a recommendation to buy this device?

The features offered by this device greatly exceed most expectations, considering its price tag. It is by no means a cheap device, but it isn't hugely expensive either. I would say this device is a mid-range Android TV Box, which can provide you with tons of entertainment, specially if you need a device with high connectivity options or you want to take advantage of the existing content within your home server.