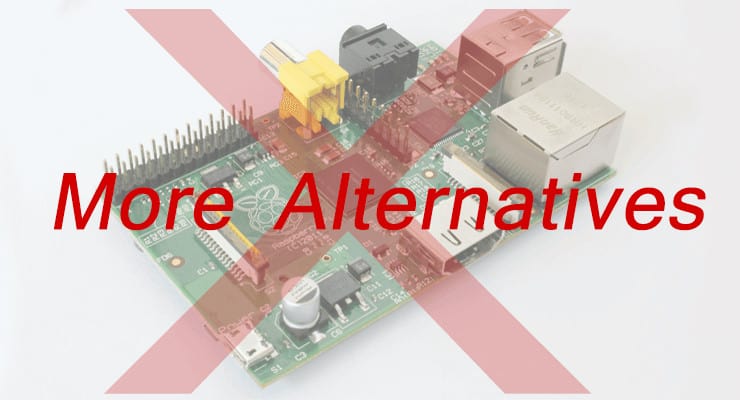 Once again we will be comparing against the standard 'Raspberry Pi B' board as opposed to the B+. Here's a quick rundown of the main advantages of the Raspberry Pi B+ board:

With the most important specs being the USB ports and GPIO pins, you can see that it doesn't make TOO much of a difference which we compare against. Now let us look at two more alternatives to Raspberry Pi.

The Banana Pi may be one of the lesser known microcomputer boards, but has been gaining some traction due to the increased performance at a similar price. It has the same board layout as the Raspberry Pi and supports the same addon modules, but the board itself is a bit larger.

A common misstep with those switching to Banana Pi is that they think, "Since it's supposed to be a clone, I should just be able to port my existing work to it, right?". Wrong, unfortunately. Since the Banana Pi's processor runs on an ARM v7 - instead of the v6 of the R Pi - you can't directly port your programs to it. Luckily, you can find help on their website for getting up and going quickly. [Read: 7 Raspberry Pi accessories to build a XBMC media center]

My favorite thing about the Banana Pi is that it's Android compatible. Apart from being one of the alternatives to Raspberry Pi, this allows full access to almost all of Android's apps with Google Play as well. While there are some small issues with it, overall it works very well - and is a feature that Raspberry Pi is sorely lacking.

Finally, let's compare the specs of these boards:

Need more power? The Odroid-U3 has you covered!

This board has a superpowered processor (the same one that's used in the Samsung Galaxy S3 smartphone), 4x as much RAM, and supports both Linux (xubuntu) and Android (4.x) operating systems. While the Odroid-U3 costs a little bit more than the Raspberry Pi at $65, it's a beast when it comes to performance - and one of the top choices for a media center. [Read: 5 Best Raspberry Pi Wifi adapters for you media center]

Not only that, but a survey by LinuxGizmos ranked this as the 3rd best single board computer - behind only the Raspberry Pi and BeagleBone Black. Therefore, don't overlook Odroid-U3 as one of the alternatives to Raspberry Pi.

You can find the full specs for this board right here on their website, but here's a quick rundown as a comparison to the Raspberry Pi:

Are Alternatives to Raspberry Pi Even Necessary?

This is something that I feel needs to be mentioned along with the multitude of R Pi alternatives I'm showing: Raspberry Pi is still the leader in microcomputers, and for good reason. It's a powerful board at an extremely affordable cost. If your project is already something that can work with R Pi, it may behoove you to use it instead - especially since it has a large and active community.

On the other hand - if you want to work with Android, maybe the Banana Pi is a better option. If you need far more power, such as a quad core Raspberry Pi, the Odroid-U3 is a great option. The U3 is believed to have six to twelve times the power of the R Pi. So there you go couple more alternatives to Raspberry Pi that may fit your need better than the Pi.