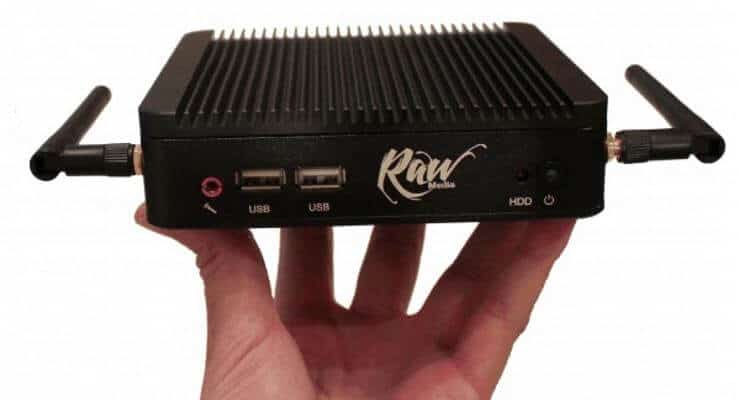 Raw Mini from Raw media is a mini HTPC build that is designed to be a perfect companion to your entertainment center. Almost all electronics and devices (except those of with viewing displays) are getting smaller and smaller these days. If you are looking to replace or add a micro HTPC with a very small footprint then the Raw Mini could be an option. The folks at Raw Media sent me a unit to test and review. I have been testing it for about a month now. Below you will find my opinion on the Raw Mini and how it fits the bill as a mini XBMC box and possibly more. [Read: 3 Best Raspberry Pi Alternatives in 2014]

The market is filled with Android TV boxes and some are even designed to be a mini XBMC player. If you want the features of Android on your TV then by all means go for an Android mini XBMC box. But if you want the flexibility of having a full fleged PC with the ability to run your own OS or a dedicated Kodi media center, then the Raw Mini could be a great option.

Raw Mini's specs are not going to blow your mind off but make no mistake, with the right Operating System, it is capable of doing everything you want to do and possibly more.

The Raw Remote comes with a nano sized USB dongle. It runs on a Lithium ion rechargeable battery and can work within a 30 ft radius. While the above are the advertised Raw Mini HTPC specs, upon opening up the box, I found a Intel AC-3160 Wireless card with Bluetooth. So it's Wifi is capable of running at 466 Mbps (theoretical) with a good Wireless AC Router.

One of the first things that struck me about the Raw Mini was its build quality. The outer case is made of Aluminum, which is great for heat dissipation. The built-in fan and the fins on the case also help with heat dissipation. I was impressed at how sturdy and premium it felt.

The Raw remote was very comfortable hold in hand. For its small size it surprisingly has almost all keys and functions as the full and currently top-of-line Logitech K830 wireless HTPC keyboard.

It is clear that the Raw Mini is built to be a mini XBMC box. Consequently it comes pre-installed with the latest version of XBMCBuntu. This allows it be used more than just a Kodi media center. If you would like to surf the web, you can fire up the Chromium browser and browse from your couch using the Raw Remote. HDMI outputs both HD audio and video (1080p). [Read: 10 of the Best XBMC Addons in 2014]

The power of XBMC (now known as Kodi) is well known and I won't go into that in this review. The hardware is more than capable of playing high definition video without any stutter. And it only takes about 10 seconds for it to cold boot and reach a stable Kodibuntu desktop.

In reality, comparing Android TV boxes to Raw Mini is like comparing apples and oranges. The Raw Mini is a true micro PC that comes with an intel motherboard, upgradable SSD, RAM, Wifi card, etc. and offers a great deal of customizability. Furthermore, in my experience, dedicated HTPCs tend to be much faster than Android XBMC boxes. The cheaper Android TV boxes may work in certain situations (kids room, garage, etc.) but if want to connect it to the TV for the purpose of running a media center then Raw Mini XBMC box is without a question a better option. Therefore, the right comparisons are with existing barebones mini HTPC computer builds. The Raw Mini HTPC's cost is comparable to most barebones systems and is competitively priced at $150 USD. You may get the the Raw Mini with all the bells and whistles (like the one shown in this review) for about $325 USD. [Read: 15 XBMC keyboard shortcuts you should know]

In essence, whether you choose an Android TV box or a Raw Mini HTPC entirely depends on your objective. If I were looking for a multipurpose HTPC for my living room then my choice would be Raw Mini. Another big reason why I would choose the Raw Mini is its flexibility. I can basically install anything I want on it. For example, I could install Windows on it, connect a USB storage device, install Kodi, CouchPotato, SickBeard, BitTorrent Client, and NZB Downloader on it build an always-on Windows home server. Testing with Kill-A-Watt, the average power consumption of this setup was a measly 13 Watts (plus 10 Watts from the USB drive).

In addition, I would could configure Windows Media Center to work with SiliconDust HDHomeRun Prime and watch live cable TV through HTPC and save myself $11 per month that my Cable company changes for my set-top-box. Even better I can run ServerWMC and watch all my cable TV channels through Kodi's PVR function. Hate Windows and don't like what XBMCbuntu offers? There other options like OpenELEC and the upcoming OSMC. You could play games, open and edit documents/spreadsheets, watch YouTube, surf the web, send/receive emails, all from the comfort of the couch. You could also connect peripherals such as webcam, printers, external hard drives, card readers, and more. The possibilities are endless and in my opinion this clearly sets the Raw Mini XBMC box apart from the Android based XBMC boxes. Read: How to Listen to Google Music on XBMC?]

Raw Mini is a definitely a great mini HTPC build with Gigabit LAN, Wifi AC, and best of all versatality. It could even be used as a compact desktop PC. But all is not great and there are couple of things that could have made the Raw Mini even better. All compact mini or micro HTPC generate quite a bit of heat and a well ventilated space is key. Unfortunately some entertainment center cabinets may not allow for good ventilation. Another bummer is the lack of USB 3.0. If I connect an external USB 2.0 hard drive to be used as network storage, then the USB 2.0 interface is less than half as fast as what the Raw Mini's Gigabit port can handle. This is only a con if you are going to use the Mini as as 24x7 home server that not only plays media but also serves as media server or file server. To play HD Video and Audio locally, a USB 2.0 interface is several times more than enough. So a USB 2.0 port may not be a con depending on what your purpose is. My experiments with Raw Mini HPTC will continue in the coming days. But overall, if you like compact HTPCs that can be tucked away and don't like to pick and choose parts to build your own HTPC then the Raw Mini HTPC is a perfect choice.