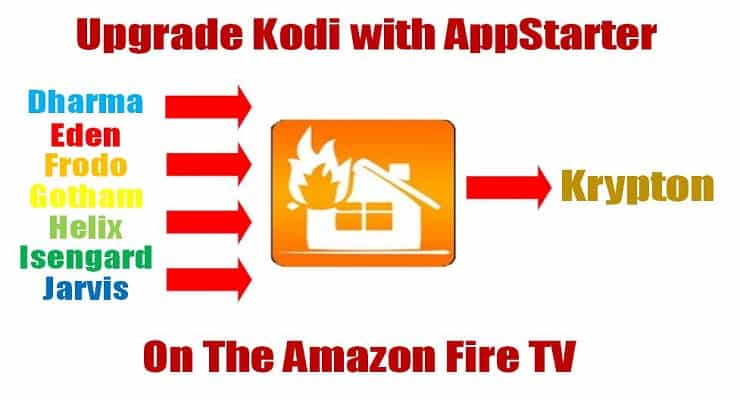 So, you have an install of Kodi on your Amazon Fire TV device and you are looking to upgrade it. It may be a Jarvis install or earlier and you filled the application with all of your favorite media and addons. Kodi installation isn't as simple on the Fire Tv as it is on Windows devices and you want to upgrade Kodi without losing any of your setup. There is an extremely simple solution to this using an application called AppStarter. In this post, we will update Kodi on Amazon Fire TV maintaining all of your data. AppStarter makes the whole process simple and the Kodi upgrade on Fire TV can be done in minutes.

How to update Kodi on Amazon Fire TV with AppStarter app

There are two stages to this guide post. First, we will install AppStarter onto your Amazon Fire TV device. Secondly, I will show you how to take an out of date version of Kodi up to the latest version which at the time of writing is 17.3 Krypton. [Read: Install Kodi on Amazon Fire TV using adbLink]

The AppStarter application is free to download and the easiest way to install it is using ES File Explorer. Before we begin, we need allow third party applications to be deployed to the Amazon Fire TV. To do this on your Fire device, select Settings and then scroll across to Device and select it. In this menu, open up Developer Options and you will be presented with the screen below. You must now enable both options: ADB debugging and Apps from Unknown Sources. [Read: Prerequisites to Install Unofficial Apps on Fire TV]

Open up ES File Explorer and  expand Favorite on the main menu. Select Add. You will be presented with the screenshot below where you can configure a new favorite. We must now tell ES File Explorer where to find the AppStarter application. The below image shows both the path and name to use. Enter these as shown and then select Add. [Read: Beginner Blueprint: Complete Amazon Fire TV Kodi Guide]

You will now have an AppStarter favorite in your list. Expand Favorites and click on AppStarter. On the right hand pane, the AppStarter-v4.0.zip file will appear. Select the file and ES File Explorer will start the download process. When the download completes, the below popup box will appear asking what you would like to do with the download. Click on Open File and the AppStarter install will begin. [Read: Sideload Kodi on Fire TV using AGK Fire APK – Method 4]

You will now be presented with the AppStarter install screen. It provides details on what AppStarter requires access to. Review the settings and when you are happy select Install. AppStarter is now installed and we can now begin the Kodi upgrade on Fire TV process. [Read: How to install Kodi using AppStarter on Fire TV – Method 5]

To start the Kodi Upgrade on Fire TV launch AppStarter and select Updates from the main left hand menu. The updates screen displays all of the versions of AppStarter, Kodi, and SPMC you have installed on your Amazon Fire TV. The image below shows these versions. Notice that on this Fire TV device I have an  old v16.1 version of Kodi installed. Select Check for Update shown below in yellow. [Read: 10 Best Amazon Fire TV apps for media streamers]

You will now notice that beneath your Kodi version AppStarter now gives details of the latest version of Kodi available that it has found. The screen below shows that v17.3 has been detected and is available for install. AppStarter will only display the latest full release. Select Update to latest Version shown below in yellow. [Read: How to find Amazon Fire TV IP Address?]

At this point, you will see a progress bar as AppStarter pulls in the Kodi install files onto your Fire TV. When it gets to 100%, the Kodi install screen will appear shown below. Notice that it has detected a Kodi install on the Fire TV and it states that your settings won't be lost. Review the device access that Kodi requires and when you are happy select Install. The update Kodi on Amazon Fire TV process will now begin. [Read: How to block Fire TV updates (unrooted)]

When the installation completes, launch Kodi and you will now see the latest available version of the software has been installed. Check that all of your settings, addons, and media libraries are intact. [Read: Block Amazon Fire TV auto update (unrooted) – Method 2]

It is important that you get the Kodi upgrade on Fire TV process right. You will undoubtedly have spent countless hours getting your media setup exactly how you want it and you don't want to lose your data and settings. AppStarter is a great tool that simplifies this process and allows you to perform the upgrade in minutes. You can regularly check for new versions and update Kodi on Amazon Fire TV as soon as they become available.