This is a guide on how to setup a VPN kill switch with UFW, aka Uncomplicated Firewall. Sometimes a VPN service or OpenVPN drops the connection for whatever reason and displays your IP address. It might mean that you lose your connection to a stream which is geo-blocked in your country, or your Internet service provider (ISP) finds out you are doing something like illicit torrenting (which we do not condone here at htpcBeginner).  They might throttle your Internet connection, or worse, you could end up with a fine. To avoid this, learn how to protect yourself with a VPN kill switch!

Like the name implies, a VPN kill switch with UFW will terminate your connection for your personal IP address which is not encrypted. Before beginning, you'll need a few prerequisites:

Open up a terminal and type the following commands to update apt and install UFW:

We need to enable UFW to run this command:

Gather information about your IP addresses

Before we continue configuring UFW, you need to know your VPN providers' external IP address. To do that, run the following commands which go to the OpenVPN folder and display the .ovpn files.

Here you have listed a bunch of .ovpn files. You have to choose the one you like, the fastest perhaps. Depending on how it's named, it could be something like au3.nordvpn.com.udp1194.ovpn or client.conf. [Read: Guide: Configure OpenVPN to autostart on systemd Linux]

To display the file information of .ovpn file run the command (where it says yourovpnfile.ovpn you need to type your chosen ovpn file name instead): 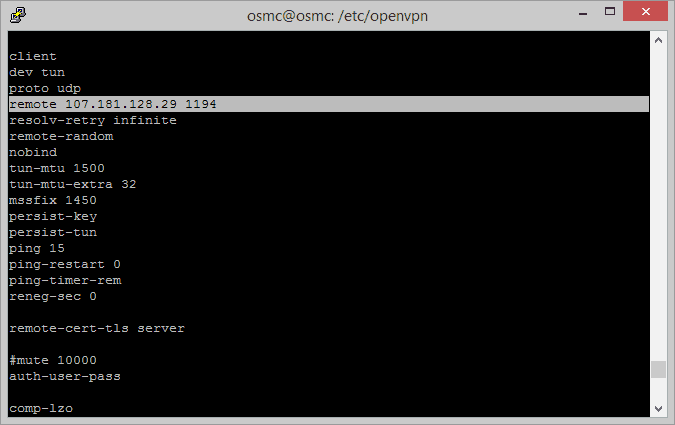 You should see something similar to this, on the highlighted line where it says remote, write those numbers down or a take screenshot of it. [Read: Guide: Configure OpenVPN autostart Linux connection]

The last piece of the puzzle which is your internal IP address. Run the command:

If your Linux box use wifi look for wlan0 if it uses an ethernet cable look for eth0.

This address might differ from yours. In the example above, look for the line that says inet addr:192.168.x.xxx and write your address down, where it says Bcast:192.168.x.xxx.

Have a look at these UFW commands.

Now let's allow access on the LAN network so that SSH is possible on your home network. Run the command:

Notice that the X you need to fill in your internal IP address. This is a typical looking internal IP, but they can differ so please double check your ifconfig.

Run the following command to block all connections except LAN. Next we are going to make an exception for the VPN. I'm assuming you are using the tun0 for your VPN so it can connect to the outside world. Run the command.

Find your VPN IP address, the one you typed down and run the command below:

Optional: If you want your device to be connectable by others, you should run this command:

Check if the rules work run the command:

You have a made a set of firewall rules that works as a VPN kill switch. All there is left to do is to test and enjoy it. Since you've figured ouw how to protect yourself with a VPN kill switch, try reading about a VPN and DNS to decide which is best for you.

What VPN tips do you suggest for staying secure while browsing?