The Ultimate Guide to Compile and Install MiniDLNA on Ubuntu 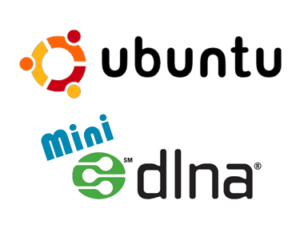 While a bit lengthy, there are certain advantages to compiling the latest version from Git and so I decided to provide updated installation instructions. MiniDLNA is being developed quite actively developed with several good fixes and upgrades. Without further delay, let us see how to compile and install MiniDLNA on Ubuntu 12.04 from the Git repository. These instructions should work on releases 12.10 and 13.04 as well.

Once setup, you will be able to stream content (with subtitles) to any DLNA compatible devices. In my case the devices are: LG 42" LED TV

Guide to Compiling from Source Code

We have made every attempt to make this guide newbie-friendly. Where ever possible we have provided pictures to guide you through the process. It would greatly help if you have a basic understanding of compiling packages from source on Ubuntu and we strongly recommend reading our 2-page beginner's guide. Also as described in that guide, install the prerequisites for compiling packages using the command below:

Why is this Method Better?

There are three other methods to install MiniDLNA on Ubuntu:

The first method requires that you download, extract, and replace files every time there is an update. The second method relies in the PPA being up-to-date for all releases. At the time of writing this guide, the PPA has been updated to only until 11.10 Oneiric. The third method installs whatever version is currently available in the official Ubuntu repository. While the latest version is 1.1.0 the Ubuntu repository currently has version 1.0.21, which several versions behind. So if you want the latest and the greatest you will have to wait. It takes about the same amount to compile and install MiniDLNA on Ubuntu compared to the method 1. But the advantage is that MiniDLNA is now custom-built to your system/OS environment and may be a bit more responsive. Furthermore, as explained later in this guide, it may be a bit more easier to install updates. So here it goes.

MiniDLNA depends on several packages to compile successfully: libexif, libjpeg, libid3tag, libFLAC, libvorbis, libsqlite3, and libavformat (the ffmpeg libraries). Some of them may already be installed but the two that were missing in my test system were libexif and libid3tag and the command below installed the two. It probably also installed a few more unneeded packages (few extra MBs) but it is much easier to do it this way.

How do you know which ones are needed in your case? When you run the configure script as described later, you will encounter errors if any of the above packages are missing. Retry configure after installing the missing package until all the errors go away.

First create a folder called .minidlna in your home directory:

Note that the . in the beginning makes it a hidden folder. Then cd to the .minidlna folder and issue the following command to clone the latest MiniDLNA files from the Git repository:

A folder called minidlna-git should be downloaded to the .minidlna folder. These are the files that need to be compiled.

Compile and Install MiniDLNA on Ubuntu

The first step to compile and install MiniDLNA on Ubunt us is to generate the files needed for compilation. cd into the minidlna-git folder that was downloaded and issue the following command:

You should see an output like the picture below when the autogen.sh script finishes running.

Next, configure the files for compilation using the following command (this will run for a few minutes at least):

If you encounter any errors due to missing packages, follow instructions described previously under Install Prerequisites. If the configure script runs successfully, it would end with the following (or similar) output.

Then make the installation files (the actual compilation process) using the following command:

If successful, the make process will end with a message similar to the one below.

The final step is to install MiniDLNA on Ubuntu from the compiled files. While you could use the sudo make install command we recommend using the checkinstall command:

This command takes you through a series of steps. If the documentation package directory is not available you will be asked to create one (doc-pack). 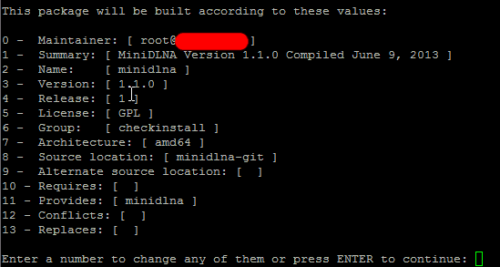 Upon continuing the compiled MiniDLNA package will be installed and it will appear in the package manager (example: Synaptic) for clean, easy removal later. In addition, a .deb package will be created that you can use to install the package in other similar machines or the same machine in future without going through compilation again.

MiniDLNA comes with a default configuration file. You will find it (minidlna.conf) inside the downloaded MiniDLNA folder. Create a copy of the file in the ~/.minidlna folder:

Then edit the file to make some minor changes. An example configuration file is shown below:

You are almost done.

Upon starting MiniDLNA builds the index of all the files. CPU usage will go up significantly during the indexing process but should come down to normal levels in a few minutes. "My DLNA Server" should now appear on the list of DLNA / UPNP Devices.

Now you should be able to browse and play media from your DLNA server on your client. Note that not all clients support all features of MiniDLNA. In my case I had no troubles playing avi, mkv, mp4, mov, mp3, flac, and jpg files.

To autostart MiniDLNA during system boot, create the file /etc/init.d/minidlna with the following lines in it.

If you want MiniDLNA to rescan library during boot, then in the above code, replace:

Keep in mind that this will make your system slow during boot as a lot of CPU will go into indexing your files.

Save, exit, and give the file execute permissions:

Then run the following command to update your init scripts:

That is it. Apart from autostarting during boot, you can now start, stop, restart, check status, and rescan MiniDLNA using the following commands:

When there is a newer version of MiniDLNA out you would essentially have to go through the compilation process again but not entirely. Navigate to the ~/.minidlna/minidlna-git folder where you first downloaded the MiniDLNA files using the git clone command. Issue the following command:

The distclean will clean and remove any files created during the last compilation. The git pull will automatically sync the local source files to the latest version in the git repository. Only the files that have changed since the last downloaded will be re-downloaded. Then then you compile and install MiniDLNA on Ubuntu as explained above. Issue the following commands in sequence:

When checkinstall finishes you should have the latest version installed.

If you want to uninstall MiniDLNA and cleanout all the files, then issues the following commands in sequence:

My MiniDLNA runs on a headless server with Webmin running. If yours is a similar setup then this webmin module offers an easy way to edit your configuration file, restart, and rescan MiniDLNA.