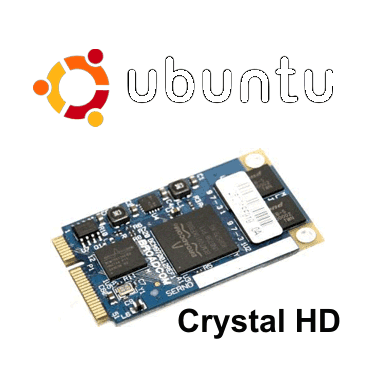 Although you may install Broadcom Crystal HD BCM70012 or BCM70015, the latter is newer and supports more formats. But it is also slight more expensive than its predecessor.

Note that the BCM70012 is full-height and BCM70015 is half-height MiniPCIe card (may come with an adapter).

Installing Linux drivers is complex compared to installing Windows drivers. The procedure described below (based on this) is for Ubuntu but it may also work on other Linux distributions.

Before you install Broadcom Crystal HD driver, you will have to install the packages necessary for compiling source codes and others:

Note that you may have many of the above packages already installed if this is not the first time you are compiling packages from source code.

This should download the required files to a folder called crystalhd within the active folder.

For Ubuntu 11.10 and later, the following edit needs to be made. Navigate to crystalhd/driver/linux and edit crystalhd_flea_ddr.c:

Add the #include <linux/delay.h> as shown below (the first two lines will already be present):

Then, execute the following commands in order:

If you have a multicore processor then you can increase the speed of compilation by using make -j4 (where 4 is the number of cores) instead of make. You may get CONFIG_DEBUG_SECTION_MISMATCH=y warnings during the build process. These are "generally" harmless so ignore them.

Again, you may replace make with make -j4 (replace 4 with the number of cores in your system).

After installation, load the driver using the following command:

Finally, check if the installation was successful using the following command:

You should see something like this in the output:

Do not worry if no application is using it currently (you may see "used by 0").

Although you may not have to reboot I prefer rebooting. So reboot your server. Then check if CrystalHD is listed in the output of the following command.

In my case, I have disabled all automatic updates including kernel. But if you update your Ubuntu kernel then you will have to do the following: