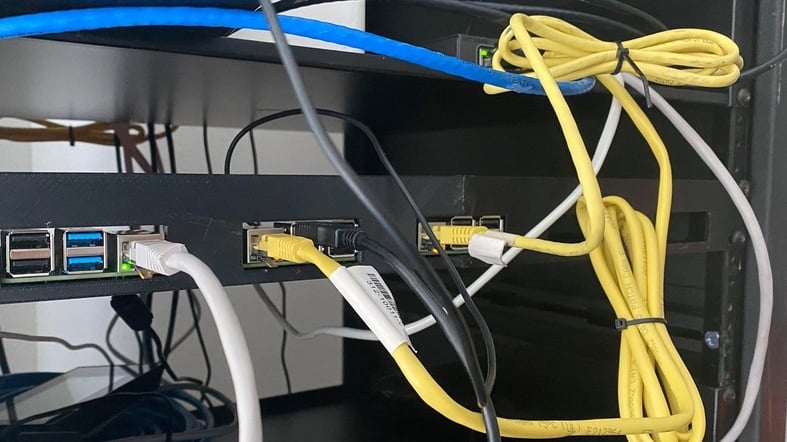 In this post, let us look at 5 of the best Raspberry Pi rack mount options available to build a cluster.

A Raspberry Pi rack mount can host several server applications running on several Raspberry Pi boards. The more Raspberry Pi boards used, the more evenly server roles can be distributed across multiple boards on a cluster. Anyone Pi board can use hardware connected to the cluster.

This creates an efficiency that allows the Raspberry Pi to be utilized for a higher purpose other than simple development and mere staging. Kubernetes and Docker applications are very easy examples of why one would create a Raspberry Pi cluster. Docker apps can be deployed easily across a network using Kubernetes, reducing the need to install licensed software locally on a client machine.

Docker is good for a great many things. In fact, it is such a popular app on SmartHomeBeginner, there are many articles and guides to read here. Anything you can do in Docker on one computer, you can use on another. For a good review of all the possibilities, check out some of the great articles on SHB. [Read: Ultimate Docker Home Server with Traefik 2, LE, and OAuth / Authelia [2020]]

BitScope Blades work with Raspberry Pi Zero, A+, B+, 2 & 3, HATs, Displays and other BitScope products, and are available in three editions:

BitScope Blades are a Blade Server solution for physical computing, which allow you to create clusters of servers for distributed and cloud computing. BitScope allows you to combine blade compute clusters in network connected racks to create cloud platforms. Examples of use cases are:

Not every Raspberry Pi rack mount comes with a complete software suite. Every BitScope app is powered by a virtual machine. And BitScope promises to deliver more software in the future, including a custom edition of Raspberry Pi OS for physical computing with Docker-based solutions.

There are many technical reasons to consider the UCTRONICS Ultimate Rack. For starters the adapter board was turned to reroute ports into a Power-Over-Ethernet HAT for compatibility with any PoE switches. Based on the UCTRONICS U6143 Raspberry Pi rack mount, rerouting the adaptor board means all I/O ports are on one side.

The OLED screen can also be programmed to display other information.

The UCTRONICS Ultimate Rack is ideal for:

A push-button switch allows you to shutdown selectively, rather than from the command line or by unplugging the entire rack.

The MyElectronics Raspberry Pi rack mount fits Raspberry Pi 4 Model B, 3B+, 3 Model B, 2B, R, and the first-generation Raspberry Pi 1 Model B+. Per each Raspberry Pi are two spaces for two connectors or other inserts. You can optionally choose to use LAN, USB3, USB-C, Audio, or HDMI connectors.

The GeeekPi 6-layer Raspberry Pi cluster case is a stackable Raspberry Pi rack mount case with heatsinks and a dogbone stack enclosure for Raspberry Pi models 4, 3B+, or 3 and 2 Model B. If want to consolidate and keep your boards cool, this is a great option!

Because of the vented enclosure, you can install any similar size fan and never worry about overheating your Pi boards again. One reviewer on Amazon recommends the Noctua NF-A9 PWM 92mm 4-Pin premium quiet fan, which happens to also be brown like the GeeekPi Raspberry Pi cluster case.

This Raspberry Pi cluster case can hold up to six boards, comes with all the necessary heatsinks and includes:

In about half an hour you can have all your Pi boards screwed into this case and ready to go. Made of sturdy aluminum, the GeeekPi Raspberry Pi cluster case allows access to all ports and slots, including SD card slot, GPIO port, USB ports, and HDMI.

Not only does the Eau Raspberry Pi cluster case include the quietest and efficient of all cooling fans you can buy, but it provides fans for each Pi for four layers, ensuring your Pi boards will stay cool to perform optimally. Better yet, this DIY item comes with a replacement warranty and money-back guarantee if you are dissatisfied. Eau promises a support response within 24 hours.

One thing to note before concluding. A Raspberry Pi cluster is not combined hardware such as two Raspberry Pi 4 boards with 8GB RAM equaling 16GB with two CPUs. Each Raspberry Pi still has its own IP address and functions the same as before. You still have two different Pi boards in terms of hardware, not one made of two.

An extra hardware IP address comes from the Raspberry Pi rack mount. A Raspberry Pi cluster case provides a new IP address as well. Though they are still the same hardware, they interact more quickly in the same rack than across the network. Creating a cluster, however, requires distributed computing or cluster-managed tasks, such as delegating server roles to each Raspberry Pi board.

Which Raspberry Pi Rack Mount is the best for building clusters?

The best for building clusters IMO is the BitScope Blade because it is supported by BitScope software and BitScope goes beyond the Raspberry Pi into other ARM devices. From the perspective of development, this makes it much easier to move a project from the Raspberry Pi to the next device.

The only issue with more advanced options such as BitScope is it takes much more time to upgrade a product supported by software than a product that is only hardware-based, such as the UCTRONICS, MyElectronics, GeeekPi, or Eau rack mount and cluster cases.

Another brand that proves this is the Turing Pi, which has a great model for Computer Modules 1, 2 and 3, but is currently developing a compact ARM cluster Turing Pi 2 for the Compute Module 4.

No matter what your use case is, my hope was that this article gives you a jump start on which Raspberry Pi rack mount to pick for your project.