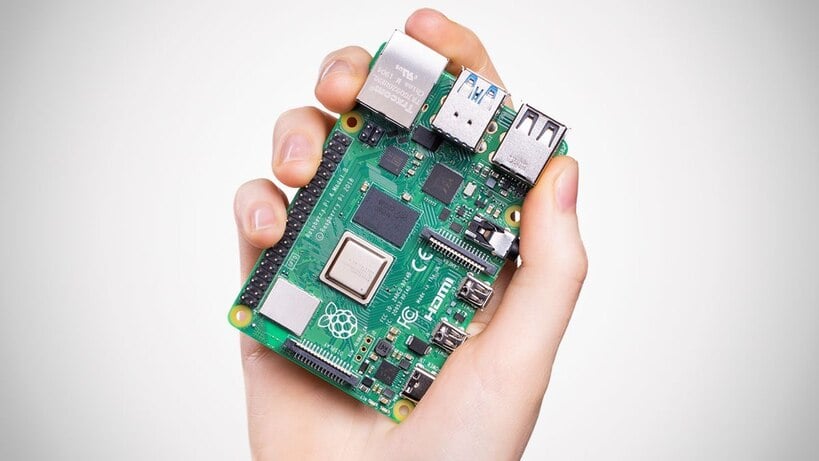 Raspberry Pi projects come in many varieties and are usually made to help you learn a technology you did not use previously. This was the original beginning for the Raspberry Pi as a development board, and how it found its way into the education system.

Spinning new technologies led to many more Raspberry Pi ideas, and a whole culture began. Today many projects are not only meant to educate but are also used in real scenarios for real reasons. You can do the same thing at home or even at work for your own use.

Raspberry Pi project ideas exist for every area of technology, such as home media server, ad blocker, router, home automation and VPN. Previously, I wrote an article Raspberry Pi Models and Cool Projects for each.

Now, I invite you to explore these cool Raspberry Pi projects and their possibilities.

Here are 8 suggested Raspberry Pi ideas for home, for both beginners and enthusiasts in 2022.

While commercial home automation solutions like SmartThings make it easy out-of-the-box, my experience is that it is only that, easy right-out-of-the-box. Soon after that you must rely on the ability of the commercial vendor to support your setup, and that brings on many hardware and software limitations.

Home automation is better with open source when you can configure the apps and features rather than rely on a commercial solution with strict control over how everything works in your home.

Home Assistant is free open source software, and there are many add-ons you can use without cost that offer you complete customization.

Some example ways to use Home Assistant are available on their website. Some of the more appealing options are:

If you have followed our Docker Media server with Traefik guide, installing home assistant is easy using Docker Compose from our GitHub repo. You could also follow the official Raspberry installation guide.

We have previously covered few specific topics on Home Assistant that may be of interest to you:

If privacy is your concern when selecting a home automation solution, the answer is openHAB (or Home Assistant). Because openHAB runs on hardware on your local home network and does not require cloud services, all your data is privately stored at home. This greatly reduces the risk of hackers getting control of your home security system or even peeking in on your security cameras.

Many useful software integrations for openHAB home automation are available for popular cloud-based smart home platforms if you do want to use cloud services. These include Google Assistant, Amazon Alexa, Apple HomeKit and more.

You can run openHAB on Linux, macOS, Windows, Docker, Synology and, of course, the Raspberry Pi. You can also easily access openHAB servers with web applications and mobile apps available on iOS, Android and Apple devices.

When it comes to media center applications Kodi Media Center is one of the most celebrated and used. Open Source Media Center or OSMC is a Debian-based Linux operating system entirely capable of running Kodi on the Raspberry Pi 4, 3 and 2. You can build your own Kodi box with your own preferred add-ons using OSMC.

Using OSMC you can very easily build a DIY TV box, capable of running TVheadend for OTA and IPTV channels with a fully featured TV guide with EPG and the ability to record shows. To broadcast your OTA TV channels you can use Amazon Fire TV Recast.

You can also use Home Assistant Cloudstorage and Alexa skills for Kodi with Kodi Connect to record and store OTA television shows with TVheadend.

For entertainment automation, you can connect a Home Assistant instance to Amazon Alexa.

There are many Raspberry Pi ideas that can come from Raspberry Pi projects using Kodi and other media software such as VLC. A minimal operating system like OSMC runs only Kodi and the software it needs to support Kodi and Kodi add-ons. [Read: Top Kodi Addons: Ultimate List of 93 Working Kodi Addons]

LibreELEC is "Just enough OS" for Kodi Media Center on a minimalistic Debian-based Linux distribution ideal for building a home theater personal computer or HTPC. In the case of the Raspberry Pi, a micro-HTPC. With the help of LibreELEC wiki and other supporting documentation you can install, configure, and use LibreELEC to run Kodi only on boot. [Read: How to install LibreELEC on Raspberry Pi3 – Kodi Media Center]

The LibreELEC developers create and host many Kodi binary add-ons to help you play all kinds of media files using various protocols. Featuring many Docker add-ons from LinuxServer.io, audio and video codecs and image decoders, LibreELEC also can play media files with inputstream parsers using its own version of FFmpeg.

You also can install and use various PVR clients or personal video recorders, along with cloud storage servers and local network attached storage or NAS devices. Virtual filesystems also work with LibreELEC, which means you can use virtual storage space.

On the more technical side you also get with LibreELEC a very wide range of program and service Kodi-addons, including but not limited to:

LibreELEC also comes with a wide selection of downloadable and installable skins, screensavers and other visualizations for Kodi.

One other thing about LibreELEC that sets it apart from OSMC and other similar Kodi-embedded Linux distros past, present and future is that it is read-only. That means it is tamper-proof and hacker resistant. [Read: OpenELEC vs LibreELEC – Comparison of operating systems for Kodi]

The Pi-Hole project is a longstanding ad-blocker among Raspberry Pi projects that controls the DNS on your home network. Using custom DNS with Pi-Hole blocks most invasive ads, and many streaming ads along with popular apps used by your devices like the Roku, Apple TV, Android smart TVs and Android TV devices. [Read: Complete Pi Hole setup guide: Ad-free better internet in 15 minutes]

AdGuard Home is a similar new entrant but a worthy competitor to Pi-Hole. [Read: Pi-Hole vs AdGuard Home – 12 Complete and Insightful Comparisons]

AdBlockers can be configured on some devices, or all, by changing the DNS server for the entire network or only specific devices. So, if Pi-Hole/AdGuard Home is blocking too much you can selectively exclude devices. For instance, TubiTV will not work when routing through the adblocker DNS settings. Some apps will not provide content if they cannot run ads, but most apps will still work normally.

Other key benefits of using PiHole or AdGuard Home, other than better user experience and privacy, is that your entire network will be noticeably faster and run much smoother. That is because even working in the background, advertising quickly become a resource hog.

With new emerging technologies like webOS, ATSC 3.0, and NextGen TV, it will be necessary to use an ad-blocker for network efficiency and also for security.

There are many ways to turn the Raspberry Pi into a router. All of these solutions work great, but if you want an efficient router you want a bonding router.

Another recommendation for building a Pi router is to use the DFrobot Routerboard or Seeed Studio's Dual Gigabit Carrier Board.

Note that the advantage to a Pi router is customization, but not price or performance. I would not plan on replacing your main router. I use mine on a separate segment of devices for development.

7. Set Up a Self-Hosted VPN Server with PiVPN

Many Raspberry Pi projects exist for turning the Pi into a VPN server for your home (e.g. OpenVPN Access Server on Raspberry Pi). But PiVPN is the simplest way to setup and manage a VPN on Raspberyr Pi.

PiVPN will prompt you to choose WireGuard, OpenVPN, or another VPN protocol on installation. Wireguard is the next generation VPN and its simplicity beats other protocols by a mile.

With wireguard and PiVPN, you should now be able to connect and use the resources on your home network from anywhere. In fact, if you have PiHole running on the same Raspberry Pi, you will not only have VPN but also enjoy adblocking on the go.

Other Posts in the Wireguard Series:

8. Build your own Retro Gaming Console

One of the coolest Raspberry Pi projects is to convert it into a gaming console. There are many ways to do it.

RetroPie is a famous one that turns your Raspberry Pi into a retro-gaming console. Another similar project is RecalBox.

Recalbox allows you to play 100s of retro games from several game consoles, with the ability to instant save, rewind, scraping, overlays, and more. [Read: Recalbox vs Retropie: Which retro gaming OS should you use?]

Raspberry Pi projects and ideas are never in short supply. All over the Internet you can find new ideas and new ways to construct old ideas. Whether for work or play, there are many worth finding and much worth trying. These are few worth mentioning, and worth trying!

What cool things can you do with a Raspberry Pi?

With the Raspberry Pi 4 there is a lot more power to perform and do more things on one board. For instance, you could install Debian based operating system on it and get started with a Docker Traefik server stack. You can take it even further by clustering Raspberry Pi with a rack mount.

There are countless uses for the Raspberry Pi development board and it is nearly impossible to cover them all. Some of them may seem daunting, others are more fun and easier. The Raspberry Pi projects listed above are, in my opinion, a great starting point. This is how I began with many setups both personal and professional.

If you have other ways you have utilized your Raspberry Pi, please share it with the community in the comments section below.