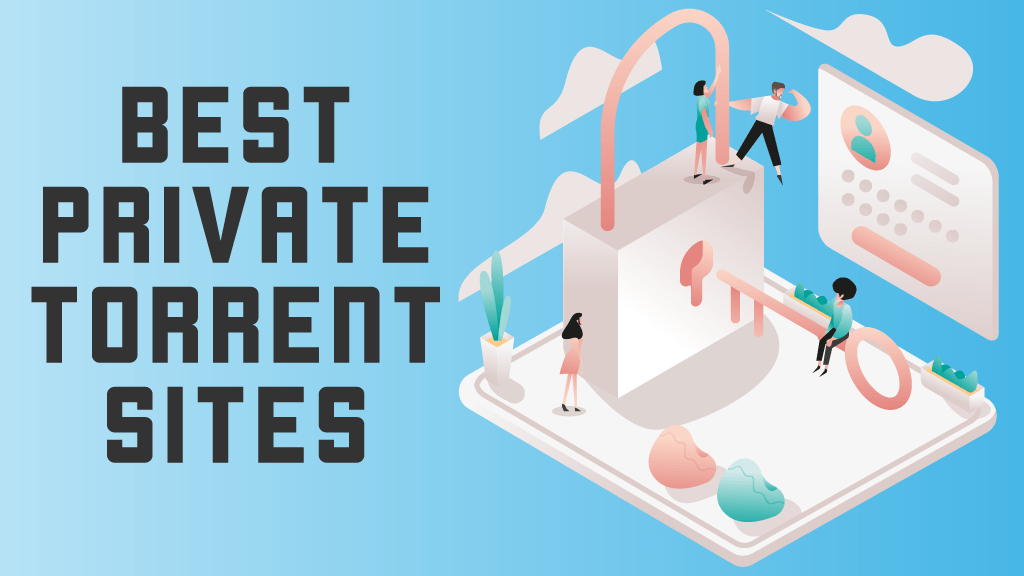 The Usenet community is still alive and well. These days, however, most people tend to gravitate towards Bittorrent for their media downloading needs. [Read: Complete Usenet Guide: What is Usenet, Usenet vs torrents, Downloading Files]

Popular torrenting websites, also known as public trackers, have made it easier than ever to find what you're looking for. These websites may seem tempting, but they don't come without risk. Copyright notices from your Internet provider and malware are becoming increasingly common.

Thankfully, there is an alternative.

As you may have guessed, there are private trackers as well. These private torrenting sites contain a massive selection of content ranging from ultra-high definition movies to obscure media. If you want it, these sites have it.

Before getting into our list of private torrent sites, let's go over a few of the basics.

What are Private Torrent Trackers?

Private torrent trackers work in the same way as their public counterparts, with some distinct differences. For starters, they are usually restricted to those that are members of the site. New membership to these websites is often extremely difficult if allowed at all. Users are also required to follow a strict set of rules and guidelines.

These rules by design not only to keep members safe from viruses and legal action. They also ensure high-quality content, provide lightning fast download speeds, and encourage good behavior among its users. A vast majority of private trackers also enforce a minimum seeding to leeching ratio. This means you need to upload more than you download, which allows other users to access those same benefits.

Rules vary from site to site, but other common requirements include:

Why Should You Use Private Torrent Sites?

Have you ever searched far and wide for that long-lost movie you couldn't find anywhere online? You know, the extended director's cut released on VHS sometime in the '90s for a limited time? What about that record your father lost decades ago from a band that only pressed 100 copies on vinyl?

This is where private trackers come into play.

In this aggregated list of private torrent sites, you'll discover where to find the best multimedia content available on the Internet.

If you're looking for the end-all-be-all of movie trackers, PassThePopcorn is the holy grail of film. 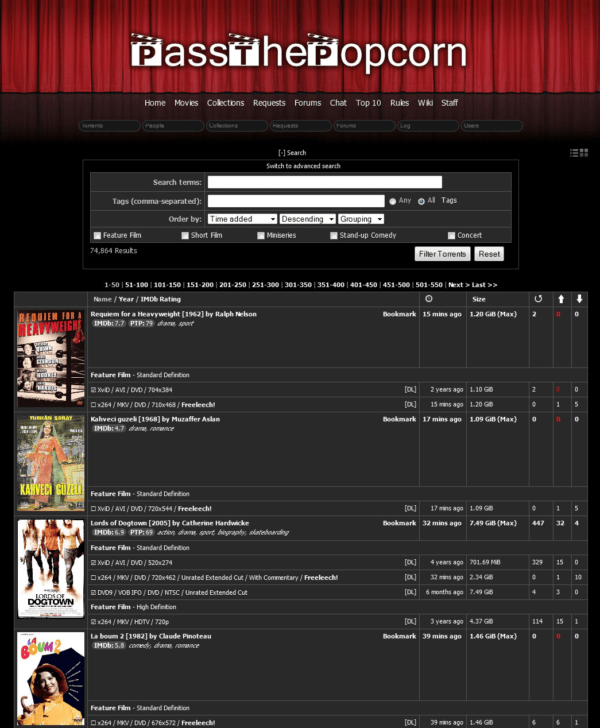 With a library of over half a million torrents to choose from, it comes at no surprise that this is the best private torrent tracker online right now. For comparison, the private tracker with the closest quantity of movies available has roughly half as many torrents.

PTP is going to be one of the harder trackers to get invited to, and registration is currently closed. If you are just starting out with private torrenting, it'd be best to join another tracker on this list to build up a good ratio and reputation for when it does reopen. It'll be worth the time and effort.

Being arguable the most challenging private tracker to access, you may have better luck with one of the many alternatives. For casual users, HDBits' ever-growing library will be more than enough for finding the content you need.

BroadcastTheNet sets a standard similar to PassThePopcorn, only with television shows rather than movies. This high bar ranks BTN among the best private torrent trackers around. Like PTP, this tracker runs on the Gazelle web framework created by WhatCD, which is widely regarded as the best private music tracker ever made and was shut down in late-2016.

Gazelle-based trackers are easy to use, extremely responsive, and provide a streamlined experience across any other similar private trackers you may use.

What sets BTN apart from the competition, however, is the fact that it does not require you to maintain a minimum ratio on the site to download. This unorthodox system as such makes it one of the more difficult trackers to join, only offering direct recruitment and an invite system. This makes BroadcastTheNet one of the best private torrent trackers around.

If BTN proves too difficult to join, MTV is your next best bet for television. Though undergoing maintenance at the time of writing, MoreThanTV administrators have indicated that the site will be back online and better than ever.

When WhatCD met its demise in 2016, two music trackers rose from the ashes, REDacted and Orpheus.

Though these two trackers share a lot in common, RED is commonly known as the go-to music tracker. Its sheer quantity of music from every genre imaginable set it apart from competitors. If you're looking for lossless audio in FLAC, RED has you covered, while also offering plenty of other compressed formats as well.

For those new to the private torrent community, this is your best bet at getting a foot in the door. RED has an invitation process similar to most other sites, but also offers an interview process over IRC where you will be offered an invitation once you pass a series of technical questions.

Once you're in RED, it's not terribly difficult to climb up the first few ranks and unlock perks on the site. One of these perks is the ability to access the invitation forum, where you can gain legitimate invitations to other private trackers for different forms of media. This is the preferred way to go about joining other sites, as buying a paid invite off of any unofficial forums can result in a permanent ban.

If you're an audiophile looking to expand your music collection, you won't want to pass this one up.

While Orpheus does not boast as vast a collection as REDacted, power users of the tracker are quick to fill requests and provide a welcoming community full of knowledgeable users. Orpheus' bonus system also makes it considerably easier to maintain ratio, allowing users to purchase tokens to download freely.

For book worms out there, reading can get expensive. Naturally, there's a private tracker for that as well. 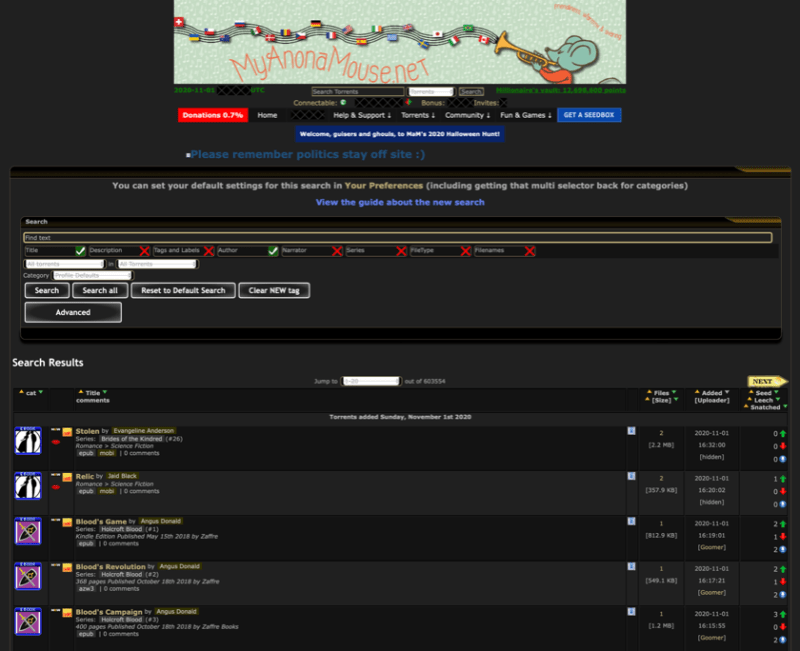 Although Bibliotik is traditionally known as the king of book torrent sites, MAM offers something that most trackers can't compete with: kindness.

Joining MyAnonaMouse is straightforward and can be done through an IRC interview similar to REDacted. This interview requires much less technical knowledge and is geared more towards evaluating if you'd be a good fit for their generous community.

MAM has strict rules regarding swearing and offensive language, and the members of the site are as helpful as you could possibly imagine. What sets this tracker apart from Bibliotik is its wonderful bonus point system and Millionaire's Vault. Adding bonus points to the vault can lead to free download tokens for every user who contributes once it reaches a specific amount.

When attempting to join this private tracker, it is important, to be honest, and caring when talking about why you want to join and what you'd like to read. Always remember that there is a human on the other side of the screen who wants to make sure their website stays safe for all users.

Bibliotik may be tough to gain membership to, but its immense selection of literature sets the tracker apart from the rest. If you often read books that are hard to find elsewhere, you can count on this private torrent site to have it.

If you're a gamer, there really is no option other than GazelleGames, and that's not a bad thing. GazelleGames, or GGN, is a bit more difficult to get into, though not as hard as PassThePopcorn or BroadcastTheNet. The site allows new users through the use of direct recruitment and an invite system. Building a reputation on an easier tracker and asking for an invite through that website's forums is your best bet. That being said, always double-check if requesting an invite is allowed in the first place. Private trackers tend to allow one account per lifetime, the last thing you want is a ban.

With executable files like video games, it's even more important to make sure that the installation isn't malicious in any way. Though there is always the possibility of that happening on a private tracker, that likelihood is greatly reduced.

Honorable Mention: Not available. There is nothing that comes close to GazelleGames.

IPTorrents is the largest of the general private trackers, indexing an incredible amount of content of all kinds. For general media, this is the absolute best private torrent tracker out there.

For those that don't want to wait and would rather skip an interview process, IPT allows donations. With a selection as robust as IPT, this is definitely an option for anyone looking to get onto a private site quickly and easily.

At the time of writing, the minimum donation to gain membership is $20 and includes VIP status, 10gb of upload credit, and 2 extra invitations for inviting any friends as well.

Between AlphaRatio and TorrentLeech, another popular alternative for general torrents, AlphaRatio wins second place due to its helpful bonus system. AlphaRatio is also easier to join, making it a viable option for most users' needs.

Although AudioNews is primarily a tracker for audio production software and sample libraries, it offers more content than you'd expect. Among the countless digital audio workstations and sound banks are fantastic video courses and e-books related to content creation and web development, essentially giving you access to learning materials required to master any software you do decide to download from the website.

Maintaining a ratio on AudioNews is slightly more difficult than other trackers. There is no bonus system, but with time, you learn how to increase your ratio effectively. This is another great first private tracker since registration is open for new users on the 1st of every month. Keep in mind that this is according to the time in Moscow, Russia, which will vary in other locations.

AudioNews reigns supreme in this category, but ProAudioTorrents is a close runner up. While the selection is not as large, you may find that this tracker is more than enough for your audio production needs.

If you're going to download content online, you might as well take proper precautions. Stay safe and ensure you get the highest quality content with the sites from this list. Using the best private torrent trackers will guarantee your torrenting experience is as enjoyable as possible.

You will also come to learn that each private tracker has its own incredibly knowledgeable communities. Members that are eager to help, so long as you are respectful and follow each site's rules. When joining these elusive websites, always remember to act with good intentions.

Jake is a college student, writer, and technology enthusiast based in Los Angeles, California.