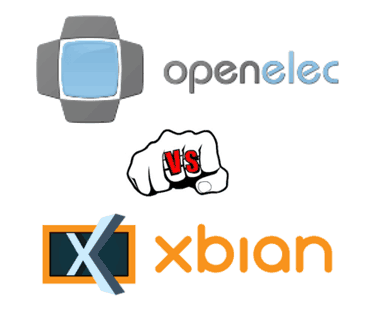 This post is a shootout of OpenELEC vs Xbian, with OpenELEC overclocked to the same level as Xbian. In my recent comparison of Xbian, OpenELEC, and Raspbmc (Part 1 and Part 2), it was clear that Xbian was the fastest and most responsive operating system for Raspberry Pi media centers. One of the hidden factors in the comparison is that Xbian is, by default, overclocked to work at higher speeds. This may have slightly tilted the balance in favor Xbian. Moreover, most recent Xbian (1.0 Beta 1.1) was compared against OpenELEC 3.0.5 Stable and not the most recent version (OpenELEC 3.1.6 Beta). I had several requests, from including the OpenELEC developers requesting further information and pointing out that OpenELEC 3.1.6 brings new features with improvements in boot speeds. Therefore, I decided to give OpenELEC 3.1.6 a whirl, overclock it to the same level as Xbian, and compare the performance to that of Xbian. So here it goes, overclocked OpenELEC vs Xbian for Raspberry Pi media center.

It is important to understand that the primary objective is to run a low-power media center that can play HD video from home server through the wireless network. The comparison was on the barebones Raspberry Pi with a Transcend 8 GB Class 10 SD card. Note that all tests were done on the same SD card. After testing each OS, the card was fully formatted using SD Card Formatter. Find the versions compared below and read on to know more about Xbian vs Raspbmc or OpenELEC.

Raspbmc was left out of this comparison because, in my previous comparison, it was a distant third after Xbian and OpenELEC.

Nothing has really changed here. I still find Xbian installation the easiest. However, OpenELEC is not too far behind and takes only a couple of minutes extra. On Linux, its a matter of downloading the compressed file, extracting it, and issuing a command to write the files to the SD card. On Windows, it is as easy as downloading the image file and writing it to the SD card with an image writer.

Winner: Xbian (OpenELEC is not too far behind).

Previous comparison showed that Xbian was the leader with an average of 37s, followed by OpenELEC (3.0.5) at 49s, and Raspbmc (July 2013 Update) at 78s. Well, overclocked OpenELEC vs Xbian showed a completely different picture. It is amazing how fast the recent OpenELEC version boots. Granted, overclocking also played a significant role in the faster boot speeds. Below are 5 recorded boot times (time taken to reach stable XBMC interface that is ready to navigate):

Clearly, overclocked OpenELEC 3.1.6 is better than Xbian and Raspbmc.

Operation speed of OpenELEC vs Xbian was compared by navigating to various windows, opening libraries, opening addons, opening settings, and changing library views. These tests were done after setting up a library of 212 Movies and ~1200 TV show episodes. Here too, Xbian was better initially. However, after overclocking OpenELEC both distros were neck and neck and I could not notice visible differences in the operational speeds.

I am adding this category because, wireless performance is something that is important to me. My Raspberry Pi is connected to my Wireless Network through an Airlink 101 AWLL6075 USB Wifi adapter. After my initial comparison of OpenELEC vs Xbian vs Raspbmc. I settled with Xbian, but I started having problems with video playback from my home server. After few minutes, the video would sometimes freeze and and the only way to move on was to cut and reconnect the power source. I may be wrong, but I am going to assume that this is a wireless related problem.

On the other hand in OpenELEC 3.1.6, not only was Wireless setup a breeze but my initial assessment shows that the performance was also much more stable.

In my previous tests, Xbian clearly had the best options, features, and other less but nice-to-have bonuses. However, OpenELEC has clearly stepped it up in the 3.1.6 Beta release. I noticed several new updates and improvements, including the awesome boot and operational speeds presented above. OpenELEC settings menu has been improved and expanded to provide several options including: bluetooth support, network settings, ability to mount network drives, clearer update options, XBMC backup options, and more.

One of the new, unique, and nice feature I noticed was the first time boot OpenELEC configuration wizard. Basically, the first time you boot your Raspberry Pi with OpenELEC, you will be presented with a very nice configuration wizard that walks you through various settings including Host Details, Wireless Setup, Services Setup, etc. I think that this is a great newbie-friendly feature.

While OpenELEC still lacks a package manager such as the one in Xbian to simplify installing apps such as CouchPotato, Sick Beard, or Torrent clients, there has been significant improvements in the recent version. It all boils down to what one wants. For me, I do not intend to use my Raspberry Pi as a download server. As I mentioned earlier, my main objective is to setup a Raspberry Pi media center to play content from home server through the wireless network. So it is not going to be ON 24/7 but will turn ON or OFF with the TV. For this reason, I am changing my pick for options and features in OpenELEC vs Xbian, from Xbian to OpenELEC.

One of the problems I highlighted in OpenELEC was the shutdown problems. That persisted in the new version. Sometimes I could not get the Raspberry Pi to power off successfully. It would freeze or it would restart the XBMC interface. But I was able to narrow this problem down to a specific situation. It only happened when I tried to power off Raspberry Pi while it was still performing the post-boot tasks (eg. initializing services such as SAMBA, SSH, etc.). After the first 1 minute or so Power Off worked as expected. In real-world situations no one is going be trying to power it off immediately after boot.

Another nice improvement I noticed is in the wireless setup. Like Xbian, OpenELEC now shows a list of available Wireless Networks for you to choose from. In addition, the Passphrase is now visible while you type it, making it mistake proof.

Nice boot/shutdown animations like in Xbian are still missing but if a system reliably boots and shutsdown quickly, I do not mind not having these animations. Also missing are the commandline menu to configure/setup the system such as the one Xbian has. May be I haven't figured it out or not found it yet, but a commandline menu wouldn't be a bad thing to have.

I never expected my views to change within a matter of 2 weeks. Xbian was the clear standout in my initial assessment. As things stand right now, I think that for my purposes of running a stable reliable wireless Raspberry Pi media center OpenELEC seems to have taken lead. But if you would prefer ease of installation of packages for apps such as Sick Beard, CouchPotato, Transmission, etc. Xbian makes it much more easier for you.

If there is one thing that we can learn from this experience then it is that continuous development on these Raspberry Pi Media Center distros makes it harder for the end users to decide and stick with one distro. If you have ever rooted and tried custom ROMs on Android phones, then you would understand exactly what I am talking about. Nevertheless, I think the end users or the consumers are the winners here because we have these talented developers working hard to provide a better product and trying to accomplish the impossible task of satisfying everybody. At this point of time, for my situation, the answer to OpenELEC vs Xbian has tilted towards OpenELEC.