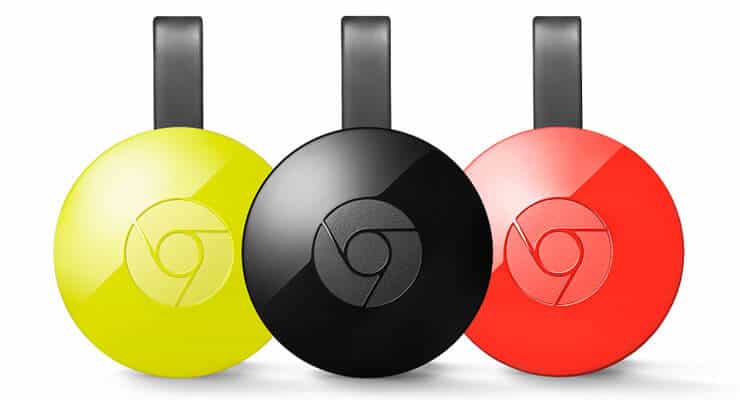 As this world of ours grows in mobility, there are increasingly more things we want to take with us on our travels. One of these things would be our media center, to hook it up to any TV set -if it has an HDMI port- and be able to watch our favorite shows and movies. However, I don't know if you value comfort, but I do, and personally, I don't see myself carrying around an NVIDIA SHIELD TV or a Gigabyte Brix Pro just so I can watch 2 hours of content on my hotel room or wherever. A more portable alternative should be available, shouldn't it? [Read: CX-919 Android stick: Take your media center with you]

Well, there are good news -and not so good news as well- in our Chromecast 2 review. These small devices are now hockey puck-shaped and retain the abilities of their older counterparts; however, they are a bit harder to come by now, since they can't be bought on Amazon (at least, they weren't available when this note was written) due to some marketing movements from the online retailer, apparently to push their own hardware line, such as the Amazon Fire TV 4k and the Fire TV stick, though you can still get Google Chromecast 2 on the Google store or other major retailers. Nevertheless, if you don't wanna fiddle around and just want a media player quickly, you may take a look at some of these cheap Android media players; however, if you want to know what this screencasting dongle has to offer, then keep on reading our Chromecast 2 review.

A handful of available colors -black, yellow and red-, and an integrated HDMI cable are the prelude for the capabilities of this small device that, for the most part, only has the upper hand over its predecessor in convenience and ease of installation. In our Chromecast 2 review, we saw that there are several Google Chromecast apps, or apps that are compatible with this device; and you can mirror the screen of your phone or tablet to the device as well, if it's needed. This means the HTPC capabilities wouldn't really reside on the small round disc behind your TV set, but in your mobile device. This is pretty conveniente from a mobility point of view; after all, we always carry our mobile around. If you want to take a detailed look at the specs of the Google Chromecast 2, you will be able to find them below.

The Google Chromecast app has been revamped and offers a new look, emphasizing content over technical settings, and successfully becoming the new content hub of your television, in your pocket. This is an amazing feature we saw in our Chromecast 2 review, even though it requires, of course, that you have a decent smartphone or tablet with good specs, after all, it will be the device that will be doing the heavy lifting. You can use the Google Chromecast 2 for pretty much anything you used the previous version, though I'm sure the new app will let you discover more ways to enjoy content as you use it. Regarding apps such as Kodi for Android, you can't really cast from the app, as you will see if you browse the Kodi forums about Chromecast, however, there are workarounds to solve this, such as Kodi app versions where this functionality has been added by third parties. Usually when you cast from your phone or tablet, the screen of your device will either turn off or act as a remote control, but it ultimately depends on the app you use.

Chromecast 2 review: Do you recommend it?

From our Chromecast 2 review we can see that the short answer to this question would be "yes", however, the long answer would be "it depends". Why? Well, the device is inexpensive and small, and almost everyone has a smartphone nowadays (iOS users will be getting the Chromecast app soon, too). This in itself makes it great to own, since it is the perfect companion to enjoy content on your big screen. However, if you already own an HTPC device, or want a full featured media center and don't really care about having movies or streaming addons in your mobile, then I would advice against buying the Chromecast. In my opinion, the small price tag and the potential uses it has, plus the ease of transportation (you can actually fold the HDMI cable and, with a small magnet, it is held in place) make the Google Chromecast 2 a device worthy of being looked at, even if you can't find it on your favorite online retailer.