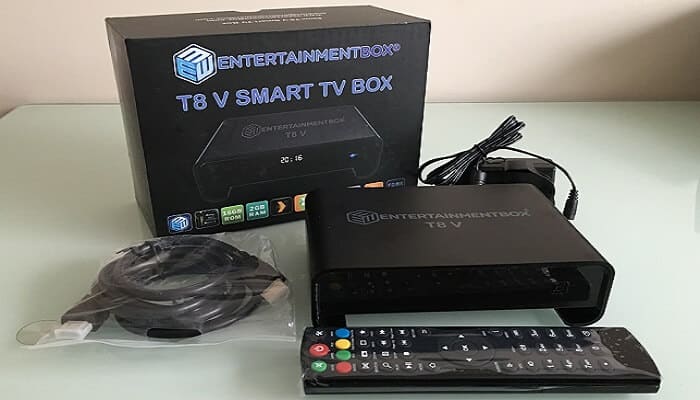 With the HTPC market booming there are many new set top boxes and TV stick solutions hitting the online stores. One of the latest products to enter the arena is the Entertainmentbox (Ebox) T8 V Smart TV Box solution. The device is a small box designed to turn any TV with a HDMI socket into a smart TV. Utilizing the Android OS we should expect greater functionality than a standard smart TV and many of the features used in purpose built HTPC systems. In this post I will provide a full Ebox T8 V review highlighting the key features and usability. We will take an in-depth look at it's specs and find out exactly what this product can do.

When unboxing the T8 V Smart TV Box the first impressions of the product are very good indeed. The device is small and compact and is a little bigger than the size of your hand. The box has modern feel to it with a brushed aluminium plate wrapping around the LCD display. On the rear of the device you get both a USB & micro USB port, audio jacks, Ethernet and of course the HDMI socket. All of the device ports are located on the back of the device keeping them well out of view. The look of the T8 V is impressive and with it's small size it will sit nicely on top of your satellite receiver.

The T8 V Smart TV box has space for local storage. Pop open the hatch on the underside to reveal a hard drive bay supporting a single 2.5" hard disk. If you are using this set top box as a streaming device then the on-board 16GB will be more than enough but it gives us the option for storing media libraries. This is a neat little feature considering the entire box is only slightly bigger than a full size 3.5" hard drive.

So what does the T8 V Smart TV Box have under the hood? Full Ebox T8 V review specifications are listed below:

The Octa-core processor provides fluent navigation of the system menus and excellent multitasking capabilities. The graphics processor is also worth a mention here. It is certainly better than those with many of the set top TV boxes on the market and will open the door to Android gaming. The box fully supports 4K video and can be used for both 4K streaming and 4K video files.

You will not find a smart TV box solution that is easier to use than the T8 V Smart TV Box. On first boot you are asked to adjust your screen settings followed by entering your network details and that is pretty much it. You can be up and running in under 5 minutes. The navigation system is clean and uncluttered. TV boxes provided by Amazon and Google tend to be filled with product advertisements and premium streaming content but with this box you only see your applications.

It comes preloaded with all of the HTPC applications you would expect like a web browser, weather and access to the Google Play store but also a set of preinstalled apps. Click on the Apps icon and you will see ready to launch popular app choices such as BBC IPlayer, YouTube, NetFlix, IPVanish, and even Plex. There are also file management tools available and the device is not locked down in the way that so many other products are. [Read: Guide: Easy Kodi VPN Android setup with IPVanish]

One of the core applications of the T8 V smart TV box is EBMC which is a version of Kodi tailored for this device. You can customize this version of Kodi exactly as you can with the standard Android package and it comes preloaded with many popular plugins. Use the file manager to upload your movie collections to the internal storage or connect it to NAS drives for larger libraries. You can then fully access them with EBMC. [Read: Kodi Beginners Guid p1: What is Kodi?]

The TV 8 V Smart TV box has one of the easiest navigation systems you will find. The initial dashboard is clear and concise and unlike many TV stick devices the navigation is fluent. The user interface is divided into two screens. Your Home screen contains all of the general HTPC icons with access to EBMC and a second screen is provided for you to set favourites and frequently used applications.  Applications are easy to install and the favourites screen gives you simple access to them. There are also several accessibility options you can use to improve the ease of use even further. [Read: 6 Must have Kodi addons for Broadcast TV streaming]

During the Ebox T8 V review, we tested a number of different file types including AVI, MP4 and MKV. MKV is not listed on the box as a supported file type but is now widely used for HD video content. The video playback is excellent and the picture and sound quality were superb. When you open a media file using the file manager you are asked which playback software you would like to use. The EBMC application of course fully supports MKV files including 3D and 4K.

The T8 V Smart box is a worthy solution for anyone who wants an affordable no nonsense HTPC device. It is one of the easiest media players to use and the setup time is next to nothing. The majority of applications you will need including Kodi all come preinstalled and are ready for you to launch. The simplicity of the navigation system was impressive with fluent movement between your applications and screens. The device looks great and has the feel of a modern satellite receiver. With the T8 V Smart box only slightly bigger than a 3.5" hard drive the internal 2.5" drive bay is a nice touch and can be used to store plenty of media files.

Utilising the Android 6.0 Marshmallow operating system you can install the majority of applications available on the Google Play store, expanding the capabilities of this solution. Also the EBMC - Kodi application gives you instant access to the best media center software on the planet. Our Ebox T8 V review found the device to be a great little media player and is the perfect hardware for Kodi, Plex and many other HTPC software solutions.