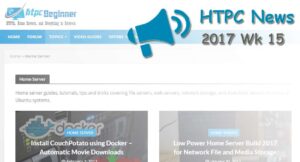 Welcome to the htpcBeginner HTPC News Roundup, April 14, 2017 edition! This week saw the FCC quicken its move to overturn net neutrality, Ubuntu 17.04 released, and a neat new self-hosted BitTorrent search engine that can't be taken down. Plus, check out how to setup Subsonic with Odroid C2, as well as install and setup Ember media manager for Kodi. Read on for the latest in HTPC news and updates!

YouTube TV needs more channels, but it gets the basics right

YouTube launched its own streaming service, appropriately titled YouTube TV. The subscription offering aimed at cord cutters offers pretty basic channels at an entry-level $35 a month. Among the smattering of television channels, you'll find SyFy, FXX, ABC, CBS, ESPN, and Fox Sports. As Engadget reports, YouTube TV satiates a niche: sports fans. While movies and TV are covered pretty will through a combination of platforms including Netflix, Hulu, and Amazon Prime, sports remain difficult to stream. Notably, Kodi does offer loads of sports addons. With YouTube TV there's an unlimited DVR feature as well as live games. The channel lineup is still a bit sparse, but it compensates with its sports coverage and DVR. [Read: A cord-cutter's dream all-in-one: OpenFLIXR Media Server]

FCC Chair Aims For Quick Reversal Of Net Neutrality Rules: Is It Time To Review Our Internet Usage?

FCC Chair Ajit Pai aims to completely overturn net neutrality. Moreover, Pai shoots to reverse broadband privacy legislation by the end of April. In addition to stripping the present rules, the means to keep the internet open would remain voluntary. ISPs such as AT&T, Verizon, and Comcast attempted to assuage concerns of consumer privacy. Still, end users have much more to worry about than snooping ISPs. There's an increasing incentive to use a VPN regardless of whether you have something to conceal or not. It's less a matter of keeping illicit behavior private, and more maintaining a semblance of internet privacy. [Read: VPN vs DNS: Which one should you choose and why?]

Although Usenet is growing in popularity, torrents are nevertheless a viable and widely-used medium for downloading. P2P continues to rank among the most popular file sharing methods. Unfortunately, torrent websites are usually vulnerable on account of remaining centralized. A new self-hosted, anonymous BitTorrent search engine, magnetico, spawned from a Turkish developer. Essentially matnetico employs BitTorrent's distributed hash table (DHT) which eschews the need for trackers. Although magnetico is still in its development infancy, you can check out the GitHub and try out this neat new torrent project.

Kodi came under fire on account of illegally streamed content. Large organizations such as the football (or soccer) association the Premier League worked with ISPs to crackdown on illicit streams. Now eBay and Amazon joined the fray by limiting the sale of "fully loaded" TV boxes. These come packed with Kodi addons allowing access to illegally broadcast content like sports and films. For example, lots of these "all-in-one" Kodi boxes feature IPTV content. It's important to remember, whether you support illegal streaming or not, that these Kodi boxes are not associated with the developers behind Kodi. Rather, Kodi is merely an open-source media center, and addons are community created. [Read: 10 Best Kodi Skisn 2017 - For HTPCs and Kodi Streaming Boxes]

Ubuntu 17.04 Available to Download Now, This is What’s New

Linux operating systems abound, from well-known Linux distros like Linux Mint to fringe offerings like Hannah Montana Linux, and the penetration testing-focused Kali Linux. Ubuntu stands as consistently one of the most widely-used and popular Linux distros. The newest release, Ubuntu 17.04, debuted this week. Stable ISOs are ready to download in a variety of flavors including Ubuntu server, Mint, and Lubuntu. Ubuntu 17.04 includes the likes of Firefox 52, LibreOffice 5.3, Rhythmbox 3.4.1, and Nautilus 3.20.4. It's a fairly major update with Linux Kernel 4.10 as its base and a new swapfile aimed at increasing free disk space. Ubuntu is an excellent foundation for a media server, and with software such as Madsonic, PlexPy, Radarr, and more available on Ubuntu. [Read: 10 Best Linux Home Server Distros -Stability, Performance, Ease of Use]