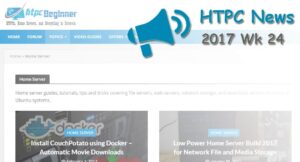 Welcome to the htpcBeginner HTPC News Roundup 2017 Wk 24. This week saw major updates to the Nvidia Shield TV and WeTek streaming media players, local file playback through the Plex Android app, Emby released for Samsung Smart TVs, and more. Read on for the latest in HTPC news and updates!

With its latest update, the Nvidia Shield gains compatibility with the Plex live TV and Plex DVR features. There's also enhanced 4K streaming as well as the functionality to record to network attached storage. Plus, enhancements arrive for Android security, 5.1 surround audio in casting to the likes of Netflix and VUDU, as well as remote firmware updates. [Read: 5 Best wireless Nvidia Shield TV controller options]

Emby is an excellent media server software option. While it's not surprising to see devices such as the Nvidia Shield TV gain feature enhancements, it's a pleasant surprise seeing Embygracing 2014 Samsung Smart TVs with an Emby app. In a June 9, 2017 update, Emby announced that Samsung Smart TV users based in the US can install the Emby app straight from the Samsung app store. Its interface utilizes HTML. However, it's different than the Emby web app ain instead includes the likes of WebAnimations, Polymer, Service Workers, and WebComponents. [Read: Setup Emby Server with Ordoid C2 - Alternative to Plex and Kodi]

WeTek makes some of the best Android streaming media players in its WeTek Play 2 and WeTek Hub. This week, WeTek released its WeOS 3.1 update for both the WeTek Hub and WeTek Play 2. Among the new features, WeOS brings an update to Android 6.0 Marshmallow. There's now Netflix 4K support via the Android TV version of the Netflix app. Furthermore, WeOS 3.1 yields an update do Kodi 17.3 which patches a major security vulnerability.

Open and play any video file on Android (Plex)

Among media streaming options, Plex ranks as one of the best software options available. It's different than Emby, and Plex also separates itself from Kodi. Recently, Plex added a live TV feature to its apps and further integrated with the Nvidia Shield TV streaming player. Now, the Plex for Android app gets added functionality: local file playback. With the Android app, users may now open and play any video with the native Android Plex app. It's a major update which further posits Plex as the go-to for streaming and local media playback. Although it's available on many client devices, this newest local file playback for Android debut migrates Plex toward an all-in-one media center solution. [Read: How to watch TED Talks on Plex - TED Talks Plex channel install]

A legal crackdown continues to target the home theatre PC space. This comes in the form of a growing Kodi piracy lawsuit as well as torrent sites going offline from both external and internal pressure. Recently, Europe's highest court ruled that Internet service providers should block The Pirate Bay. Because of this growing threat, the likes of ExtraTorrent.cc go offline of their own volition in fear of legal action. On June 13, 2017, a conglomerate of 30 companies including HBO and Netflix banded together to form an anti-piracy alliance. [Read: 8 Best BitTorrent clients for Linux distros such as Ubuntu, Debian, and Fedora]

With pirates continuing to share content illegally and moreover begin holding movies like Pirates of the Caribbean for ransom, content providers are ramping up their tactics as well. Known as ACE, the Alliance for Creatiity and Entertainment, its mission is to further efforts to squash piracy. Still, many excellent torrent sites prevail. Although it's usually torrent sites targeted, it's best to use a VPN if you frequently torrent or download via Usenet (note: we at htpcBeginner do not condone the sharing of copyrighted material. However, we encourage readers to use a VPN maintaining privacy with their Internet use).