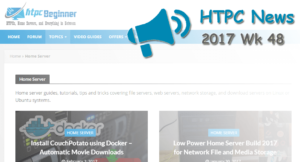 Welcome to the htpcBeginner HTPC News Roundup 2017 Wk 48. This week saw improvements to Plex's DVR feature, talk of another CBS streaming service, and more. Read on for the latest in HTPC news and updates!

Kodi v18 Leia is coming soon with a slew of new features and enhancements. But the last Kodi v17 iteration, Kodi v17.6, has been released. Fixes include a crash in controller dialog, standard scrapers updated to the latest version, and a potential connection issue for internal webservers fixes. It's predominantly a bugfix release, but regardless, any Kodi user is best served by upgrading.

Forget fast-forwarding, Plex DVR can now remove commercials for you

Plex continues to improve its already awesome platform. Earlier in 2017, Plex launched a live TV and DVR feature set which really benefits cord cutters. Now, Plex DVR gains the functionality to automatically remove commercials. Of course, Plex warns that this may take a long while to process and moreover may result in high CPU use. Nevertheless, it's a major upgrade for the Plex platform which posits it as a one-stop-shop for cord cutters.

Netflix is not going to kill piracy, research suggests

While it may seem that Neftlix and streaming services are the answer to piracy, spoiler alert: they aren't. Legal video sources are increasingly popular, but a study from Carnegie Mellon University and Universidade Catolica Portugesa revealed that over 50% of BitTorrent pirates who were given free 45-day subscriptions to premium movie and TV packages did watch more TV over that time period. However, their torrenting habits remained the same. Ultimately, it seems piracy is hard to beat.

CBS might turn ‘Entertainment Tonight' into its own streaming service

CBS is no stranger to streaming services with their CBS All Access, CBS Sports, and CBSN. Now, there's talk of making “Entertainment Tonight” its own streaming service. Thankfully, streaming services are super prevalent. Unfortunately, this abundance of services arrives with a downside in increased stratification. Essentially, while there are more and more services, you'll need several subscriptions to access everything you desire.

The Pirate Bay is constantly in danger of going down or being blocked by Internet service providers (ISPs). Among torrent sites, TPB is not unique in this regard. But as Express.co.uk reports, there's a growing blacklist of TPB. More than 40 countries have laws to block similar sites. For torrent fans, there are loads of alternatives to The Pirate Bay, from private torrent sites to general torrent sites. Plus, there are tons of BitTorrent clients for Linux.