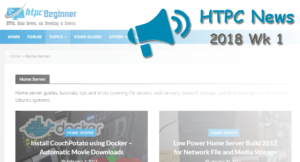 Welcome to the htpcBeginner HTPC News Roundup 2018 Wk 1. This week saw Kodi added to Xbox One, Spotify hit with a huge lawsuit, and more. Read on for the latest in HTPC news and updates!

Although Spotify assumed the post as arguably the most popular music streaming service available, it's recently been hit with an enormous law suit. According to Gizmodo, Spotify "...failed to pay songwriter royalties to a publishing company approximately 21 percent of the time." The company, Wixen Music Publishing, has filed a $1.6 billion lawsuit. Missy Elliott, Tom Petty, and Rage Against the Machine rank among the artists Wixen represents. [Read: 9 Best music server software options: Build your own Spotify]

However, this isn't Spotify's first legal battle. The streaming service has received several copyright infringement suits in the past, and supposedly spawned from piracy. Still, a lawsuit of this caliber and from a music publisher with a roster of big-name artists may set a precedent for future cases. [Read: How to install Kodi Spotify addon on your media center]

Is your Kodi setup being spied on?

Kodi remains one of the most popular home theatre PC (HTPC) open-source media centers available. It's available for installation on a bevy of platforms from PCs to Raspberry Pi devices. Plus, Kodi comes as an app or a standalone operating system such as OSMC or LibreELEC. TorrentFreak reveals that users still employing the web interface may be susceptible to spying. Kodi formerly included a remote control feature allowing for remote software management with a web interface. Unfortunately, many users failed to password protect the web interface. Therefore, their Kodi set up was left vulnerable to outside access. [Read: 6 Best legal Kodi TV show addons 2017 - TV show addons for Kodi]

In 2016, Kodi debuted its Chorus2 interface as a replacement for the web interface. Yet even with Chorus2 it's feasible for outsiders to gain access and browse information such as addons, or for increasingly insidious purposes, delving deeper into a Kodi setup to change system settings, disable peripherals, and more. It's important to note that using these features with a strong password should provide safety from penetration. [Read: The 6 Best legal Kodi movie addons 2017 - Movie addons for Kodi]

There's no shortage of media server software options available. While Plex is a fantastic choice, Emby is tailored to power users. Recently, Emby Server benefitted from an updated to 3.2.60. Highlights include enhanced multi-version support. For instance, it's easier to pick between different iterations of a film in your Emby library such as one with a commentary track or the director's cut. Now you can choose between the many cuts of "Blade Runner" stored on your Emby Server (pro tip: Skip the theatrical release). [Read: Setup Emby Server with Ordoir C2 - Alternative to Plex and Kodi]

The smart home space continues to thrive. While it's an area packed with devices, smart speakers stand as popular gadgets. Streaming device maker Roku dominates with its set top boxes and smart TVs, and now plans to plunge into the smart speaker realm. CNET reveals that Roku will partner with TCL on a line of smart speakers, sound bars, and whole-home audio devices. [Read: 5 Best Plex client devices 2017: Plex TV boxes to stream from server]

Raspberry Pi devices are super useful for a variety of tasks. The single-board PC can run a plethora of operating systems (OSes) including Linux, and is ideal for projects ranging from retro gaming machines with RetroPie and Recalbox to music servers and even torrent boxes. Despite its popularity, the Pi is far from the only such device in existence. Enter the Orange Pi One Plus. It's a $20 single-board PC which sports beefy specs such as HDMI 2.0a and Gigabit Ethernet. According to TechRepublic, the One Plus is capable of pumping out 4K video and even runs Android. It's a nifty board, but as TechRepublic points out, the Raspberry Pi may be easier for beginners. There's better documentation for the Raspberry Pi, alongside more OS options, software, and project ideas.

5 Best GPUs for HTPC use in 2018: Graphics cards for home theatre PC