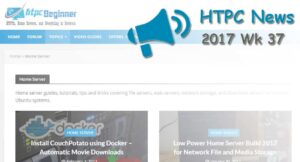 Welcome to the htpcBeginner HTPC News Roundup 2017 Wk 37. This week saw a 4K capable Apple TV announced, Disney revealed its complete withdrawal from Netflix, and the popular torrent tracker SceneAccess shut down. Read on for the latest in HTPC news and updates!

In a huge move, AT&T announced that it's now offering free HBO access to every unlimited plan. Before the Sept. 12, 2017 announcement, HBO was available for free to only Unlimited Plus subscribers, the premium tier. [Read: 13 best streaming apps for Xbox one – Streaming apps for Xbox One]

Moreover, AT&T has bundled in a $25 monthly video credit for Unlimited Choice subscribers. This is applicable to any AT&T video platform from DirecTV to DirecTV Now, and U-Verse. [Read: 12 best streaming apps for PS4 – PlayStation 4 streaming apps 2017]

Apple continues to dominate as a tech juggernaut. Their recent revelation of a forthcoming Apple TV brings 4K compatibility. Additionally, there's HDR support and Dolby Vision compatibility. It's available in a 32 GB and 64 GB variations.

What's more, pricing for 4K videos is set to stay the same as standard releases in 1080p. Plus, Apple plans to offer upgrades to 4K versions of video content. That's a huge win for the Apple TV and should incentivize adoption. [Read: 5 best Plex client devices 2017: Plex TV boxes to stream from server]

Goodnight, sweet prince. The SceneAccess torrent tracker is no more. It's operated as a phenomenal private BitTorrent tracker for over 10 years. But as of Sept. 12, 2017, it shut down. The operators report financial struggles. Like many private trackers, SceneAccess relied upon donations from community members.

Thankfully, a bevy of torrent sites present loads of opportunity for downloads. Plus, there's always Usenet. Whatever you're downloading, use a VPN or DNS. [Read: 8 best BitTorrent clients for Linux distros such as Ubuntu, Debian, and Fedora]

Disney to pull its Marvel and Star Wars content from Netflix

Earlier Disney announced their own streaming site as well as an ESPN-branded streaming site. However, at the time it was unclear whether Disney would pull out its Star Wars and Marvel properties from Netflix. Now, Disney CEO Bob Iger allows that Disney will, in fact, take its Lucasfilm and Marvel content off of Netflix. [Read: PlayStation Vue review – Channel lineups, DVR, and more]

Although streaming services provide a cheaper alternative to cable and satellite packages, there's increased strafitication. This, in turn, means that consumers must subscribe to more services, which negates the savings that come from shedding the shackles of cable or satellite. [Read: DirecTV Now review – Channels, DVR, and more]

This new broadcast syndication brings 24-hour programming which features highlights, live games, news, and more. This is huge and makes cutting the cord all the more feasible. Currently, Stadium is available at WatchStadium.com as well as its own mobile app, and through Pluto TV. Thanks to streaming and over the air options, it's increasingly easier to find streaming NFL games, as well as college football online and through Kodi.