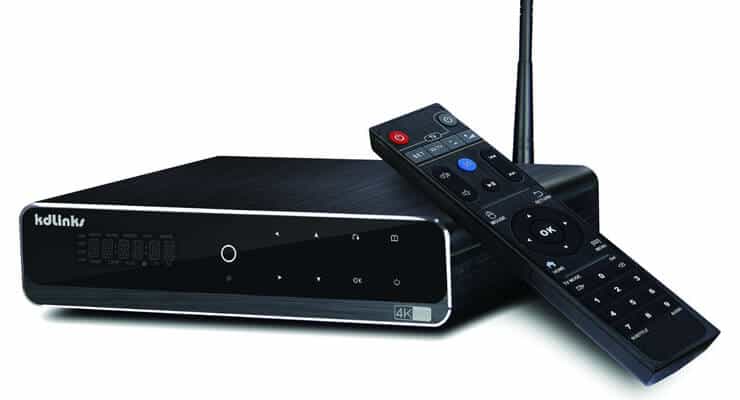 Think of an Android media player where storage space is not a concern. You probably don't know one. Most of these devices come with very limited native capabilities to store files, and if you want to expand your storage space, you have to resort to things like an external HDD compatible with USB ports, or a spacious microSD card which will still be insufficient for your media. In this KDLINKS A300 review, we take a look at an Android media player that holds most 3.5" HDDs inside its structure, enabling it to have lots of storage for your movies and media, in case you don't like streaming it from the 10 best Kodi movies addons or haven't figured out how to install Kodi Velocity addon yet on your media boxes. Don't believe me? See for yourself. [Read: NVIDIA SHIELD TV: An amazing option for your media center]

Meet the KDLINKS A300 media player. This insane beauty is as useful as expensive. For a bit less than 220 bucks, you can take this device -and its included remote- home. Why would you pay so much for an Android media box, when there are several Android media players below $100? Well, in this KDLINKS A300 review we have seen that you would pay for great hardware capabilities, as well as good connectivity and a friendly remote with some mouse functionality. No, don't get me wrong, you can't flick this remote in the air like you would with a Lynec C120 air mouse; however, you could press the mouse button and have the arrow keys move your pointer. A bit archaic, but a good alternative if you still haven't got your keyboard and mouse combo. This being said, and if you looked at the picture above, there's a trait this device doesn't share with its less-expensive brethren.

If you are one of those people that have amazing movie collections, yet not enough interest in setting up your own home server, then you will see in this KDLINKS A300 review that this device is for you. With hardware H.265 HEVC, 4k and 3D hardware decoding abilities, Dolby 7.1, and all the potential to install any apps you want from the Android Play store, the KDLINKS A300 Android box will surely meet and surpass your expectations. Some users have dubbed it a "media center Swiss Army knife", and they could not possibly be more right. Let's take a look at its tech specs and see for ourselves:

As you can see from this list of specs, the KDLINKS A300 Android box has an 8-core GPU and Quad-Core CPU, which together with the 2GB RAM this box contains, make it a device with a great performance which will bring to your TV a smooth media playback even for 4K movies and videos. Its connectivity options make it easier for you to hook up any peripherals, and the HDD 3.5" bay where you can put your own local storage, expands the capabilities of this device beyond your imagination, and reminds us of the barebones computers most home server enthusiasts use, although the KDLINKS A300 seems to not have the capabilities to be turned into a home server. As far as the KDLINKS software options go, you can pretty much install anything on it that would run on Android, which makes it very versatile and useful for the average user. [Read: Gigabyte Brix Pro review: A powerhouse for your HTPC]

KDLINKS A300 review: do you recommend this device?

Expensive device, that offers a novel feature that most Android boxes lack. If having a hard drive attached inside your Android media player is something you consider a deal breaker, or if you want to enjoy a media collection locally, then this device is for you. On the other hand, if you just want to stream media from the multiple addons you can enjoy with Kodi for Android, such as the 10 best live TV addons for Kodi, then you are better off looking into other less expensive options.