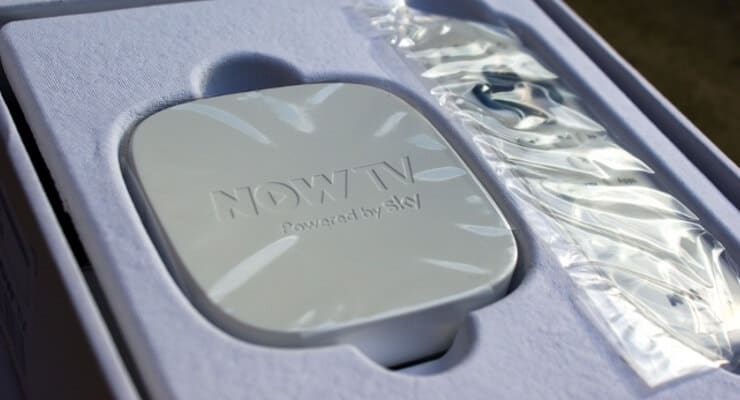 You may or may not have heard of the Now TV Box available from the satellite TV company Sky. In the UK, these little boxes are available for the measly sum of £10 ($16.82) which makes it excellent value for money. The Now TV Box is backed by three subscription packages which are film, entertainment, and sports: these are what makes Sky money.

The hardware is basically a rebranded Roku LT Player with a propriety app store bolted on. Apps available are rather limited to catch up services but Plex can be easily installed on this device, which instantly unlocks its full potential. Being cheaper than a Raspberry Pi and capable of play on-demand subscription content, this TV box may better serve the needs of many customers. [Read: How to install OpenELEC on Raspberry Pi on a Linux system?]

What is Included in the Box?

Once I had ripped open the outer packaging I found a rather bland looking white box with very little branding. This is obviously to keep production costs down therefore passing on the savings to the consumer. Inside the top layer of the box is a short, easy to read, instruction manual along with the unit itself and a remote control.

After opening up the second layer, to my surprise, I was greeted by a HDMI cable along with the power cable. So everything you need to get started is included in the package making this an absolute bargain for a media streamer. [Read: 7 Raspberry Pi accessories to build a XBMC media center]

A quick recap of everything that's included:

Setting Up the Now TV Box

Essentially there are only two requirements for setting up the box, these are a decent Wifi connection and a HD television. I suggest creating an account on the Now TV website before commencing with the set up because a username and password is required to complete the installation.

Grab the provided HDMI cable and plug it into your HD TV, then connect the power cable. Switch on your television and wait for the Now TV logo to appear.

The user interface of the Now TV Box is very impressive with it's clean, easy to use layout even for the biggest of technophobes. Following the on-screen instructions shouldn't be a problem, just remember to have your Wifi network password handy.

Sky supplements the cost of the Now TV Box by offering various subscription packages including films, sports, and entertainment. The most interesting of the offerings is the films package which costs £8.99 per month for newer, more recent films than Netflix. Sports and entertainment packages cost £9.99 and £4.99, respectively, but the sports package is on a daily basis not monthly.

These packages are an expensive way of watching Sky TV but for the occasional film or sporting event the prices aren't too bad. On demand apps are available, these include BBC iPlayer and Demand 5. More apps are available through the installation of Plex which we will go into further detail in a future blog post. [Read: The Ultimate Guide to Raspberry Pi OpenELEC Media Center Setup]

Included Apps with the Box

A media streamer is only useful when decent apps are available to use. The Now TV Box does have a somewhat limited amount of apps including various on-demand services such as the BBC iPlayer.

A selection of available apps are listed below:

Apart from these apps, there are various methods of "sideloading" third-party software onto the unit itself. Most notable of these is Plex which is capable of streaming from a centralised server in your home network. Shortly, we will be publishing guides about this method right here on Smart Home Beginner.

At £10 the Now TV Box provides excellent value for money and hands down beats the price of competitor's units. This box could be the perfect solution if you aren't a Sky subscriber but still want to occasionally watch their services. However, it can be rather expensive. If you're looking for a media streamer or Internet box for TV then this is ideal especially once expanded with the installation of Plex.

Hope this NowTV Review provided you a good primer. Let me know in the comments what you think of the Now TV Box or if you have any questions.