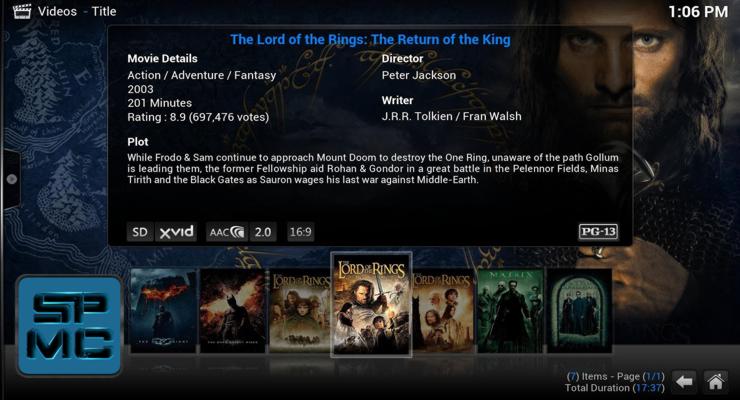 Users of Kodi app which was formerly known XBMC has been raving about this media player application that acts as an entertainment hub. If you have not gotten a chance to download it from the official website, it is basically a software application that can work on Linux, OSX, Android and iOS platforms. Kodi is not available on Google Play yet and may be downloaded from kodi.tv. However, there is some good news for interested users. Kodi has been forked and released on Play store under GPL open source license as SPMC or Semper Media Center and this is one of the best best known Kodi Alternative for Android, at this point. [Read: Plex vs Kodi – The Ultimate Comparison Guide for Beginners]

So what is SPMC?

Semper Media Center is an improved version of the famous XBMC. It ships with all of the Kodi features including the 10-foot user interface that can be used in TV’s and remote controls. The improved version allows you to play music and watch videos including other digital media like podcasts. The application can access local storage or the internet. However, this software does not come with its own media, you have to connect it to third party website or resources to watch and listen to your favorite clips and music. [Read: 20 Best Kodi addons in 2015 to help you cut the cord]

Why another Kodi Fork?

Releasing the open source Kodi app on Google play would have violated some copyrights. However, under GPL as open source there was no problem on releasing it on Google Market if the name was changed. With this in mind, an innovative developer known as Chris Browet (Koying) decided to take the app further. He simply patched the original XBMC and made a stable Kodi Alternative that can be downloaded in Google Play and App store for free under the name SemperPax Media center. Of course, this software is available for free download.

SPMC is a very good application that can support hardware video decoding on many Android based devices. The unofficial spin-off of the official XBMC app can work on your android powered phone without modifying security settings. In addition, it allows automatic updates because Koying keeps upgrading the fork regularly. By the time of writing this article, SPMC was based on Version 13.2 of XBMC but Kodi builds are available from SPMC's website. SPMC also adds suspend feature on rooted devices. In addition, recurrent startup crashes have been fixed and context menu has been added. Semper Media Center app can also switch TV to 3D automatically. [Read: 5 Kodi advanced settings I always use on media centers]

The Semper Media Center software can also access common android settings quickly. Furthermore, it can be installed on any device that can run Android 4.0 or higher and it occupies a relatively small space of 53MB (equivalent to a dozen MP3 Songs). With this app in place, you can play anything from your device from the music library. You can even read media from external storage. SPMC can open network sockets and write to external storage and has a power manager that can lock or wake the processor to avoid unnecessary screen sleeping and dimming. So until Kodi releases their official version via Play store, SPMC is currently the best Kodi Alternative!