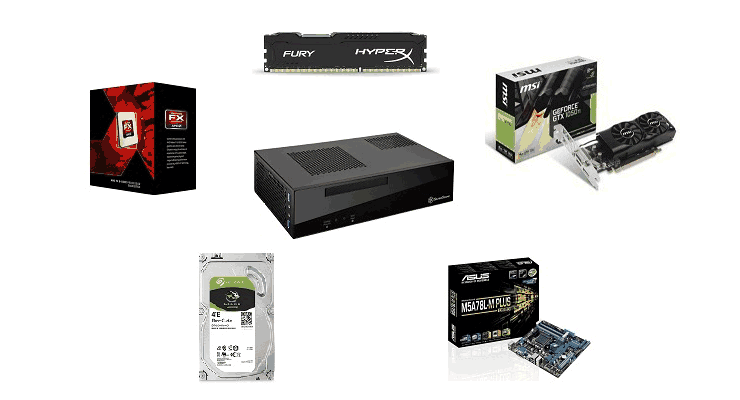 2017 will see a boom in the number of 4K ready TVs and monitors sold worldwide. If High Definition (1080p) was anything to go by it will certainly take off. A 4K resolution makes video content look sharp and games more realistic than ever before. It will be some time before we get a broad range of TV stations for 4K screens but we are already seeing 4K movies and games. In this post I am going to show you the best medium budget 4K HTPC Build 2017. With this media center you will be able to play and stream the very latest movies and video content in full 4K resolutions. This solution can also be used as a 4K gaming HTPC capable of running all of the latest PC game titles. [Read: What is HTPC, aka Home Theater PC, and what is it used for?]

In my previous post, I showcased a high-end HPTC Build 2017 to do it all (Kodi, Plex, Gaming, and NAS). For this build we are not going all out on performance components. Our aim is to build a media center capable of playing 4K video content and with enough power for 4K gaming. Our 4K HTPC build 2017 will be suitable for use with both Kodi media center and Plex. A 4K Plex HTPC must have ample storage for audio and video content along with the relevant components for streaming. Plex has specific CPU transcoding requirements which will be taken into consideration (explained later). Also a 4K Gaming HTPC must have a suitable graphics card capable of running the latest 4K PC titles. Our Medium Budget 4K HTPC Build 2017 will fit into a $600 total price bracket.

Please note that in this build I specify the core components with the exception of the power supply. For a suitable PSU I recommend the SilverStone Technology 450W SFX. This will provide enough power for the components and will fit the chosen case.

If you have just purchased a new 4K TV then the chances are it looks the part! You are of course going to want a HTPC case that is just as easy on the eye and so for this build we are going for compact and low profile. Silverstone Technology creates the very best HTPC cases for the mainstream market. Their cases are compact, innovative and look great. For our 4K HTPC Build 2017 I am going to use the Silverstone Technology ML04B. The ML04B is a low profile case supporting the micro ATX motherboards.

Despite being a small case the ML04B comes with plenty of space for expansion. You can install 2 internal hard disks creating huge storage areas for your media content. Perfect for a 4K Plex HTPC. The ML04B also supports multiple expansion cards allowing you to implement your gaming power. Due to the depth of the case low profile graphics cards are required. The ML04B is compact, easy to manage and will look perfect next to your new 4K TV. Power supply not included. [Read: Energy efficient budget HTPC-NAS combo build 2016]

As this solution is for a 4K Plex HTPC we need a decent processor and must address transcoding. Plex transcoding is the process where Plex media server encodes your video content into the optimal format for the receiving client device. The AMD FX8320 will support up to 4 simulataneous streams of the same video file. With AMD CPUs you tend to get more power for your money and they can be around 70% of the price of their Intel equivalent. This CPU is no exception to this. The FX8320 is a good choice for Plex transcoding as we get multiple streams at a good price. If you require more than 4 simultaneous Plex streams then the Intel range offers more choice for this but they would be difficult to fit into this budget. [Read: Install Plex on a Windows 10 media server in minutes]

The AMD FX range was the first CPU line to offer an Octa core CPU solution. With 8 cores an AMD FX8320 will give us great multitasking performance and provide real benefit to our games. It has a base clock rate of 3.2GHz which can be boosted to 4.0GHz using AMD Turbo Core. Turbo Core is a technology that will temporarily overclock the CPU when your PC conditions are right. The FX8320 is currently one of AMDs middle of the range CPUs but fits the bill for a 4K Plex HTPC.

For our motherboard we need a device of micro ATX form factor and that supports our chosen CPU. A great choice for this is the ASUS M5A 78L-M. The motherboard will fit nicely into our selected case and offers some great features. It will take the AMD FX9590 CPU and there is plenty of room for upgrade should you require it later down the line. In terms of memory you can pack it with a maximum of 32 GB and it will take DDR3 memory modules upto speeds of 2000MHz.

The ASUS M5A 78L-M is a great motherboard for storage and peripherals. It comes with a total of 6 SATA ports and no less that 12 USB ports. This is a great feature for a 4K Plex HTPC as it will give us plenty of storage options later down the line. If this media center solution is to become your main Plex media server then you have Raid 0 & Raid 1 options for your disks. You get a decent on-board sound card that will meet all of your audio needs. One of the only drawbacks to this motherboard is the lack of on-board Wifi devices. You can easily add a Wifi card but as this system is designed to be a plex media server it needs to be wired in! [Read: Combine Plex and Kodi - Get the Features of Boyj Using PlexKodiConnect]

The memory standard currently at the top of the charts (for desktop PCs) is DDR4. Being the market leader DDR4 is as expected rather pricey and a little out of the budget for this 4K HTPC build 2017. Our aim is to provide a 4K media center for Kodi, Plex, and gaming and for this DDR3 is more than adequate. DDR3 1866MHz will run the latest 4K PC game titles and will last you for at least a couple of years.

Kingston HyperX Fury 8GB DDR3 1866MHz memory is the perfect choice for this project. The HyperX Fury memory DIMM range are reliable modules and offer the level of performance we need. We are going for a single DIMM leaving us room for upgrades in the future. As we are including a dedicated GPU in our design we have little reason to go higher than 8GB and at this stage more would be overkill.

A 4K Plex HTPC needs good storage capabilities. If this is to be your main Plex media server then you will need enough storage for large video libraries. Large storage areas can be the most expensive part of your build. Going in at the 4TB mark is the sweet spot as this will give us space for plenty of content without breaking the bank.

For this the Seagate 4TB Barracuda is the perfect choice. Seagate is one of the world leaders in hard drive technology and the 4TB Barracuda is around 20% cheaper than its Western Digital counterpart. This is a SATA drive operating at 6GB/S with decent cache. The 4TB Barracuda is efficient, reliable and the perfect storage solution of or 4K Plex HTPC. [Read: Plex and VPN: An excellent combination for your home server]

A Gigabyte GeForce 1050 Ti will support all PC gaming titles for 2017 and it will be a few years before you will need to upgrade. The card uses the NVIDIA chipset with a maximum clock rate of 1392MHz. The 4GB of DDR5 memory will allow stunning visuals and fluent rendering. It has a power consumption of only 75W which is energy efficient for a good GPU. The MSI GTX 1050 TI 4GB graphics card is compact, energy efficient and will give us the performance required for our 4K videos and gaming.

4K video playback and gaming is easily achieved and at a very affordable price. In this 4K HTPC build 2017 project we have created a compact low profile 4K gaming HTPC that is perfect for Kodi and Plex. Our medium budget solution gives us a media center that caters for 4K resolutions but without the price tags of some of the latest performance components. Although this is a medium budget 4K HTPC we have left the door wide open for future upgrades. The motherboard was selected for its vast array of expansion ports and CPU compatibility. We have only used a single memory module so an additional 8GB could be easily added. Our low profile case has room for additional hard disks and with this solution also a 4K Plex HTPC we have the option to use RAID. Don't forget to add a suitable PSU and for this I recommend the SilverStone Technology 450W SFX. Total cost of build is less than $650!