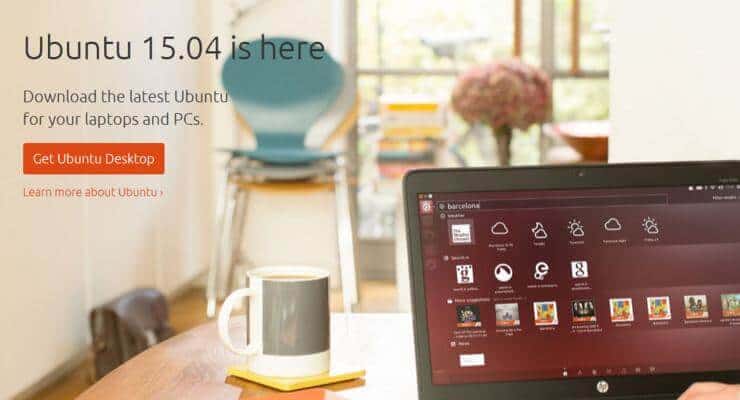 Ubuntu 15.04 release date was yesterday, so Vivid Vervet is already out into the wild. As you probably know, Ubuntu is a Linux distribution which integrates the latest and most prominent open source technologies, with a focus on providing ease of use and a high standard of quality. It is based on free software and its default desktop environment is Unity. Ubuntu installations include applications such as LibreOffice, Firefox and Thunderbird; and the applications run on low level privileges by default, consistently with Ubuntu’s principle of being a secure software out-of-the-box. Run Ubuntu on Raspberry Pi 2 with Ubuntu MATE]

This operating system has got a new release, under the code name “Vivid Vervet”. Ubuntu 15.04 includes a few improvements, to the Unity Desktop, Linux Kernel, Boot and Service management, and other aspects of the Ubuntu experience. The Ubuntu 15.04 Vivid Vervet release is an update that includes improvements that focus on bringing to the end user a polished feel and a better usability, combined with some necessary bug fixes. The end result is a Ubuntu release that gives a better user experience than its predecessors.

There are a number of improvements in Ubuntu Vivid Vervet related to security and performance on the Linux Kernel 3.19. Some of them are:

Ubuntu 15.04 is the first release that includes snappy Ubuntu Core, a new Ubuntu rendition that uses a new, transactional packaging system: snappy.
‘Snappy’ Ubuntu Core is the smallest and most secure edition of Ubuntu. It is a super-lean, transactionally updated version of Ubuntu, perfect for inventors, technologists and the active and growing Ubuntu developer community, for cloud container hosts and smart, connected devices. It powers drones, robots, network switches, mobile base stations, industrial gateways, and IoT home hubs.

For a complete list of changes, including the most technical ones, you can refer to the Ubuntu 15.04 Vivid Vervet official release notes

To upgrade on a desktop system:

To upgrade on a server system:

Note that the server upgrade will use GNU screen and automatically re-attach in case of dropped connection problems.

There are no offline upgrade options for Ubuntu Desktop and Ubuntu Server. Please ensure you have network connectivity to one of the official mirrors or to a locally accessible mirror and follow the instructions above.

Warning! Ubuntu 15.04 Vivid Vervet uses Systemd instead of Upstart. Therefore, your init scripts will break upon upgrade. If you have a home server running Ubuntu 14.10 or older we recommend sticking with it for a little while.

These are way too many changes! Can I use Ubuntu 15.04 for a home server or an HTPC?

Yes, you can! With the ability to run Ubuntu 15.04 Vivid Vervet on systems such as the Raspberry Pi 2, as well as upcoming guides on the subject that we will be posting shortly, you can take full advantage of this new operating system which is scheduled to have support from Canonical during 9 months, until January 2016. With the bug fixes present in Ubuntu 15.04 release as well as the improvements to usability and speed, it will surely make for a good user experience on any system you plan to use it on.