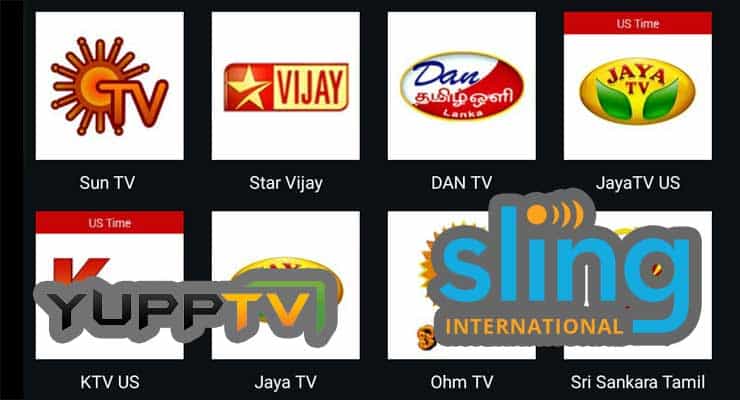 Recently, I had to figure out what the best way was to watch Indian TV channels online. More specifically, I wanted to stream Tamil TV channels on Amazon Fire TV. As many of you may know, I am a cord-cutter. My mom is visiting me for a few months and I had to figure out how to watch Tamil channels in USA. I am sure there are traditional methods of subscribing to Indian TV through cable or dish companies. But getting the Tamil TV channels I wanted (mainly, Sun TV and Vijay TV) was very difficult, let alone expensive. While researching I stumbled upon YuppTV and Sling TV. YuppTV was cheaper. But, I have used Sling TV before and I was happy with the service. Not much information was available on these two services to stream Indian TV. So I did some testing and in this post, I am summarizing a comparison of Sling TV vs YuppTV to watch Tamil TV channels. [Read: 5 Websites to watch College Football online for free]

Last year, when my parents visited me I was looking for a service to stream Tamil channels on Kodi on Raspberry Pi. I tried Watch Sun TV service, which offered a Kodi addon. It worked, but many times the live stream would just stop and I had to find another server. It was challenging for my less tech savvy parents to use it without frustration. This year, my situation is slightly different in that I wanted to stream Indian TV on Amazon Fire TV and not OpenELEC on Raspberry Pi. I shortlisted two services: Sling TV or YuppTV. Both had Android and Fire TV apps. Hopefully what I found helps others in making a decision. While this post is focused on Tamil TV channels, I think that my findings would apply to Hindi, Telugu, Malayalam, and other languages too. [Read: 10 Best Amazon Fire TV apps for media streamers] 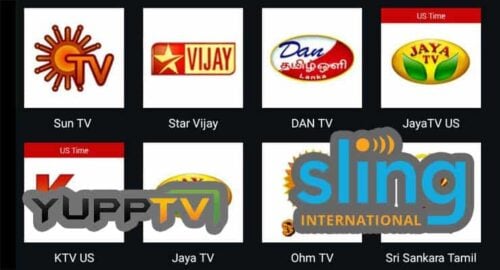 As stated before I was looking to stream live Tamil channels such as Sun TV and Vijay TV. However, if you are looking for other languages you are in luck. Both YuppTV and Sling TV offer packages for various language as listed below:

YuppTV vs Sling TV offers packages in 3 more Desi languages. This may be of importance for some people. For me, both Sling TV and YuppTV offered Tamil Live TV packages with both Sun TV and Vijay TV, although prices were different.

Both YuppTV and SlingTV offer trial periods. Therefore, you can test both out before choosing one. However, there are some difference in the trial offers. Sling TV offers 7 days of trial. To get started, you will have to create an account and provide a credit card. After 7 days your credit card will be automatically charged for the package you chose.

At the time of writing this article, YuppTV free trial period was 14 days. Sign up was easy through the YuppTV App on Amazon Fire TV or Android Device. YuppTV compared to Sling TV required only email, password, and phone number to activate a trial. No credit card was required, which in my opinion is a big plus.

YuppTV offers 5 packages of Tamil language TV channels: Diamond, Platinum, Silver, Gold Star, and Gold. In addition, combo-packages with Hindi, Telugu, and Sinhala are also available. Going into details of what channels are in each package is beyond the scope of this post. All package information can be found on YuppTV's website. I chose the lowest costing package that had both Sun TV and Vijay TV. This was the Diamond Package ($23 per month, $75 per 6-months, and $160 per year).

Sling TV vs YuppTV offers more than 5 packages, including, Tamil, Tamil Super, Tamil Mega, Tamil Jaya, and Tamil Gold. For me to get Sun TV and Vijay TV through Sling TV, I had to choose Tamil Gold for $40 per month. Both Sling TV and YuppTV seem to offer Sun TV in US local time. In addition, YuppTV also offered Sun TV in Indian time.

Winner: YuppTV (slight edge) - Both offer several packages but Yupp TV has Sun TV live in USA time and Indian time (this was important for my situation).

Signing up for Sling TV or YuppTV through the web was a simple process. I did have site errors while accessing YuppTV website on Google Chrome. As explained above, signing up for Yupp TV through website required no credit card while Sling TV required a credit card. One could also sign up for both services through their respective apps.

Sling TV signup through the app was lengthy compared to YuppTV. There were 4 pages of information that were needed (see picture below), along with billing information.

On the other hand, YuppTV required only email, password, and phone number. I did have to confirm my phone number through a text, which was painless. To subscribe to a package after trial, you will have to provide billing information.

On YuppTV, the Diamond package offered Sun TV and Vijay TV among several other Tamil TV channels. Monthly subscription was $23 per month. At only $12.5 per month this was cheaper than even the yearly package.

Winner: YuppTV - much cheaper than Sling TV for what I wanted.

Sling TV compared to YuppTV was definitely better when it came to hidden costs. With Sling, the final cost was subscription cost + tax. That is it (see picture below).

YuppTV on the other hand, threw quite a few things at me. First, when I added the 6-month Diamond package, it automatically added Hindi Addon and YuppFlix for extra cost, as shown in the picture below. I did not choose or want these extras. If you don't uncheck these, you will be charged extra. It can be quite difficult to reach YuppTV customer service to get this back or cancel the extras. So watch out.

In addition, YuppTV added $10 for account activation and $10 per device activation, both of which were not listed anywhere. So another $20 that I did not expect to spend. In the end the 6-month package came to $95.

Both Sling TV and YuppTV offered free simultaneous streaming on my Android phone. This tells me that one could stream for free on any of the Android media players without additional cost. When my friends visited, they were able to watch Hindi live news on their phones without any issues.

Both services to watch Indian TV channels online support several devices and platform. Support devices are listed in Sling TV's website and YuppTV's website but here is a quick list:

Whether you are trying watch Hindi TV live, Tamil, or any other language, the App interface is a key feature. In my case, I wanted something that is simple and clutter free (think ease of use for 65-year old parents). Sling TV's interface in my opinion was very cluttered and confusing, as shown below. One nice feature though: it offered TV guide information for what's currently running and what's coming (only for some channels).

YuppTV's homescreen was clean and simple, divided into several activities. I was only interested to watch Indian channels in USA. So I would go into Live TV. YuppTV does offer 7 days of catchup, which is a nice feature to watch Tamil serials online (other languages available too) in case you missed it over the last week.

Under "Live TV", YuppTV app presented a nice list of channels with icons big enough to easily navigate and pick. Another feature I liked is the list of recently watched channels at the top. While my parents had no problems using YuppTV's app, even I preferred this simple interface.

It is nearly impossible to freely stream Indian TV channels in high quality. Even some of the paid services don't offer great quality. Last year, I had an acceptable quality stream from Watch Sun TV. For $40 per month, I expected better quality streaming from Sling TV. As you can in the screenshot below, the picture did not cover the entire screen and the picture was not crisp.

YuppTV vs Sling TV was way better in stream picture quality. While screenshot below does not show the same scene, YuppTV picture quality is noticeably better.

I think everybody wants to watch Indian TV channels hassle-free. Fortunately, in my 2 weeks of testing I never had any issues with Sling TV or YuppTV. Cancelling Sling TV subscription is very easy through their website (see picture below). But I did have to reach out to Sling TV's customer support because I was 2 hours late in cancelling my trial and they charged me for first month. Sling TV's customer support was great. While they tried to sell me their service, they were gracious enough to refund the charge.

While researching online, I found that many complained about the inability to reach YuppTV's customer service. There are also complaints of not being able to cancel monthly subscriptions with ease. I could not verify these complaints. However, the number of such bad reviews is high enough that I am inclined to think there is some truth to it. Since one does not have to provide credit card to start a YuppTV trial, cancellation of trial should be no problem. My account clearly says that the service will end after 6 months and wont be auto-renewed. Since you will be pre-paying for half- or one-year service, I suggest using a virtual credit card number if your bank supports it. But note that YuppTV does not offer refunds as detailed in their FAQs (see picture below).

I never intended to write such a long post. But, I am sure that the information here will be of use to others as I could not find reliable information during my search. As you can see from the above Sling TV vs YuppTV comparison, YuppTV won in 9 out of 11 categories. YuppTV was not only a lot cheaper but I felt that the picture quality was better too. So for now, I am set on YuppTV. But I hope that that I never have to reach their customer support. Hopefully this post helps you figure out what is the best way to watch Indian TV channels for your situation.